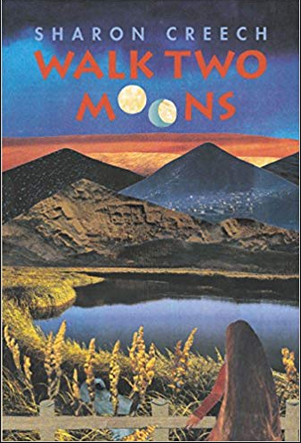 I have put off writing about Walk Two Moons by Sharon Creech for weeks (months now) because I can’t figure out quite what to say about. I’m really quite surprised that I enjoyed this book so much; it’s the sort of thing that usually wouldn’t appeal to me in the least. And yet, for some reason, I really did like it. I think part of it was that I did the Walk Two Moons audiobook in the car, so I could just let the story wash over me and start really concentrating once I was in to the story itself, rather than getting fed up with the odd style quickly and giving up.

It’s the story of Salamanca (who goes by Sal because really, who would go by “Salamanca”?) and her car trip with her grandparents to find her mother who has been gone a year. You get the feeling early on that the mother might be dead, but it’s hard to tell; she’d left on a journey of some sort and never returned. Sal never says if she is or not, although her father keeps telling her that her mother is never coming back, and you can’t quite determine if she’s trying to convince herself that’s she’s not or if she really doesn’t know herself.
To pass the time on the trip, Sal tells her grandparents the story of her friend Phoebe Winterbottom, who’s mother disappears one summer for an extended period. Sal and Phoebe met after Sal’s mother disappeared and Sal and her father moved to a different city, near a woman named Margaret Cadaver (and you also have no idea how she’s connected to Sal and her father or why they would move to be near her).
Phoebe begins finding strange notes, with little saying on them such as “Never judge a man until you’ve walked two moons in his moccasins.” At the same time, a strange boy starts showing up in the neighborhood (Phoebe names him “The Lunatic” and is sure he is coming to kill them all in their sleep). And then Phoebe’s mother disappears. Phoebe is desperate to believe her mother was kidnapped or murdered by The Lunatic, but this seems unlikely, seeing as she left them a freezer full of frozen casseroles with directions for cooking and serving.
There are loads of little anecdotes that Sal shares with her grandparents, both about her experiences in school and with Phoebe and about her old life in Bybanks, Kentucky with her parents. All of these are interesting and unique and tie flawlessly into the overall plot.
The time issue is quite interesting and well-done, with three layers of storyline. There is the car trip, the story of Phoebe Winterbottom, and Sal’s earlier childhood memories of her mother. All of these fit smoothly together, complimenting each other and enriching the whole story. And when the story concludes and the mystery of Sal’s mother is revealed, every bit fits into the whole perfectly.
The narrator in the Walk Two Moons audiobook was really superb; when I looked at the amazon.com review to refresh my memory of the names, I could instantly hear the narrator’s voice pronouncing the names of the people and the towns traveled through.
I’m surprised I’ve never heard of Walk Two Moons by Sharon Creech, since it really is lovely. I’ve noticed that many many of the Newbery books (especially the more recent ones) focus on family conflicts or loss of family members, but Walk Two Moons does so more subtly and more beautifully than most.

If you liked this review of walk two moons by sharon creech, you might also like these books: