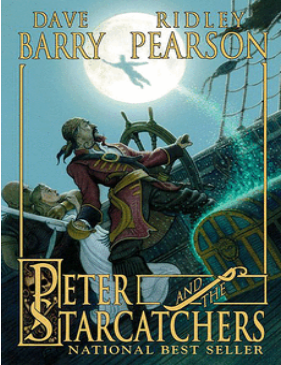 I love Dave Barry. My parents both adore Dave Barry, as does my grandmother, and they’ve been reading or handing off various columns and books of his to me for as long as I can remember. I’ve read practically every column he’s ever written and most of his books. For some reason, though, I’ve never read his novels, Big Trouble and Tricky Business. I love his non-fiction columns, so I was less interested in his fictional books. Then, when I went home for Christmas, my brother was reading the second of Dave Barry’s juvenile books, called “Peter and the Shadow Thieves.” I asked him how they were, and he raved about them. Even at eleven-years-old, I trust his advice, so a few weeks ago (I clearly don’t trust his advice in a TIMELY manner), I picked up the first one at the library.

peter and the starcatchers

This is a fun book and is the first book in the Peter and the Starcatchers series. I think I’ve mentioned before that I really adore re-tellings of classic or widely-known stories. I think Beauty (Robin McKinley) is excellent, and I love Ella Enchanted (Gail Carson Levine). There’s just something so thrilling about watching the pieces fit together when you already know what the end result is. Peter and the Starcatcher book fits right into that category. It’s the story of how Peter Pan became, well, Peter Pan.

Peter is an orphan and, along with four or five other boys, is being sent from England on a ship called “The Never Land” to some unknown destination. On the ship, he meets a girl named Molly, who is accompanied by her governess and who’s father is on a different ship, the best ship in the Royal Navy, named “The Wasp.” Peter and his friends are stuck in a disgusting little cabin with hardly any food (the food they do get is crawling with bugs). One night, while foraging for food, Peter finds a cabin with a sleeping guard in front of it. Inside the room is a trunk and above the trunk is a floating rat.

After a few more days of poking around, Peter finally corners Molly and forces her to explain what is going on. She tells him that the trunk contains something called “star stuff” which gives people extraordinary abilities (including the ability to fly), but, in the wrong hands, can be terribly destructive and dangerous. For centuries, a group of people called “star catchers” have watched for star stuff to fall from the heavens and find and destroy it before the “others” (who would use it for their own evil plans) get a hold of it. Her father is a star catcher and is on The Wasp, supposedly guarding the star stuff until it is taken to a place where it can be safely gotten rid of. Unfortunately, the trunks have been switched, and the real star stuff is aboard “The Never Land,” unbeknownst to Molly’s dad.

Meanwhile, the pirate captain who is feared all over the world, Black Stache, has heard from a captured English sailor that The Wasp holds, in a trunk, a treasure such as the world has never seen. Desperate to get his hands on it, Black Stache runs down The Wasp and takes it over. Of course, the treasure isn’t on it, but he quickly realizes where it must be. Molly’s father, recognizing the deception as well, is frantic, worrying about his daughter and the star stuff aboard The Never Land.

The rest of the Peter and the Starcatcher book is full of your standard pirate fare – storms at sea, mermaids, an island, natives bent on killing anyone who comes to their island, etc, etc, etc. But it does a good job of not getting cliche-ish, and it’s just so fun to see how it works itself out, along with planting some of the elements of the original Peter Pan story. Where does Tinker Bell come from? How does Black Stache become Captain Hook? How does Peter Pan learn to fly, and how can he do so without the aid of pixie dust?

It’s a fun story and a fast read (despite being several hundred pages long). I definitely enjoyed it, and I can see why my brother liked it so much.

I picked up the second book, Peter and the Shadow Theives recently and am a few chapters in. When I’m done with the Peter and the Starcatchers series, I’m looking forward to rereading J.M. Barrie’s original work, since I haven’t read it since I was in elementary school. Apparently this book follows more the Disney Peter Pan movie, rather than the book (and the prequel, Peter and Wendy), which apparently bothered some amazon.com reviewers, but, even as a stand-alone book it’s a good time.

If you liked this review of peter and the starcatcher book, you might also like these books: