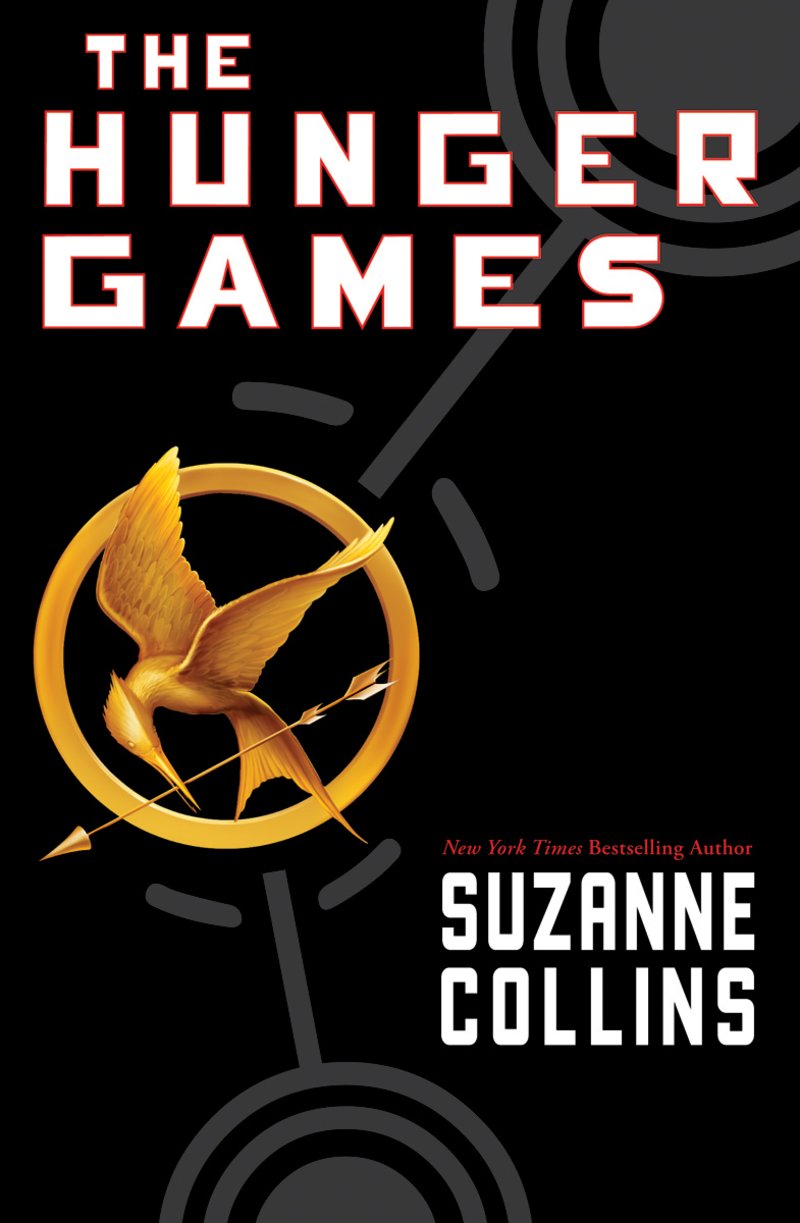 10 of 10: This is easily in the list of top five books I’ve read this year. Highly, highly recommended.

The Hunger Games book came in on the second or third day that I was doing the Notable Books project and I was so excited to see my first advanced copy that I snatched it up and ran home with it (that’s a lie, I totally drove). And then I didn’t look at it again for months. I saw a few extremely favorable reviews here and there, but still, it sat on my shelf as I read other things. Finally, I took it on vacation, promising that I’d at least start it on the plane. And once I finally picked it up, I couldn’t put it down. It was as good or better than everyone had said.

I can’t say enough good things about it. The writing is just pitch-perfect, dragging you right into a world you’d hate to live in, but can’t look away from. I tried to do a little summary at the top, but I can’t adequately describe it in just a sentence or two.

The former countries of North America have been run down by disease, famine, and war, until they dissolved completely. In their place, the Capitol with 13 surrounding districts took power. For a while all was calm, but then District 13 rose up and tried to rebel. The Capitol crushed them, of course, and peace returned but the Capitol, determined to remind the remaining 12 districts that they are powerless, institutes the annual Hunger Games.

Each year, the names of all the boys and girls ages 12-18 are put into a drawing and one boy and one girl from each district are selected to go fight in the Hunger Games. The 12 girls and 12 boys fight to the death until only one remains. The whole thing is televised and required viewing for all the districts.

Katniss lives in District 12, one of the poorer districts, and she spends much of her time hunting since she is responsible for feeding her family following her father’s death in a coalmine seven years earlier. She has also put her name into the drawing extra times in exchange for extra rations of food (as many in her district do); the number of times your name is entered also increases each year – 1 for the year you are 12, 2 the year you’re 13 and so on, so she knows her chances of getting her name drawn are fairly good. Instead she is stunned when her younger sister, Prim, is chosen instead – after all her name was only in the pool once.

Determined to avoid the fate of watching her sister murdered on television, Katniss volunteers to go in her place. To add to the injury, the boy who is chosen from the district is her same age, Peeta, the son of the baker, who, after her father’s death, risked his mother’s wrath to give her two loaves of bread. She has always liked him and felt in his debt, but now they will be mortal enemies in the Hunger Games arena.

The two of them board the train that will take them to the Capitol and soon Katniss recognizes just how bright Peeta is and she begins to believe he’s being nice to her in order to win her trust and thus making her easier prey. Then, the day before the games begin, each of the 24 participants have their televised interview and Peeta, who goes last, is asked about his girlfriend. He admits that he doesn’t have one and that the girl he’s liked all his life probably didn’t even know he existed until his name was drawn. All the other boys like her, he says, and the interviewer responds that this is any easy problem. Just win the games, go home a hero, and she’ll be falling at his feet.

Alas, Petra explains, this won’t work for him because she’s in the Hunger Games too.

Now Katniss is furious, feeling that she’s been made to look like a fool, but he tells her later that it was only to make her more memorable and likable and that he’d planned it with their trainer. Was it a trick or does he really like her?

And then the Hunger Games begin and it’s a fight to the death for everyone. Despite the gory premise, it’s not particularly violent or disturbing, although there are several deeply emotional scenes.

Everything about the book is perfect. The characters are well developed, especially Katniss who is strong and smart and likable, despite her prickly outer shell. Peeta, too, is wonderful, even though it’s hard to tell for a very long time if he’s trustworthy or not. The writing is strong and the plot is quick-paced. I couldn’t have loved this book anymore than I did. Although the plots are very different and the target audience is clearly older, this book reminded me strongly of The Giver – the same uncertainty, powerful government, and unquestioned way of life.

A few reviews I have read note that The Hunger Games book does not fall easily into the boy or girl camp. Yes, the main character is a girl, but there is also a main boy. There’s fighting and weapons and politics and there’s romance and nifty clothes (a flaming cape, anyone?) and family. It’s a great read whether you’re male or female.

At the end of the book, it declares “End of Book One” and I’ve since learned that it is going to be a triology. Unfortunately, this first one hasn’t even been published yet, so I know it will be quite a while until the next one comes out. I won’t wait four months to crack open that one.

I’m certain that this book will be nominated for dozens of awards once it’s published. If it isn’t, well, I’ll just lose hope in mankind, that’s all.