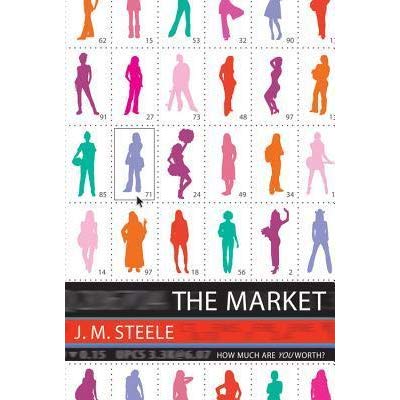 The Market is a fun, fast read with a clever premise and surprisingly likable characters. When Kate discovers that her classmates have started an underground stock market with each of the senior girls ranked as stocks and she is 71 out of 140, she decides to buy into the game and see how far she can raise her value before graduation. Recommend.

Last year, Jen Robinson wrote a review of this book and I’ve been dying to read it ever since. Unfortunately, she had read an advance copy, so it wasn’t yet available. And then my library didn’t order it when it did come out. Oh, life was difficult.

But then, on Thursday when I was working on the Notable Book project for my professor and sorting the books that had been sent in by publishers in the last few days, I saw a brand new copy in one of the filing cabinets. Obviously, I took it with me (this is totally okay, by the way, since part of the project is for me to read and review as many of the books that come in as possible).

I had most of the day to spend on campus, so I holed up in the library and read the whole thing in one sitting. And it was a deliciously fun book – just right for the beginning of summer.

the market by J.M. Steele

Kate is a high school senior, only a few weeks away from graduating from high school. She’s not extremely popular, but she’s definitely not unpopular – she has great friends, is good-looking enough, and smart.

But then, she discovers, from a mysterious source, that there is an underground stock market being run by members of the senior class. Each of the 140 girls in the class are ranked like stocks (blue chip stocks, junk stocks, etc) and their value fluctuates daily. In order to be part of it, you have to pay $500 and then the person with the most valuable portfolio at the end of the school year takes the whole pot of $25,000.

To Kate’s horror, she’s a junk stock, ranked at 71 of 140. Devastated, she turns to her friends and one of them suggests they turn things around. They’ll buy in to the market, purchase stocks on Kate, give her a mega-makeover, watch her stock soar through the roof and then take the jackpot at the end of the year. A perfect plan.

Kate gets a haircut and some better clothes and begins acting more confidently. To her surprise, it seems to work – the cutest boy in school, whom she’s liked forever, starts taking an interest in her. She’s invited to all the cool parties. It all seems to be going according to plan.

But it all starts getting a little out of hand, too. One of her friends tells the whole school that Kate’s grandfather died which makes everyone feel bad for her and consequently makes her stock value rise even more. But now Kate feels terrible that she’s lying in order to be popular.

And the cute boy has a best friend who clearly likes Kate; before all the market madness began, Kate would have been thrilled by his attentions, but now she fears that dating him will stop her upward movement – clearly it’s better to wait for the more popular boy and watch her stock soar. As she finds herself thinking these things, she recognizes that she’s changed more than just the color of her hair – knowing about the market and reacting to it has changed the way she sees – and more importantly, treats – her classmates. She’s turned herself into a brand that needs to be marketed.

This Market isn’t ground-breaking literature, of course, but it does have some qualities that keep it from being standard Young Adult Chick-lit. Obviously, the clever plot has something to do with that, but the strength of the characters, especially Kate, keeps it engaging and thought-provoking. These really are some characters you can relate to. The way Kate reacts to the discovery of the market, her fears as she tries to become popular, and her self-image as she begins to succeed are all very realistic – thoughts I could imagine myself having if I was in such a situation.

It also was a fairly good description of high school; I always roll my eyes a little at movies like Never Been Kissed (hello, worst movie ever) because high school just really isn’t like that for very many people. This one had a lot of normal people with the cool groups of people mostly ignoring the unpopular people, rather than making large cruel demonstrations. The occasions where people had their feelings hurt or friendships harmed were done in small groups, in quick and fast-moving scenes, which I thought was far more realistic than a massive cafeteria throw-down or something equally unlikely.

And the book, narrated by Kate, was written the way a teenager would talk and think, not the way a person who graduated 25 years ago thinks they should talk. It isn’t trying particularly hard to be cool or cutting-edge; the writing just works.

I wasn’t sure how The Market was going to end (which I always like), but I ended up being a bit disappointed in the conclusion. It petered out a bit at the end, without a clear resolution. Fortunately, the rest of the book was strong enough to carry the last ten pages.

It always warms my heart to find a book with a clever premise that stays interesting even after you’ve acclimated to that cleverness. This is one of those books. Don’t be expecting a life-altering read, but it’s definitely one I’ve found my mind flicking back to over the last four days.

if you liked this review of the market by J.M. Steele, you might also like these other posts: