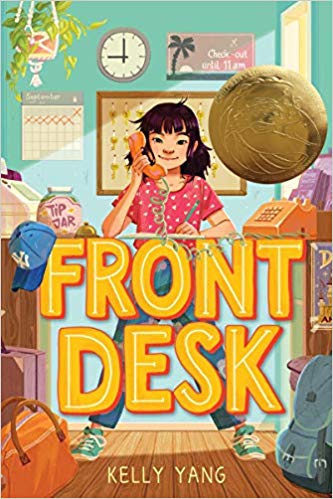 Several of the members had read it and were all RAVING about it.

Then in January it won the Asian/Pacific American Award for Literature, so when this book was recommended as a contender for Tell Me What to Read? It took me all of 5 seconds to give it one of the three spots.

And, whoa, Front Desk was just as good as I hoped.

Mia and her parents immigrated from China (it’s the early 90s) and life in the U.S. isn’t what they imagined when they left behind everything they knew in China.

Mia’s parents (including her engineer mother) have worked multiple low-paying, back-breaking jobs, but things seem to be looking up when they land a job managing the Calivista Motel in southern California.

Not only is the money reasonably good, but they get free rent living in the hotel. And Mia gets to run the front desk, even though she’s only ten (because it takes all of her parents’ time to clean the rooms). What could be better?

A lot, it turns out.

The owner, Mr. Yao, seems to have a heart made of stone and he’ll take any chance to dock her parents’ pay (the industrial washer breaks their first week? Their fault, naturally, so they’ll need to pay for it).

And if he finds out that they’re letting other immigrants stay a few nights for free in empty rooms?

Well, it won’t be pretty, let’s just say that.

And as if working an adult job isn’t enough, Mia is also trying to make friends at school and learn to be a great writer. Which is doubly hard when her mom is convinced she’ll never be a good writer since English isn’t her first language and she ought to just stick to math.

I thought Mia was such a strong character – she was smart and capable, but also acted like a ten-year-old most of the time.

And the supporting characters – her parents, the kids at her school, the immigrants who came to find temporary shelter in the hotel, the family they left behind in China – were all brimming with life and made the whole story feel rich and real.

Front Desk is also fairly heartbreaking. It’s so painful to watch her parents work themselves to the bone with no real hope of ever getting ahead and to see other families struggling to make it in a foreign country.

And attending elementary school isn’t a walk in the park either. She’s made fun of because her clothing is all secondhand and her desire to be a writer sometimes seems so impossible when English isn’t her first language and her mom is so certain she’ll fail.

It’s also funny and sweet and hopeful. I loved every page of it and I can’t wait to read it with my girls in another year or two.

Front Desk is also based on Kelly Yang’s own experiences growing up as a young Chinese immigrant in California, helping her parents run motels (she went on to attend college at THIRTEEN and graduated from UC Berkeley and then Harvard Law). The note at the end of the book about her own experiences and the experiences of other immigrants was the perfect

I finished this book on the airplane on my way to Mom 2.0 and when I met Gretchen Rubin and she asked what I was reading (a sure way to make sure I can’t stop talking for a solid 5 minutes), I raved about this book and told her that probably one of her three children’s lit book clubs should definitely read it.

And I’m going to say the same to you – you should DEFINITELY read it.

Previous Post: « My Favorite Parenting Books
Next Post: An Unpaid Review of Kiwi Crate (plus a promo code for your first box!) »