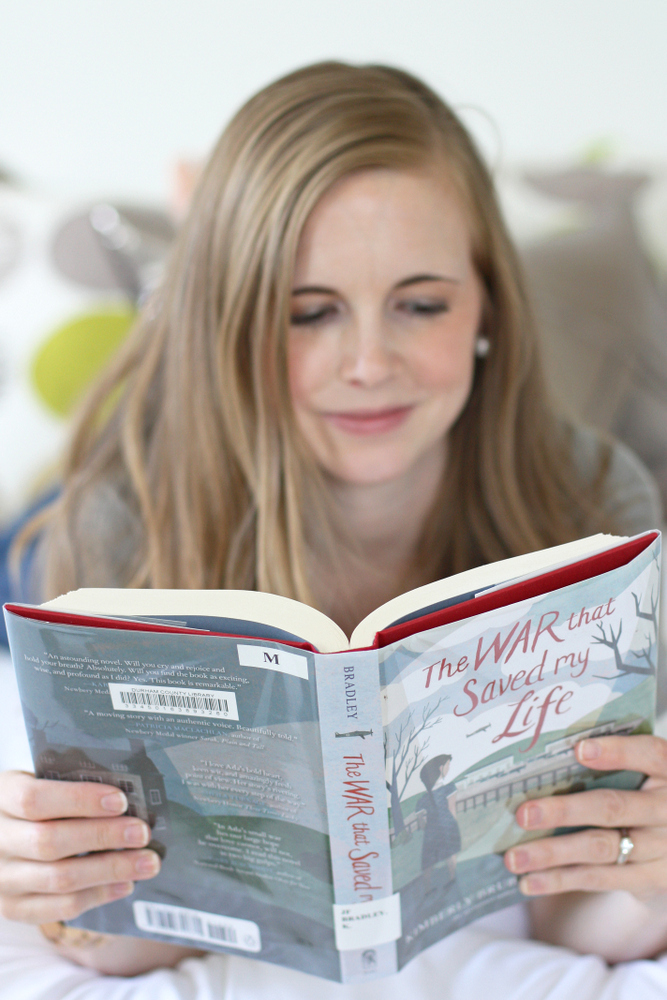 You guys, I’m already off to a much better start on this summer’s Tell Me What to Read books. I mean, last year, I never wrote reviews of even ONE of the books.

Happily, The War that Saved My Life set the bar high for the rest of the summer.

I already knew of Kimberly Brubaker Bradley from reading Jefferson’s Sons several years ago (which I highly highly recommend) and I’d heard such glowing reviews of this book, that I couldn’t wait to get my hands on it. It didn’t disappoint.

the war that saved my life by kimberly brubaker bradley

Ada and Jamie live with their mother in London. She works at a pub and is a pretty unfit mother. Ada, especially, takes the brunt of her mother’s cruelty because Ada has a mangled foot (she learns later that it’s a untreated club foot). Her mother is so embarrassed by it that she never allows nine-year-old Ada to leave the house, confining her to their one-room apartment at all times.

Jamie, on the other hand, who is a few years younger, runs wild, spending most of his time roaming the city with other boys. As the book opens, Ada, home alone all day and tired of her mother’s cruelty, begins secretly teaching herself to walk, which is incredibly painful since her foot is basically upside down.

And then, one day, he comes home from school to inform his mother and Ada that the children of London are being sent out to the country to protect them from Hitler’s imminent war.

Their mother agrees to let Jamie go, but insists that no one would want Ada with her “ugly foot.” But Ada refuses to be left behind and the next morning, she sneaks out with Jamie and the two of them board the train to the country. When they meet some of the neighborhood children, Ada realizes that most of the other children who have seen her at the window for years have always assumed she’s simple.

It quickly becomes obvious that, while Ada isn’t simple, her life experience is incredibly small. She asks Jamie what that green stuff outside the train is (it’s grass) and when they stop, she has to ask Jamie how to use a toilet since her mother has only ever let her use a chamber pot, too ashamed to let her use the public toilets in the apartment.

In the bathroom, as she sees herself in the mirror for the first time, she realizes how filthy and wan she and Jamie both are, and it is confirmed when they arrive in the country town and they are the only two children not selected by townspeople to be cared for.

The woman in charge puts the children in her car and drives them out to a house where Susan Smith lives alone. Her best friend has recently died, leaving the house to Susan, and Susan is in deep mourning. The two women argue and Susan finally reluctantly agrees to care for Jamie and Ada.

The children are certain that Susan is rich, since they have three full meals a day and Susan buys them new clothing. And when they hear she gets a small allowance to care for them, they suggest she take in more children, so she can be really wealthy (a suggestion that amuses Susan who knows that the money is a very small amount).

Ada also discovers that her club foot isn’t her fault and is surprised to realize that most people don’t seem particularly bothered by it – a few people remark on it, but no one seems to share her mother’s view that she should never be allowed to leave the house (a novelty that takes Jamie a while to adjust to).

And so Ada’s world grows bigger and bigger, as she learns to read, develops a few cautious friendships and, best of all, discovers horses. But she worries that this new life can’t continue. When the war is over, will she have to go back to her mother?

I was familiar with the children who were sent out of the cities during the London Blitz (there was an exhibit about it at the Imperial War Museum when I was on Study Abroad in London back in 2006), but I hadn’t read any books – fictional or otherwise – about what it might have really been like for them.

I loved the portrayal of Jamie, who was devastated early on to be out of London and sobbed daily to return home, despite how bleak his life was there. And Ada, who is afraid of being sent away, nevertheless struggles mightily to reconcile the way she views herself based on her mother’s behavior with the fairly regular girl Susan sees her as.

And watching Ada and Jamie learn new things is fascinating but not over-the-top (Susan quickly learns to explain everything from the absolute beginning – when she’s cooking eggs, she explains the shell, yolk, and white, and then how to crack it).

The War That Saved My Life was one of those books where I realized about half-way through that I had no idea how the story was going to unfold. There were a bunch of things going on – Ada’s growing understanding of the world and herself, the war and bombings, the looming fear of returning to her mother, her friendship with the wealthy neighbor girl – and they all worked together beautifully. There wasn’t an obvious story arc; despite the backdrop of the war, there was no timeline or foregone end point for this story.

And the writing is just so excellent here. You feel acutely Ada’s confusion, anger, and despair over her circumstances and her difficulty making sense of her life both in the present with Susan and in the past with her mother. It’s by turns heart-breaking (the scenes at Christmas when Ada can hardly contain her huge emotions are tear-jerkers) and hilarious. I kept making notes about great lines (but then I returned my copy to the library and packed everything up, so . . . I can’t tell you what those great lines were. Just rest assured there were many).

I didn’t think The War That Saved My Life was quite as good as Jefferson’s Sons, but it’s definitely a good addition to a WWII historical fiction collection. Also, there is a sequel in the works, but this is a book that stands solidly on its own.

f you liked this review of the war that saved my life, you might also like these books: