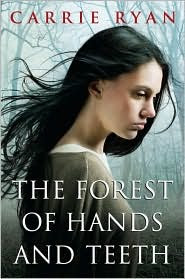 7 of 10: Gorgeously written, but fairly depressing. And zombies. I still don’t really know what to make of the book.

I wasn’t really prepared for this book. I had heard a lot of comparisons to The Hunger Games, with good reason – a strong female character, death galore, a post-apocalyptic world – but while I’ve assured dozens of people that, despite being about kids killing each other on television, it’s not that dark or depressing, The Forest of Hands and Teeth is quite depressing. And quite dark. Liking The Hunger Games is not an automatic guarantee that you’ll like The Forest of Hands and Teeth.

the forest of hands and teeth by carrie ryan

Mary has grown up in a small village surrounded by a fence. All around the fence are the Unconsecrated (code name for zombies), so you can’t go too near the fence of you’ll get bitten, become infected, and then you’ll have two choices: be killed or let yourself die and then return as a zombie (obviously, you get chucked outside the fence).

The Sisterhood is the religious group that oversees the village, insisting that this tiny set of people is all the remains of the human race since the Return (when people started coming back to life as Unconsecrated). The Return began generations ago – people in the village have no memory of life before it, nothing with which to compare the way they live.

Mary’s mother has told her stories about the ocean (apparently her great-great-great-grandmother visited it) and Mary dreams of seeing it – a place untouched by the Unconsecrated, a world without a fence around it. Somehow this dream has become the overwhelming goal of Mary’s life and she will be forced to see how much she is willing to sacrifice for this dream.

I haven’t read any zombie books before (because, ew, yuck), and I was simply not prepared for the fact that there would be so much death. Without spoiling it anymore, just be prepared for there to be an unbelievable amount of death.

This book has so so many themes going on (not in a heavy-handed way; it’s just a complex book), including religion, family and marriage, love versus commitment, and then various puzzles about the Sisterhood and a very fast zombie and the Guardians (the people who protect the village, killing Unconsecrated), but almost none of them are resolved. It didn’t feel like it was lazy, it just felt unfinished, which, while frustrating, also felt like it matched the tone of the storyline and the world that had no easy answers. There’s a sequel coming out next year (well, sequel of sorts) and I’m curious to see what answers it will present. Because I am burning with questions.

The Forest of Hands and Teeth reminded me vaguely of the The Giver (what with a very different world that no one remembers life before) and Graceling (with a main girl torn between love and dreams).

My initial reaction upon finishing the book was despair, but a day later, I’m still thinking about it, about the characters, and the themes, and that warms my opinion of it considerably. I think for me the problem was that my expectations were so far off from what the book really was about. It keeps getting billed as a romance and, I don’t know, I just couldn’t call it that.

There is no denying that this is a beautifully written book. For a first time author, this is just astounding.

Am I the only one torn on The Forest of Hands and Teeth?

If you liked this review of the forest of hands and teeth, you might also like these books: