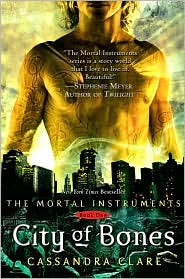 8 of 10: City of Bones is all that I can ask for in a fantasy book – action, romance, top-notch characters, and plenty of twists. If you’re a YA fantasy fan or a Harry Potter lover, it is a good bet you will like this book.

I somehow completely missed the boat on The Mortal Instruments series. The third one came out about two weeks ago and they’ve all been on the NYTimes best-seller; yet, I was hardly aware of them until two weeks ago when Kayla said, “YOU MUST READ THESE BOOKS.” And because she has kindly read every book I’ve forced on her, I figured I could return the favor. Once she told me about them, I started seeing them or hearing about them everywhere. Of course.

There were so many things that made me think I wouldn’t like this book: lots of made up terms, vampires, werewolves, and fairies. The covers also didn’t really appeal to me – they looked so dark and weird that I never really gave them a second look.

And yet, as you could probably guess, I loved City of Bones. Like, kept having to shut off the CDs to text Kayla and say, “I will give you my first born child for telling me about this book.”

city of bones by cassandra clare

Clary is a fifteen-year-old girl living in NYC with her mother (Jocelyn); one night, while at a dance club with her best friend Simon, she sees three teenagers lure a fourth teen into a utility closet and then kill him. Except the teen’s body disappears. And when Simon, sent by Clary to get a security guard, shows back up, neither he or the guard can see the other three teenagers, even though Clary can see them perfectly.

And then, the next night Jocelyn disappears after a frantic phone call in which she warns Clary to not come back to the house but to get away as quickly as she can.

Suddenly her ordinary life becomes very unordinary when she discovers that her mom used to be a shadowhunter (a person who hunts demons), before she turned her back on a powerful and evil group of shadowhunters that were trying to exterminate all demons, no matter the cost to humans or downworlders (vampires, werewolves, etc). And as if the news of all this power and intrigue isn’t enough, Clary finds herself making tentative friends with the far-too good looking Jace (and Jace knows just how good looking he is. He also knows that he’s one of the best shadowhunters his age, so he’s got enough ego for the both of them).

There are a lot of things going on in this story, with many plot lines and characters appearing and then intersecting in interesting ways.

It reminded me a lot of Harry Potter (the sudden discovery of a world you never knew about going on all around you, werewolves, flying motorcycles, bad guy obsessed with pure bloodlines, etc), but there was more romance and more snark.

I particularly loved Jace because of his snarkiness. You know I’m always most attached to the character with the snappy and sarcastic lines (see House, Sawyer, Jacob Black, etc., etc.,). Jace has some lines so hilarious, I was laughing out loud in the car and rewinding to listen to them again.

And, of course, there’s a terrific love-triangle, another plot device I will probably never ever grow tired of. It comes as a surprise only to Clary that Simon has been secretly in love with her for years (Jace picks up on it approximately ten seconds after meeting Simon).

I guess if I was to make one negative comment about City of Bones, it’s the heavy handed foreshadowing (like the revelation half way through the book that Simon likes her – as if it wasn’t SO so obvious from page 1) or the secrets about Clary’s family.

The best part is that I have the next two books of The Mortal Instruments series here waiting for me, courtesy of the Notable Books project. City of Ashes, here I come!