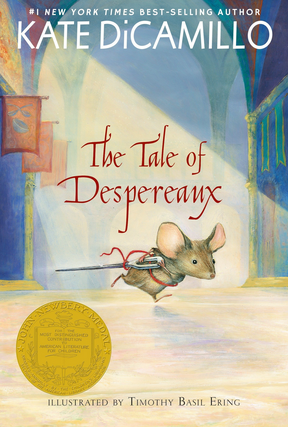 I’ve been working my way very slowly through a fabulous book called “First Families but at the rate I’m reading, it will likely be another week or two at the least before I finish it, and I was feeling antsy to read and complete something. The Tale of Despereaux fit the bill perfectly. It’s another Newbery book – the 2004 winner – and since it is a children’s book, it’s almost guaranteed to be a one-day read.

The Tale of Despereaux by Kate dicamillo

The copy of The Tale of Despereaux that I borrowed from my library is a hard back with very thick pages that are raggedly cut on the outer edge and make me feel like I’m reading a very old and classic book, rather than a very new children’s book. If that wasn’t enough to make me want to read the book, anything with the words “some soup” in the title is more than ample reason. And, I have to admit, for some reason, any book with a mouse as a main character reminds me of one of my favorite childhood books: The Mouse and the Motorcycle by Beverley Cleary. The Tale of Despereaux, of course, has no motorcycle, seeing as it’s set in a castle. Nevertheless, the cover photo was so charming, that, even motorcycle-less, the book seemed worth reading.

The book begins with the birth of Despereaux mouse, the only mouse in his litter who lives. He has massive ears and is born with his eyes open (which just isn’t done, whisper the other mice). His French mother determines that he will be the last baby she has, since it’s “hard on my beauty.” From the outset, Despereaux is an odd mouse; first off, he’s absolutely minuscule. No one has ever seen such a tiny mouse. Additionally, he’s not very interested in searching for crumbs, and, when his older sister shows him a book, instructing him to eat the glue first and the the “squiggles,” he reads the book instead, much to the dismay of his family. The book is a fairy tale about a knight in shining armor and his beautiful princess. Finally, Despereaux mouse can hear music, which none of the other mice can recognize. This love for music leads him to the Princess Pea’s bedroom one night where the King is playing his guitar for her. He speaks to the Princess and lets her pet him, which, when this is seen by Despereaux’s brother, leads to his banishment to the dungeon where he will be, presumably, eaten by the rats.

The story then switches tracks, giving the background on a rat named Roscuro who is fascinated by the light – an oddity among rats who hate the light and feel that the meaning of life is suffering. He sneaks upstairs into the banquet hall and is captivated by the chandelier, the food, the people, and the light. Tragedy ensues, however, and it is here that “some soup” comes into play.

Then, story line number three introduces Miggery Sow, a little girl who has been sold by her father for a hen, who dreams of being a princess despite the fact that she is lazy, homely, and dense.

All these stories connect as each tries to gain what they most desire. The set up is fun to watch and the interaction between the various characters is both touching and amusing. Unfortunately, I felt like the climax was a bit weak and rushed. With such a deliberate and careful set up, it was slightly upsetting to see the whole thing suddenly lumped together and then concluded, in my mind, rather clumsily. Still, few books can get everything right, and the enjoyment of the rest of The Tale of Despereaux greatly offsets any disappointment found in the last twenty pages.

The writing style reminded me slightly of Lemony Snickett, with the habit of addressing the reader directly (and some amusing definitions of various words) and that instantly endeared me to the writer, since the Lemony Snickett series entertain me to no end. Some of the lines appealed to me no end, particularly this one: “Reader, you must know that an interesting fate (sometimes involving rats, sometimes not) awaits almost everyone, mouse or man, who does not conform.”

Also, after reading The Tale of Despereaux book and now writing about it, I’m very much in the mood for some soup.