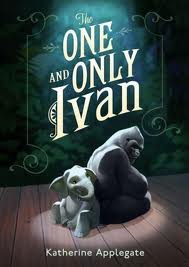 One of the things about growing up, I think, is that you get a pretty strong sense of what books you’ll like and which ones you won’t.

I know, for example, that I’m likely to enjoy most historical fiction set during the last two centuries, YA romances, everything by Sophie Kinsella, and anything that has to do with time travel. I also cannot say no to food-related non-fiction or pop psychology.

On the other hand, I shy away from fantasy that heavily features made-up worlds/animals/language, non-fiction with very tiny text, and . . .

So, you can imagine that I was a bit wary of The One and Only Ivan when it won the Newbery. Seriously? A book from the point of view of a gorilla?

But then it was on the shelf at the library and I am trying (very very slowly) to read through all the Newbery titles, so I picked it up.

You guys. The One and Only Ivan is so so good. I started it two weeks ago just before bed and then blazed through the rest of it while Ani snoozed in my arms at the library in Dallas.

This is the perfect combination of beautifully written and just absolutely gripping. Here is a book I would recommend without hesitation to older elementary school students, parents, fellow readers. . .just about anyone. Sometimes the Newbery committee really lets me down (am I taking it too personally? Maybe so), but they delivered this year.

the one and only ivan by katherine applegate

Ivan, a silverback gorilla, lives in a cage (he prefers the term “domain”) at the Exit 8 Big Top Mall and Video Arcade. Twice a day, he and the elderly elephant, Stella, along with a few other animals, put on a little circus show.

Ivan doesn’t mind his life – in fact, he pretty much never thinks about his life before he arrived here. He has a little TV, and his friendship with Stella, and he likes to draw (the owner of the mall sells his crayon drawings for $20 a pop). Things aren’t so bad.

But then, Ruby, a baby elephant, arrives and she does remember her past, including what it was like in the wild. And Ivan starts to remember his own past, first in the jungles of Africa, and then later, living in the home of a young couple.

And Stella is desperate for Ruby to not spend her entire life in a run-down wannabe circus mall. She wants Ivan to help, but what can a gorilla do?

Ivan has such a fantastic voice – he’s by turns light-hearted and depressed. Sometimes he has grand dreams and sometimes he’s resigned to his life in his domain, flicking dungballs at people who stop to gawk at him in the cage.

The One and Only Ivan is every inch a Newbery winner. Even if you aren’t an animal book person either, give it a chance. I think you’ll love it.

One of the things that delighted me about this book is that it’s inspired by a true story – there really was a gorilla named Ivan kept in a tiny cage in a shopping mall in Washington state for 30 years. After some public outcry, he was transferred to the Atlanta Zoo. And he really does paint, even signing his art with a thumbprint.

(Also, if you want to love Katherine Applegate even more, check out this very brief interview with her and her husband, Michael Grant (he is the author of the Gone series and they co-authored the mega-popular Animorphs series back when I was a kid), where they ask Michael what he’d change about Katherine. His response,

What would I change about Katherine? Seriously, you expect me to suggest
my wife might have a physical flaw? I know you’re newly married, Roger,
but take some advice: don’t ever admit to a flaw in the spouse. You’ll
never hear the end of it. No, no, no, I’m an experienced husband; I’m
not falling for that.)

If you liked this review of the one and only ivan, you might also like these books: