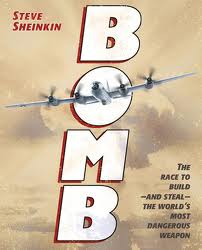 Long ago I gave up giving books rankings because it was making me so insane, but if I WERE to give Bomb a numerical rating, it would absolutely be a ten. This book was so ridiculously, unbelievably good.

Remember how it won three different awards from the ALA when it came out? It deserved them all and more. (It also was the Cybils winner in the non-fiction category).

It is very likely that this is the best non-fiction for children/young adults that I have ever read. It is astonishingly good.

There are three story lines going on here. One is in America, with the US government trying to build the atomic bomb, once Einstein convinced FDR that the other countries involved in WWII were certainly trying to build one as well. They round up the best scientists in the country, open secret military towns in different locations to start working on it, and try to keep it as secret as humanly possible.

You’ve also got the Germans trying to build a bomb (it was a German scientist who discovered fission and as the realization of what it could mean in terms of warfare really settled on him, he seriously contemplated suicide. He was so horrified by what he’d introduced into the world), while their enemies, particularly the British and Americans, try like mad to keep them from making progress on it. It’s pretty clear to most of the world that if Hitler gets his hands on an atomic weapon, he will have no qualms about using it.

And then you have the Soviets, who are technically America’s allies but not even remotely close to being friends, who are determined to figure out everything America knows about atomic weapons and steal the information so they can build their own. There is a lot about their spy network and the Americans (and British) people who hand over the info they need. It’s a little mind-blowing to see some of these people decide that, hey, they’ll be happy to pass over national secrets to another country (it’s also amazing to me how bold these people are. I’m afraid of keeping a secret about five dollars, let alone coolly handing over ten pages of diagrams about how to assemble the most powerful bomb in the world (and then strolling through an FBI search with it torn up in the bottom of my box of Kleenex).

I think a lot of non-fiction for kids and teens is a little dry because the authors mainly stick to the overarching story, while I find that it’s the details that make history so interesting. Sheinkin does an unbelievable job of putting in fascinating details that really flesh out the characters and timeline without bloating the book (it’s about 200 pages long).

I loved the story about J. Robert Oppenheimer (the director of the Manhattan Project) being so absent-minded and obsessed with physics that, during a date, he left the girl in the car while he took a “quick” walk and then got so absorbed thinking about physics that he walked all the way home and went to bed. (His date called the cops when she woke up in the car hours later and discovered he still hadn’t returned. She was sure something horrible had happened to him).

There was also a great incident with Truman, who was serving as a senator, where he noticed tons and tons of money being put into unnamed projects. Worried that the taxpayers’ money was being wasted, he tried to investigate (FDR just funneled the money to the Manhattan Project without letting Congress know what it was being used for) and got shut down almost immediately by the Secretary of War. What irony that the senator who wasn’t considered important enough to know that an atom bomb was even being worked on would be the one to make the final decision about when and where to use it a few years later.

It does a great job of making these people all so very very real. And even though there are tons of characters, I really was impressed by how easily I could keep most of them straight. Sheinkin just does a magnificent job making them all very distinct. I especially felt for Oppenheimer who, despite his delight that the bomb actually does work after so much pressure from the government to make it happen, feels all too sharply what his success means. And when he tries to convince Truman not to escalate the arms race by making more and bigger atomic weapons and Truman promptly shuts him down, telling him to, in effect, get over it, I just wanted to weep for him.

Bomb by Steve Sheinkin does a good job tying together the ends of the story. The book ends, not with the dropping of the bomb, but with the details about what happened to many of the major characters – Truman and his determination to keep building weapons (and then his shock when the Soviets so quickly get weapons of their own – the Americans had no idea the Soviets had gotten so much intel about how to develop the bombs), Oppenheimer’s despair when a politician with an agenda gets him stripped of his credentials and accuses him of being a Communist and probably a traitor, Ted Hall, who gave the Soviets extremely detailed info about the bomb, but never was caught because the FBI didn’t want to expose their evidence in court and he wouldn’t admit to doing anything, despite their best efforts to intimidate him into confessing.

One of the things that impressed me so much about Bomb is that it really gave made me feel the horror of nuclear weapons without relying on the devastation it caused (it did mention, of course, the enormous number of lives lost in Japan both immediately after the bomb was dropped and in the days, weeks, and years after, and how the whole world could be made uninhabitable by just a few of the bombs being used, but this was very brief). Instead, it was how seriously the scientists took this, how deeply they felt the weight of what they were doing, and how determined each country was to get a hold of the technology that sobered me. When you can impress on a reader the weightiness of a topic without scare tactics or just mind-boggling statistics? That’s good writing right there.

This reads like a thriller – even when you know how things are going to end up, I couldn’t stop turning the pages.

It’s amazing how much effort, money and manpower went into developing the bomb and how MANY things had to go exactly right for it all to succeed. As one of the spies says in the beginning when he’s caught by the FBI, “This is a big story.” It is a big story, and to tell it so clearly, so interestingly, and so succinctly is quite the feat.

This would be a great book to read alongside The Green Glass Sea (a historical fiction book about a girl who lives in Los Alamos with her scientist father while he works on the bomb).