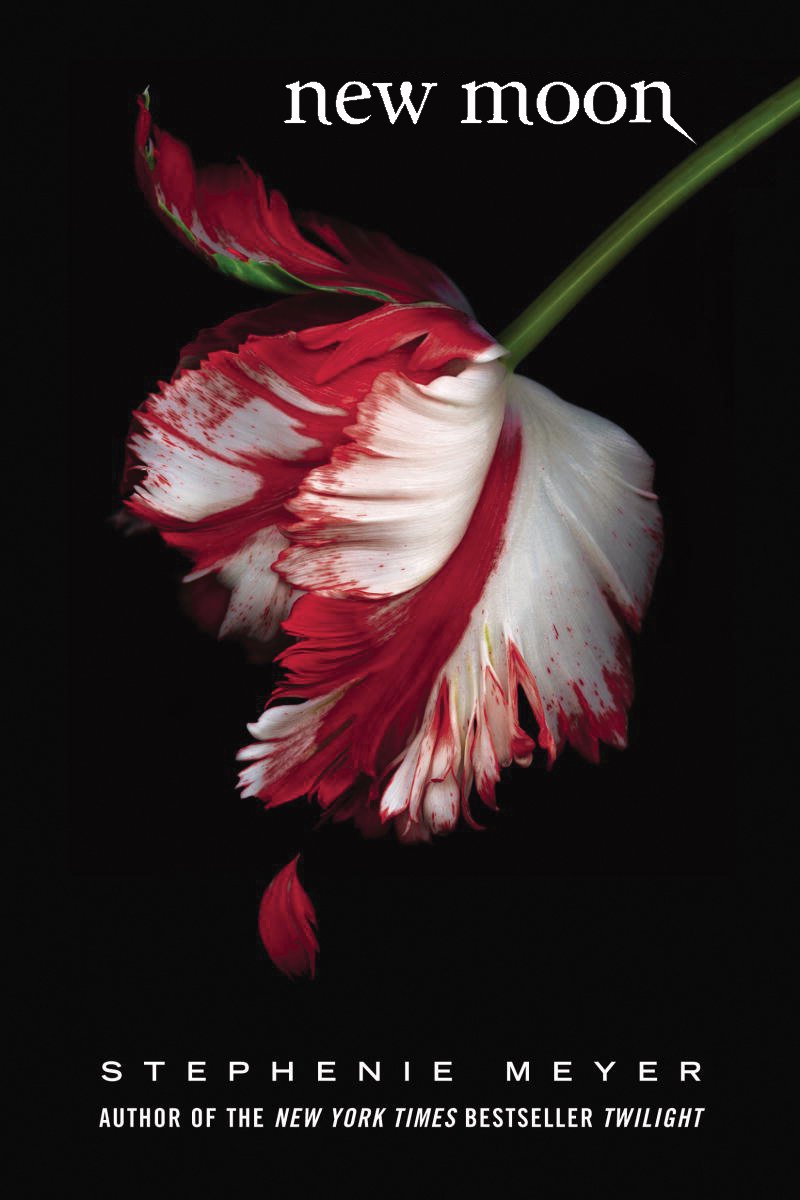 My mom read my post about Twilight and I told her in person that she had to read the books. Last night, she called me to tell me she planned to make a trip to Barnes and Noble to pick them up. This morning, I got a call from her and the first words out of her lips were “You’ve ruined my whole weekend! I have so much to do, and I’ve done NONE of it!” Bwhahaha! Behold the power of Stephenie Meyer.

I got the second book, New Moon, a day before we left to Disneyland, and I forced myself not to read more than a few pages because I knew there was a three hour flight looming and I wanted to save the reading for a cramped airplane seat.

I’ll say right off the bat that I didn’t enjoy New Moon quiiiiiite as much as I did Twilight, although it was still excellent. The other thing that has to be said is: DANG it’s hard to write about a book when basically anything you say will ruin the first book. With those two items out of the way, New Moon is a great book. It picks up about four months after Twilight ended, in the fall of Bella’s senior year, the day before her eighteenth birthday. She is not looking forward to her birthday at all, seeing as it marks officially her becoming older than Edward. Edward and his family, on the other hand, are tremendously excited at the prospects of celebrating her birthday and invite her over for presents, cake, and other festivities. Then, while unwrapping a gift, Bella papercuts her finger – hardly a noteworthy event in normal circumstances – and suddenly all present are reminded just how dangerous the relationship between vampires and humans can be. Edward, stubborn as ever, decides that the only solution is to leave (this is all in the synopsis and also happens in the first fifty pages, so I feel fine about spoiling this), which he does, after telling Bella she’ll never see him again and it will be as if he never existed.

Bella is devastated, spending months going through the motions of her life to keep her dad off her back, but unable to find meaning in the monotony of her life. Fortunately, she and Jacob Black (the boy she met on the beach the year before who told her about the legends of the vampires and werewolves) rekindle their friendship when Bella asks him to help her rebuild two motorcycles she obtained for free (she promised Edward that she wouldn’t do anything reckless after he departed and Bella decides she’ll feel better if she breaks that promise). Jacob is obviously interested in her, but Bella cannot imagine ever having feelings for anyone but Edward. Still, she feels happier and more alive around Jacob than she has since the Cullens departed. Then, out of nowhere, Jacob turns moody, sullen, and standoffish. Unwilling to let another important male slip from her life, Bella pursues him until she discovers the truth about what’s distressing Jacob. The answers she finds are as surprising and unbelievable as those she found last year when she learned Edward’s secret.

Really, the only reason I liked Twilight better was because it has so much more of Edward in it. In New Moon, Edward is absent for the vast majority of the book, and, let’s be honest, I REALLY liked that vampire. Still, the plot line for New Moon was very interesting and the characters were as deeply rich and compelling as they were in Twilight.

Unlike Twilight, which ended cleanly and could have stood alone, New Moon clearly sets the reader up for another book (which should be coming out in August or September). I like it that the questions Bella faces at the end are not easily answered and that I have absolutely no clue how they will be resolved in the next addition.

One of the things I really love about these two books is that they are loooong. Sometimes you get really into a book, and it’s over 150 pages later. I’m glad that both Twilight and New Moon have a full 500+ pages to enjoy. Even then, of course, it isn’t enough, and I’ll be first in line come fall to buy the third book, Eclipse.

Previous Post: « Twilight by Stephenie Meyer
Next Post: The Tale of Despereaux: Being the story of a mouse, a princess, some soup, and a spool of thread by Kate DiCamillo »