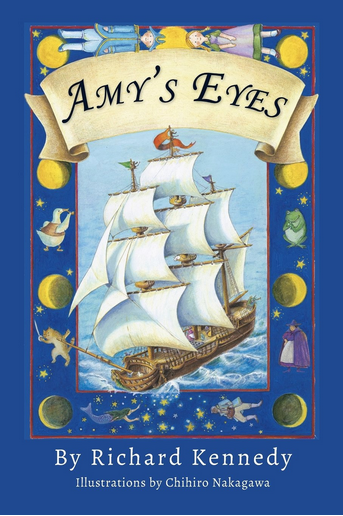 4 of 10: Amy’s Eyes was just too weird for me. I can do talking animals and dolls that come to life, but this one was just so bizarre I just couldn’t enjoy it.

It really pains me when I don’t enjoy a book that someone recommends for Tell Me What to Read, because generally when someone is recommending a book in that forum, it’s one of their favorites. And then for me to not care for it? It feels so personal (it’s not, I swear).

I have to admit that my tolerance for bizarreness in a book isn’t particularly high and this one was way past my level of comfort.

Amy’s Eyes begins with Amy being left as a newborn at a school for girls by her father is who going off to sea to make his fortune. He leaves her in a little breadbasket and along with her a small Captain doll that he’s made. As Amy grows up, she LOVES this doll and talks to it constantly. And then one day she accidentally stabs him in the head with a needle and he comes to life. And then when the evil schoolteacher finds out, she runs him out and Amy is so despondent that she turns into a doll and the kind schoolteacher hides her in a breadbox hoping that one day the Captain will return for her.

And this is the normal part of the book.

The captain does return for her and takes her away on his new ship (he’s been willed it by the captain he served under when he first went off to sea). Of course, there are all these rumors about him being a former doll, so he can’t get a crew, so he gets a bunch of stuffed and rubber animals, reads to them, stabs them in the head with a pin and makes these now-alive animals his crew.

And now they’re setting out to find this pirate treasure that they have a kind-of map for. And the former captain’s sister claims that the ship AND the map belong to her and she comes along, but she might be evil? No one can quite tell.

It will be hard for me to find a weirder book to read before the end of the year, is what I’m telling you.

Also this book is EXTREMELY long. There’s all this talk about how bloated children and YA books have become in recent years, but Amy’s Eyes, which is decades old, clocks in at a cool 448 pages. This is a lot of pages to read about rubber ducks with mutiny on their mind coming to life. And men made from long underwear and ALSO brought to life who are extremely religious and also extremely paranoid.

I’ve read other books about dolls that go off on adventures, like Hitty Her First Hundred Years and The Miraculous Journey of Edward Tulane, and enjoyed them far more.

Also an unused paperback copy of this book on Amazon is listed at a mind-blowing $136. I just needed to share that.