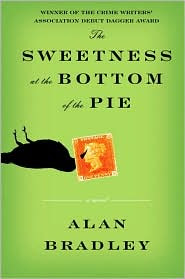 8 of 10: It took me a while to warm up to The Sweetness at the Bottom of the Pie, especially with the audio version, but I ended up really enjoying this murder mystery with its incredibly precocious narrator.

I started listening to The Sweetness at the Bottom of the Pie on my iPod and I could not really keep track of all the characters or, frankly, even what was going on. I caught that. . . someone was murdered. But that was about it. I finally had to check out a physical copy of the book and reread the first 50 pages so I could follow the story line. I am not all that bright, people.

After that, it really picked up for me and I thoroughly enjoyed the story.

The Sweetness at the Bottom of the Pie by Alan Bradley

Flavia is the narrator, an eleven-year-old chemist, who mainly uses her scientific knowledge to get revenge on her two older and somewhat-unkind sisters. Her mother died years earlier and her father is a bit disengaged, so the girls are mainly on their own, a fact which doesn’t seem to bother Flavia much. She’s happy to tinker around in her make-shift lab and explore the surrounding areas on her own.

Life is fairly average until the morning she opens the kitchen door to find a dead jacksnipe (a large bird) on the doorstep with a regular British postage stamp stuck through it’s beak. As if that weren’t odd enough, her father seems to be completely thrown by the appearance of this bird, far more than seems normal.

Then, when she gets up in the middle of the night to investigate some odd sounds, she hears some strange man threatening her father. She only is able to eavesdrop on part of the conversation before her father’s hired hand whisks her back off to her own room, but the next morning, when she’s in the garden, she discovers a dying man, who whispers one last strange word before he stops breathing.

Flavia is more startled than horrified and she is certain the dead man is the one she overheard talking with her father the night before. Is her father the murderer? And how did this guy die anyway? The police give her the brush-off, of course, but she’s determined to find out the details on her own.

The storyline really took me by surprise – it was much more intricate and unexpected than I’d anticipated and by the end, I was just thoroughly enjoying watching it all unfold (as I’ve probably mentioned before, I am a terrible guesser, so everything surprises me).

Flavia is by turns hilariously lovable and infuriating. Much like an actual eleven-year-old girl, in fact. In the end, though, I think you’d be hard pressed not to really like her and root for her to connect all the dots before she gets herself killed.

Will I read the other books in this Flavia de Luce series? I’m not sure – sometimes it’s just best to let a book stand alone. On the other hand, I don’t know how long I can stay away from Flavia. She really did eventually win me over in a major way.

If you liked this review of The Sweetness at the Bottom of the Pie, you might also like these books:

Previous Post: « 24 (The Version Where You See a Baby and Jack Bauer Doesn’t Kill Anyone)
Next Post: 31 Weeks »