On Saturday morning, Bart and I got on a plane and flew to Utah.

It was a bit of a whirl-wind trip (so much so that we checked in for our return flight immediately upon arriving at the airport in Salt Lake), but absolutely worth it.

We picked up our rental car (many thanks to Priceline for making it super super cheap) and began our 24 hour blitz of family, starting with Bart’s dad and stepmom, then on to a Mother’s Day/Family birthday/Baby shower party (so many cute gifts – I could have died. Instead I stuffed them in my suitcase and brought them home so I can continuely snuggle the little outfits), before heading over to Merrick‘s house to see the main reason for our trip: 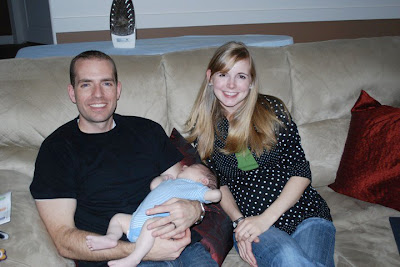 His Royal Highness, the first grandbaby.

After spending some 6 hours with Merrick and Philip, I kind of wonder if they ever get to hold their own baby.

We spent the night at Bart’s parents house and at the last minute offered up the extra beds to my parents and Crawford so they could avoid an extra couple of hours of driving (this is not the first time my in-laws have acted more than happy to let us invite people to their house with little or no notice. They are good folks). We stayed up way too late laughing and talking.

And then it was back up in the morning for a breakfast at Merrick and Philip’s place (I . . .  ate a lot), before heading to church where the baby was blessed and after which Bart and I sped back to Salt Lake to catch our flight home, took the bus, the T, and a shuttle home, and collapsed in bed a little after midnight.

Since we don’t drink, we’ve had to turn to jet lag to give us a Monday morning hangover. Happily, though, all the events of the weekend are clear and crisp in my mind. And I’d do it all again in a heartbeat.

Previous Post: « 10 More to Go
Next Post: The Sweetness at the Bottom of the Pie by Alan Bradley »