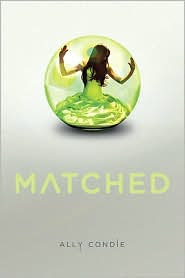 9 of 10: This dystopian novel was just begging me to like it. The Giver plus romance? Sign me up. Matched turned out to be even better than I’d expected.

I joined The Giver party late – I didn’t read it until I was nineteen. I had no idea what to expect from it (I’m sorry, people, but it really does have a ludicrously terrible cover, I’m afraid). But when I finally did read it, I loved it. It was one of the first dystopian books I’d read, and I fell in love with the genre mainly because of this book.

So when I received an advance copy of Matched by Ally Condie and the letter that went along with it said it was similar to The Giver, but aimed at young adults and had a romantic story line, well, you know I was sold. I read it within a week of it arriving.

Cassia is nervous, of course (my personal idea of purgatory, actually, might be seeing the face of the person I was supposed to marry in front of my friends and all my family for the first time. Ugh), but she’s excited too.

And then, she ends up being completely shocked when the person she is matched with is one of her closest friends, Xander. They’ve known each other all their lives and he’s handsome and funny and smart and nice. She is thrilled. (Also, being matched with someone that you know is extremely rare, so it’s kind of a big deal).

Each person is given a silver box with a microcard that contains information about their match and Cassia gets one too, even though she knows Xander personally and doesn’t need to know how many siblings he has, what his favorite color is, or when his birthday falls on the calendar. Still, she is curious about what kind of information might be on there, and so the next day, when she is home alone, she plugs the card into the computer to read up on him.

Except the face that appears on the screen is not Xander. It’s another boy, named Ky.

And she knows him too. He was adopted by the Markham family (who live just down the street) years earlier when the Markham’s son was murdered in a rare occurrence of crime in the Society. Ky, who is the Markham’s nephew and lived in the Outer Provinces (read “Hicksville”), had lost his parents and so was sent to the Markhams to be raised as their son.

Ky was a nice kid although somewhat quiet and he has already left school and been placed in his occupation, which is food disposal, a very low-end job, which came as a surprise to everyone since he seemed bright enough.

Cassia is a little ill over the whole thing because it’s so strange. Why did a different person show up on her microcard? Who was she supposed to be matched with? When an official pulls her aside during free time the next day to assure her it was a mistake and they’re trying to find out who placed Ky’s information on her card, Cassia is relieved that she’s still matched with Xander and she can move forward with her life.

Except now she’s curious about Ky. Especially after the Official dropped a few clues about Ky’s rather mysterious past. It’s like when someone tells you that so and so likes you – you suddenly notice them a lot more.

And there are other things going on – the increased scrutiny by the Officials, her grandfather’s secretive gift to her of Dylan Thomas’ “Do Not Go Gentle Into That Good Night” poem (a poem which she’s never heard, since the Society chose 100 poems to keep and destroyed the rest), her mother’s increasing travel for work – that cause Cassia some unease. Is this because she’s, for the first time, breaking a few rules or is something bigger going on? She doesn’t know.

I’ll admit, at first I thought, “Eek, is this too much like The Giver? Is it just a knock off?” And yes, there are many similarities – the arranged marriages, the assigned jobs, the pills – but it is very much its own story and goes its own direction, which thrilled me to no end.

One of my own personal standards for quality of a book is how I tell Bart about it; if I suddenly find myself spending thirty minutes telling him all the details of the book, getting excited all over again about the characters and the setting and the plot, I know it’s a winner. Matched was one of those – after telling him about it, I was all anxious to go read it again (Bart refuses to read it because Matched is the first of a trilogy and he does not like to read a book where he has to wait years for it to be concluded).

Matched by Ally Condie was . . . really good, one I see myself passing around to friends and recommending when someone needs a book title. I’ve read a tremendous amount of lousy books this year – so many of the new YA titles have been very disappointing – but even in a good year, this book would have been a standout.

And now I’m desperately waiting for the next installment of this Matched book series. Maybe Bart’s method is better after all.