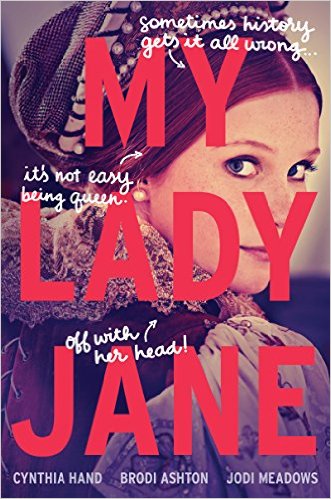 For me, there’s nothing better than reading a book that I can recommend far and wide.

My Lady Jane is one of those books. (Big thanks to everyone who suggested it on this summer’s edition of Tell Me What to Read).

It had so many rave reviews, especially for the My Lady Jane audio version, that I downloaded it almost immediately and started listening on my morning run.

I’d only passed about two house before I had to pause and confirm that the narrator was Katherine Kellgren.

Back when I was commuting to and from my elementary school libraries in Boston, I drove about 30 minutes each way and I spent much of the second half of the year listening to the Bloody Jack series, which she narrated. And she is just THE best narrator ever (just as good as Jim Dale, who reads the Harry Potter series, in my opinion).

And she was the PERFECT pick for this book.

I knew immediately I was going to love every second.

The story is based on Lady Jane Grey, which, if you know anything about her, is not exactly a promising setting for a hilarious, side-splitting story.

(Since my British history was getting rusty, I looked up a quick synopsis on Wikipedia before I started – to save you the arduous task of Googling it yourself, the basic things you need to know are that Lady Jane Grey was cousin to King Edward VI, who was the son of Henry the Eighth and Jane Seymour, and that when Edward died, Lady Jane Grey was made queen and lasted an entire nine days before she was accused of treason and Mary (Bloody Mary) was named queen. After sitting around in prison for a bit and after a trial, she and her husband were executed).

The beginning of the book starts out fairly close to the actual  truth – Edward gets sick, Jane gets married, Jane is named queen after Edward’s death, etc. Then the authors break the fourth wall and let you know that the time for following the historical record is over and now it’s time to just make stuff up. And it’s hysterical.

There’s also the added bonus storyline that in England some people can change into animals (King Henry the VIII turned into a lion when he was angry and sometimes ate his subjects if they crossed him). Some people in the kingdom find this very distressing and possibly completely evil, so they’re trying to eradicate these people. You can guess that this is going to be a major part of the storyline.

There’s just one hilarious line after another – when the dedication at the beginning of the book reads, “For everyone who knows there was enough room for Leonardo DiCaprio on that door. And for England. We’re really sorry for what we’re about to do to your history” you know you’re in for a good ride.

And Jane is the best heroine – smart, gutsy, and committed to her ideals, plus a major reader. Obviously I loved her.

And the romances (there are two major ones) are just completely delightful and fun, without getting graphic.

Also, this book is labeled as a YA book, but there was nothing about it that made me think particularly YA, except maybe that Jane and Edward are teenagers.

I mentioned My Lady Jane on Instagram and on my Insta Stories and had multiple respond within a week saying they’d listened to it after I talked about it and LOVED it. It’s just such a crowd-pleaser.

There are two more books coming out in the Lady Janies Series – the next one, My Plain Jane, is scheduled to be published next year, about Jane Eyre and Charlotte Bronte, and then My Calamity Jane is slated for 2020 (otherwise known as WAY too far away).

You know I’ll be first in line to listen to them.