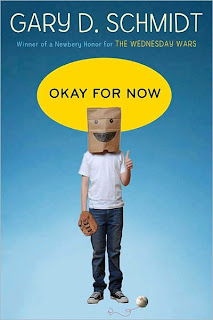 I don’t have words to praise Okay for Now highly enough – I have had to curb myself considerably to keep from quoting nearly the entire book in this review. I worried that there was no way it could live up to The Wednesday Wars, which is perhaps my favorite book of all time, but it was just as wonderful.

Doug Swietek appears in The Wednesday Wars, but he’s notable mostly for his list of  “401 ways to make a teacher hate you” and his older brother, known only as “Doug Swietek’s brother”  who is, himself, a notorious trouble maker and always out to get someone (often Holling).

okay for now by gary schmidt

Now, Doug gets an entire book to himself. As it opens, his family is moving away to Marysville where his dad has gotten a new job (no one dares to ask about why he’s lost the old job, but Doug’s descriptions of the family make it clear that Doug and his older brother didn’t inherit their trouble-making ways from nowhere). The new house is a complete dump and Doug has to share a room with his older brother who has “quick hands” (both the stealing and hitting kind).

The first day there, Doug finds himself in the library, where, in an empty upstairs room, is a book under glass, open to a picture of a bird drawn by John James Audubon. The picture completely arrests Doug; his interest is noted by Mr. Powell, an older librarian, who takes it upon himself to break down Doug’s walls a little and teach him how to draw.

These informal art lessons are a bright spot in Doug’s fairly dark life. He’s keeping secrets about his family, which you discover quickly when he describes his older brother (who, like Holling’s sister in The Wednesday Wars, remains unnamed for a very long time) stealing his Joe Pepitone hat and “pummeled me in places where the bruises wouldn’t show. A strategy that my . . . is none of your business.” And he has a job delivering groceries on Saturday mornings but his customers are extremely wary of him after a break-in that most of the town believes was done by his older brother. You can imagine why the quiet of the library and the patient teaching of Mr. Powell have such appeal to Doug, even if he wants to pretend they don’t.

In the same way that the works of Shakespeare acted as a narrative guide in The Wednesday Wars, John James Audubon’s art is the continuous thread in this book. If you’d told me that beforehand, I would have been wary, since I’m not particularly artistically inclined, but it worked marvelously.

In The Wednesday Wars, Holling describes the lesson where Mrs. Baker is teaching about diagramming sentences and the sentence Doug gets is “I read a book,” which, as Holling notes, “was a flat-out lie on Doug Swieteck’s part.” And the academic problems that Doug clearly had at Camillo Junior High are even more present in Marysville, where the teachers are disinclined to like him from day one because of his family’s reputation:

Miss Cowper in English, whose first words were “This fall, we will be reading Jane Eyre by Miss Charlotte Bronte, and I am not naive enough to believe that you will all like it.” Then she looked right at me.

And while we are on the topic of Jane Eyre, let me mention that it, like the Audubon paintings, plays a major role in the plot. At the risk of spoiling something, let me tell you that when, on the airplane to Utah, I read the line “Reader, I kissed her. A quiet walk back we had, she and I,” I almost leapt from my seat with delight.

Like The Wednesday Wars, this is a book that defies a tidy description. It’s about art and Audobon’s birds, it’s about people who can only see the “skinny thug” who comes from a problem family and the occasional insightful person who is able to see past the label to the real Doug, it’s about soldiers returning from the Vietnam War to a place that no longer seems like home, it’s about families where no one discusses real problems and you hide anything you value so it doesn’t get mocked or destroyed or both.

And yet, for all the sadness of this book, the humor is there in full force. I found myself marking line after line that made me laugh. A few examples because I can’t not share. The first is during a wrestling unit in gym class, led by “the So-Called Gym Teacher” who hates Doug:

He said he’d call out the names two by two, starting with the first pair to wrestle. Guess who was in the first pair. My partner turned out to be Alfred Hartnett. I’ll let you guess again: do you think Alfred Hartnett weighed about the same as me, or about sixteen times more?

Mrs. Daugherty was keeping my bowl of cream of wheat hot, and she had a special treat with it, she said. It was bananas. In the whole story of the world, bananas have never once been a special treat.

And he handles the intense moments just as well as the humor. When there is a particularly ugly conversation at dinner one night:

There’s a kind of angry quiet that can lay down over a house. Maybe there are some houses, like the Daughertys’, that have never known it – that house probably hasn’t ever had a quiet day. But in the The Dump, Angry Quiet was an old friend, and he moved in again. No one talked because we all wanted to scream.

Okay For Now is so brilliantly written, so full of depth and beauty that any adult will love it. But it’s so full of heart and humor and real-life that children will love it too. Read this book. Your life will be better for it. I promise.