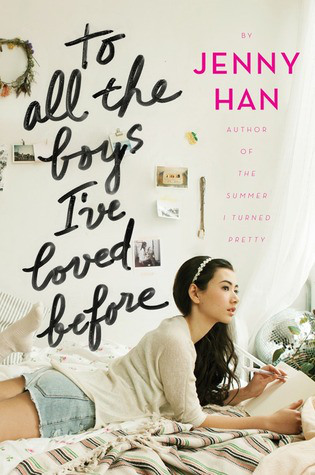 There have been long periods on this blog where I’ve wanted to write about books I’ve loved but . . . I haven’t read anything I’ve loved.

This is not the case this summer. And it is a delightful feeling.

To All the Boys I’ve Loved Before by Jenny Han might be my favorite read of the summer so far, actually. I’ve been waiting for a copy for months and it didn’t disappoint.

To All the Boys I’ve Loved Before by Jenny Han

Since their mother died years earlier, Margot has taken the lead in the family, taking care of her younger sisters, Lara Jean and Kitty.

But now Margot is heading off to college in Scotland, and Lara Jean is going to have to keep everything running smoothly (their dad is a doctor and although he’s a good dad, he’s gone a fair amount).

Already nervous about living without Margot, who she’s always been extremely close to, Lara Jean starts out life as the oldest with a bang, smashing Margot’s car within just a few hours of her departure.

And that quickly seems insignificant when the love letters she’s written to the five boys she’s liked over the years (and stowed away, never to be shown to anyone) somehow get mailed to their (un)intended recipients.

Horrifyingly, one of those recipients is her next-door neighbor, Josh, who is not only one of her closest friends but also Margot’s boyfriend of the last two years.

Desperate to keep from ruining her friendship with Josh (and having Margot ever find out she liked Josh in the first place), Margot pretends she’s dating Peter Kavinsky, who was also the recipient of a love letter and her first kiss, some four years earlier. Peter has just broken up with his long-time girlfriend, and he’s willing to go along with the scheme because he thinks it’ll make his ex-girlfriend crazy with jealousy.

Of course, if you think it’s complicated having your secret love letters sent out, just try having a ridiculously handsome pretend boyfriend who you don’t actually like that much. And trying to keep your relationship with the boy you DO like (Josh) somewhat normal while also not betraying your sister. Yes, it’s all very complicated (and amusing).

To All the Boys I’ve Loved Before was one of those books that was just delightful from beginning to end. I didn’t really realize until about 3/4 of the way through that I had no clue how this was going to play out. And I loved that. It’s so unusual to read something that you don’t know from basically the first 10 pages who will end up with whom and the basic way it’s going to unfold.

And it’s just so nicely written. The characters are real and well-rounded, the dialogue is funny but not unbelievably so, and it’s nice to read a book where a family is generally happy and functional (obviously, the sisters bicker and there are family tensions, but there are no giant issues).

I also love that the moments where Lara Jean does crazy things (for instance, when Josh confronts her at school about the letter, and in a flash of pure idiocy, she says she’s dating Peter and then runs down the hall and kisses him out of nowhere) are actually believable. It’s the kind of crazy thing you could actually imagine someone doing when they feel desperate and without options.

And let’s talk about how much I LIKE Lara Jean. She’s fairly quiet and has lived most of her life (happily) in Margot’s shadow. She’s not sure what she wants to do with her life, and she mainly likes spending the weekends at home with her sisters and dad. She quietly likes a variety of different boys over the years, but has never really done a thing about it.

And her fake relationship with Peter works beautifully to really let you into Lara Jean’s world. I loved the initial awkwardness between them and then the eventual friendship they develop as they become comfortable with each other. I love that you get to see why all the girls are in love with Peter, but you can also see the things that made Lara Jean immune to him after middle school. And Lara Jean also gets a taste of what it’s like to be dating someone popular and confident – it’s much different than what her own school experience has been like.

But over all, it’s about as good a YA book as I’ve read in years. I kind of want to give a copy to everyone I know.

Seriously, if you’re looking for an addition to your YA summer reading list, add this one immediately.

Happily, Jenny Han wrote both a sequel and then a third book to round out the trilogy and they are both EXCELLENT (I included the final book in my 2017 Summer Reading Guide here).

I’ve also read several other books by Jenny Han, including The Summer I Turned Pretty series, which started out strong but waned by the end for me, and the Burn for Burn series she co-wrote. The Burn for Burn trilogy has a completely different feel, but I blazed through it on audio in a couple of weeks.

And as you probably already know, Netflix made a full-length movie version of To All the Boys I’ve Loved Before and it is really well done. I threw a viewing party the day it came out and then wrote many many thoughts about the movie here (spoiler: I loved it).

If you liked To All the Boys I’ve Loved Before by Jenny Han and are looking for some other similar books, here are a few of my favorites: