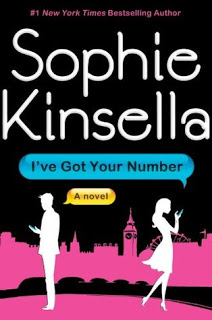 I love Sophie Kinsella books. I’ve read every one of her books and almost without fail (Remember Me? was the big exception), her books delight me in a way that almost nothing else does.

I know I’ll laugh and there will be a nice romance and I’ll basically just completely enjoy a day of absolute pleasure reading (I’ve never been able to make her books last longer than a day for me because they’re such quick reads and I can’t put them down).

And I’ve Got Your Number is one of my favorites.

i’ve got your number by sophie kinsella

Poppy starts the book in a complete panic – her family-heirloom vintage engagement ring is gone. She was passing it around at an event to a few friends when the fire alarm goes off and when the chaos settles, no one seems to remember who had it. Poppy desperately passes out her phone number to all the hotel staff, begging them to keep an eye out for it, but then, when she goes to make a phone call outside, a passerby nabs her phone.

But, just when all seems lost, she notices a cell phone abandoned in a trash can in the hotel lobby. She gives the number to the front desk and then is about to leave when the phone rings and a man on the other end begs her to stall the businessman for five minutes until he can get down to the lobby. She uncertainly agrees, eventually ending up (as only a Sophie Kinsella heroine can) doing a singing telegram delivery of “All the Single Ladies” with the words swapped out for the businessman’s name instead.

Ten pages in and I was already snorting with laughter.

Sam, the guy on the other end of the phone, is NOT happy to discover a stranger now has his personal assistant’s phone (she was a daughter’s friend that he’d hired and then, when a modeling contract came up, promptly ditched the phone and went on her merry way), but Poppy spills her sob story about the missing ring and convinces Sam that he owes her for helping out with detaining the businessman and he agrees that she can keep the phone until her ring is recovered. Under the condition that she forwards along all messages and emails that come in.

The phone is really the least of her worries at the moment, because her in-laws do NOT care for her (they are both PhDs in obscure subjects and mostly just seem bent on making her feel as stupid as possible), and that’s even without knowing that she’s lost a priceless heirloom. And the wedding is only about eight days away so THAT’S not helping matters either.

Of course, a nice distraction to all of this is reading someone else’s emails and Poppy finds herself rather absorbed by reading all of Sam’s correspondence. And because he seems so remote, she finds herself occasionally texting him about her worries about the in-laws, the missing ring, and also how he might improve his business.

It’s no surprise that some sort of romance is going to spring up between them – the fun is watching it all unfold.

And I’ve Got Your Number just made me laugh so much. And then, without warning, I’d be a little teary too at some particularly sweet scene. This book was just pitch perfect for me. I’ll definitely be rereading my favorite parts before it goes back to the library.

In Sophie Kinsella books, she always writes such sweet characters, and I like each couple as much as the last.

If you haven’t read any Sophie Kinsella books before, I’ll give you fair warning that there is some swearing and a few brief references to off-stage sex. If you have read her books before, you can imagine what a fun, delightful read you’re in for.

Frankly, I love her books that aren’t the Shopaholic series because the crazy spending gives me panic attacks just to read. This one ties with Can You Keep a Secret? as my favorite of her books.

Copy from my local library