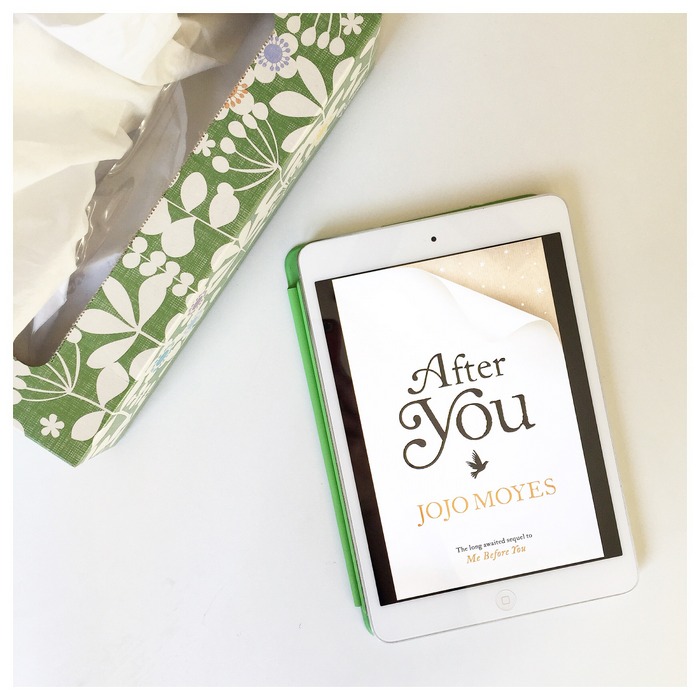 One of those things that makes me crazy is reading a sequel when I can’t remember the first book very well.

And I had really good intentions of re-reading Me Before You (which I really really liked) before reading the sequel, After You, that came out in September.

But then I didn’t get around to it and my hold for After You finally came up and I knew that if I didn’t read it immediately, I wouldn’t come up again on the holds list until approximately March of 2019. So I just read it with a bit of fuzziness around the events of Me Before You.


And if you haven’t read Me Before You, consider yourself warned that there will be spoilers in this post. Away with you if you don’t want to know how it ends.

When I finished After You, I went back and reread Me Before You and now both books are fresh in my mind and I have many things to say (one of which is, “I’m tired of writing out these titles”), especially because when I mentioned on Instagram that I was reading this, lots of people were curious to know what I thought of it.

after you by jojo moyes

After You by Jojo Moyes starts up a year or so after Me Before You ended – Lou has done her traveling around the world and is now settled in London in a flat she’s bought with the money Will left her. And she has a very glamorous job in an airport bar (did I say glamorous? I meant “pretty sad”).

Her relationship with her family is still somewhat strained and basically her life in general is a depressing disaster. Not probably what Will was hoping for her. She’s not exactly moving on.

Then, she falls off the roof of her apartment building by accident and, happily, manages not to die, but her whole family (and, to be honest, everyone else) suspects that it was a suicide attempt. Lou isn’t suicidal, but the state of her sad little life isn’t exactly reassuring to people when she insists she wants to live – what exactly is she living for?

And then, a teenage girl shows up on her doorstep, hoping for a place to live temporarily while her family life is a mess and against all odds, Lou says yes to Lily who, in my humble opinion, may be the most annoying teenager on the face of the planet. Lou is a better person than I am, because I seriously doubt I would have taken her in.

Also, she starts to become friends with the (good-looking) paramedic who arrived on the scene of her fall and, despite her conflicted feelings about any type of moving on after Will, she does start to think there’s at least a possibility she might find someone in the future, whether it’s this guy or not.

And she’s going to a support group for people who have lost loved ones which is full of some. . .characters, to say the least. I couldn’t keep track of them at all, except for the teenage boy who lost his mom. Also, Lou’s mom and dad are having a falling out over feminism and leg-shaving. And Will’s dad has divorced his wife, married his mistress and now they’re expecting a baby together.

There’s just a LOT going on, basically, but I also had kind of this sense that nothing is actually happening in the book.

I don’t doubt that getting over the events of the first book wouldn’t be the work of a month or two, but that doesn’t necessarily make reading about it particularly fun. I didn’t have a hard time getting through it, and I read it in a couple of days, but I wasn’t delighted by it.

It’s a little more graphic and darker than Me Before You, and it kind of felt like it was missing that spark Me Before You had.

When I went back and read Me Before You, I kept laughing out loud – what really made that book for me was the rapport between Lou and Will. Without Will, this book just didn’t have the charm that delighted me so much in the first one. Even if I felt impatient with Lou at times in the first book, she had a lot of spunk and wit and she was much less like that in this one.

I get that that’s probably the point, what with her reeling from a significant loss, but that doesn’t make it particularly fun to read.

Also, I’ve read enough Jojo Moyes books to recognize that she has a taste for the slightly absurd situations, but this one was just one. after. another. By the end, I kind of felt like, “Well, what MORE insane and unlikely event could take place now?”

I don’t have that “she should have left it alone” feeling about this book – it doesn’t bother me that Moyes wrote another book about Lou or feel like it affected how I felt about the first book – but it wasn’t really a book I just wanted to talk about with everyone unlucky enough to ask what I’m reading. (Which may be a positive for this book, if you happen to be married to me).

One final thing – there was no need for tissues in this book. At least not for stone-hearted me.

So! If you’ve read After You by Jojo Moyes, I’d love to hear what you thought of it. Love it, hate it, have complicated feelings about it like I obviously do?

If you liked this review of after you by jojo moyes, you might also like these books: