Every year since 2012, I’ve done a Christmas picture book list.

Then, a few years ago, several people started asking if I would do a list of longer Christmas chapter books to read-aloud with their kids during December.

Such a thought had never actually crossed my mind (because I am totally brilliant, obviously), but immediately I was all about this really good idea.

And since then, we’ve loved reading a Christmas chapter book each year in December.

Here are a dozen Christmas read alouds that would be great choices. 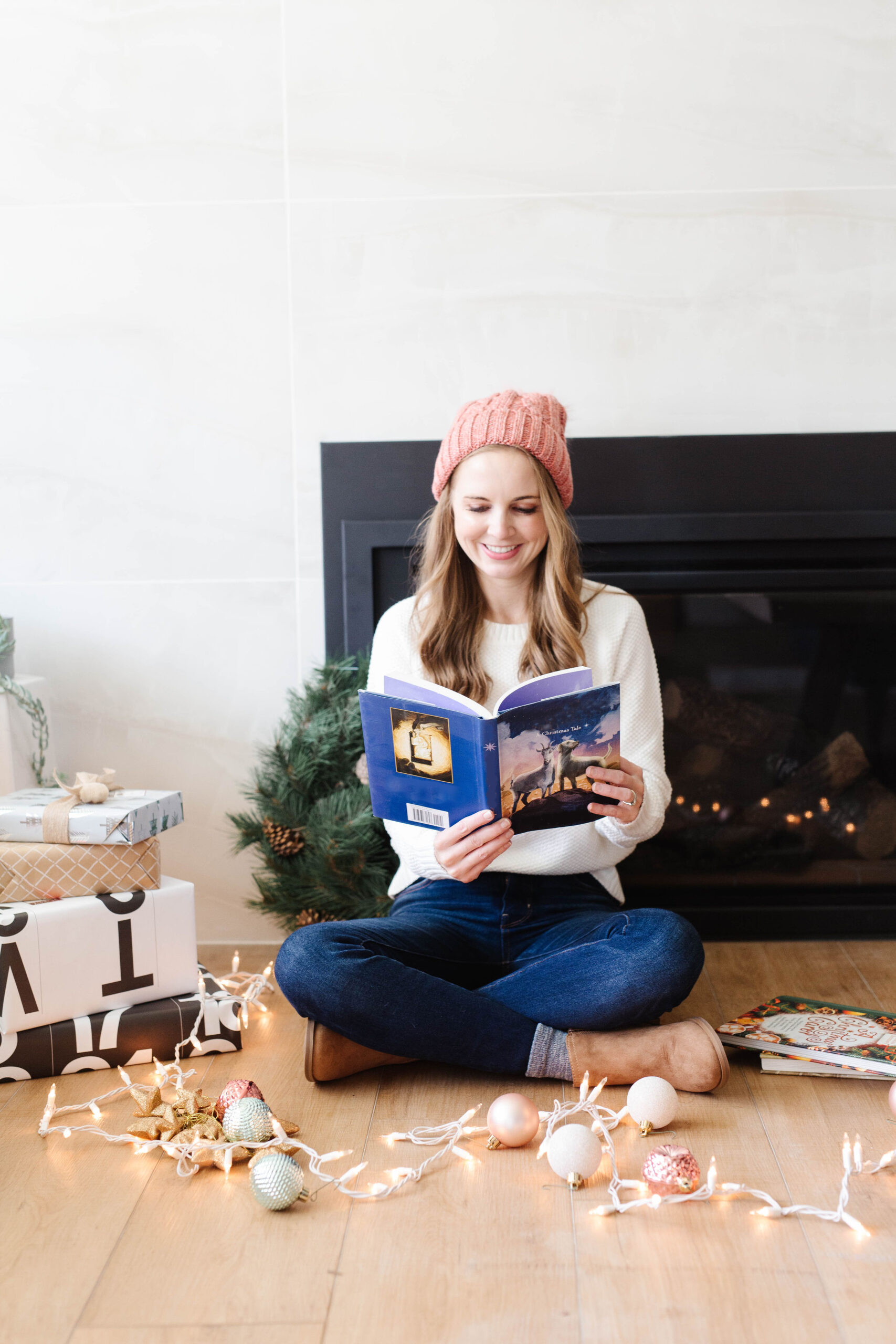 A Return to Christmas by Chris Heimerdinger
Of all the Christmas read alouds I remember from my childhood, this is the one I remember best. It’s out of print now, I think,  but you can get a second-hand copy for just a few dollars. This story follows two eleven-year-old boys, one of whom hates Christmas, thanks to a tragedy that occurred when he was very young, and the other who lives by his wits as a con artist. We met the author the year we were reading it and told him we were reading a chapter a day (the book has 25 chapters), and he told us, “You’ll never be able to hold out.” And he was RIGHT. It was one of those books we couldn’t put down. I think my mom bought a copy for everyone in our extended family the next year.

The Christmas Pig by J.K. Rowling
This was my London souvenir to myself – I bought it at one of my favorite bookstores in central London and the girls and I jumped into this year’s Christmas read aloud right away. It’s such a delight so far! Jack loves his beloved stuffed pig, DP, and when DP is lost, he’ll do whatever it takes to get him back, including going to the Land of the Lost, which can only happen for a human boy on Christmas Eve.

The Best Christmas Pageant Ever by Barbara Robinson
I mean, what would a Christmas chapter book list be without this book? I cannot WAIT to read this one with my girls – I know they’ll get a huge kick out of the Herdman siblings, dubbed “the worst kids in the history of the world” who show up at church because of the free snacks and somehow take over the whole Christmas pageant. This one is a nice short read, so if you’re looking for something that you can get through in a couple of days or a week, this is a good pick.

The Vanderbeekers of 141st Street by Karina Yan Glaser
If you love family stories and realistic middle grade fiction, this one is for you. The Vanderbeeker family loves their brownstone apartment in New York City. And they’re devastated when, for unknown reasons, their grumpy landlord refuses to renew their lease just before Christmas. The kids are determined to keep their family in their home, no matter what it takes.

Nancy & Plum by Betty MacDonald
I know Betty MacDonald because I’m a massive fan of Mrs. Piggle Wiggle, and when I saw this Christmas novel with illustrations done by Mary GrandPré (who did the illustrations for the original Harry Potter books), I was completely in. Also, two orphan sisters in a terrible orphanage? Count me in. It’s been republished from the 1950s and at 240 pages, it’s a good choice for the whole month. We read this one last year and it’s so sweet and charming.

The Last Holiday Concert by Andrew Clements
You may know Andrew Clements from his wildly popular book Frindle and this one is just as delightful – no one does school stories like Clements! We listened to this one on audio a few years ago in the car and all were totally into it. Hart Evans is the most popular kid in the sixth grade, even with the teachers. Except for the choir teacher who has just found out he’s losing his job thanks to budget cuts and is NOT in the mood for Hart’s hijinks. When Hart goes too far, the choir teacher says its up to the kids to put on the holiday concert themselves, with Hart at the helm.

When Santa Fell to Earth by Cornelia Funke
We love Cornelia Funke at our house (she’s the author of the Inkheart series!) and this is a perfect Christmas read aloud! This quirky and delightful story starts when Twinklestar, one of Santa’s reindeer, is terrified by a storm and makes a run for it, leaving Santa stranded on earth. The neighborhood he lands in is kind and welcoming, but the Council of Yuleland is headed by Jeremiah Goblynch who wants to end Christmas wishes and turn the holidays into a moneymaking bonanza for himself.

The Family Under the Bridge by Natalie Savage Carlson
This is a classic set in Paris (and I’m never going to say no to Paris), following Armand, an old man who lives on the streets and loves his solitary life. Until he meets a poor mother and her three children and feels drawn to helping them, including sharing his home under the bridge with them. Also, the illustrations are by Garth Williams, who did the illustrations for Charlotte’s Web and Laura Ingalls Wilder’s Little House series, so you know it’s going to have the coziest, most classic feel.

Kringle by Tony Abbott
I always am in for a good backstory, and this one, about an orphan who grows up to become Santa, is a total showstopper, with him coming-of-age in 500 A.D. If you want goblins, elves, reindeer, and all your good fantasy elements, this story is for you. In this tale, goblins kidnap human children and use them as slaves in underground mines. And Kris Kringle takes on as his personal mission to free his fellow child slaves from the evil goblins, continuing on today as each Christmas Eve, he works to keep down the goblin uprisings. We’re on hold for this one at the library and I can’t wait!

The Girl Who Saved Christmas by Matt Haig
We’re listening to this holiday read aloud right now in the car and my girls are SO into it. It follows Amelia Wishart who was the first child ever to receive a Christmas present, thanks to her Christmas spirit. But that Christmas spirit is draining away since she’s stuck in the workhouse while her mother is ill and without it, magic levels at the North Pole are becoming dangerously low. This one is a follow-up to A Boy Named Christmas (which I haven’t read yet), but you don’t need to have read it to enjoy The Girl Who Saved Christmas.

How Winston Delivered Christmas by Alex T. Smith
This book just came out this fall and it’s getting SO MUCH buzz. I just got my hands on a copy and I’m in love and can’t wait to use it with my girls this December. It has a chapter for every day in December before Christmas that follows a little mouse who finds a lost letter and is determined to get it to Santa. There are also activities and crafts that go along with each day, if you want to do them.

The Christmas Genie by Dan Gutman
We love Dan Gutman around here and Ella included this book in a recent Ella Enjoyed post about her favorite books.On the last day of class before the holiday break, things go awry when a meteorite crashes through Mrs. Walter’s fifth-grade classroom window. And even more amazing? A genie appears form the meteorite and will grant one wish for the class to share. That is IF they can agree on what that wish should be before the final bell rings. 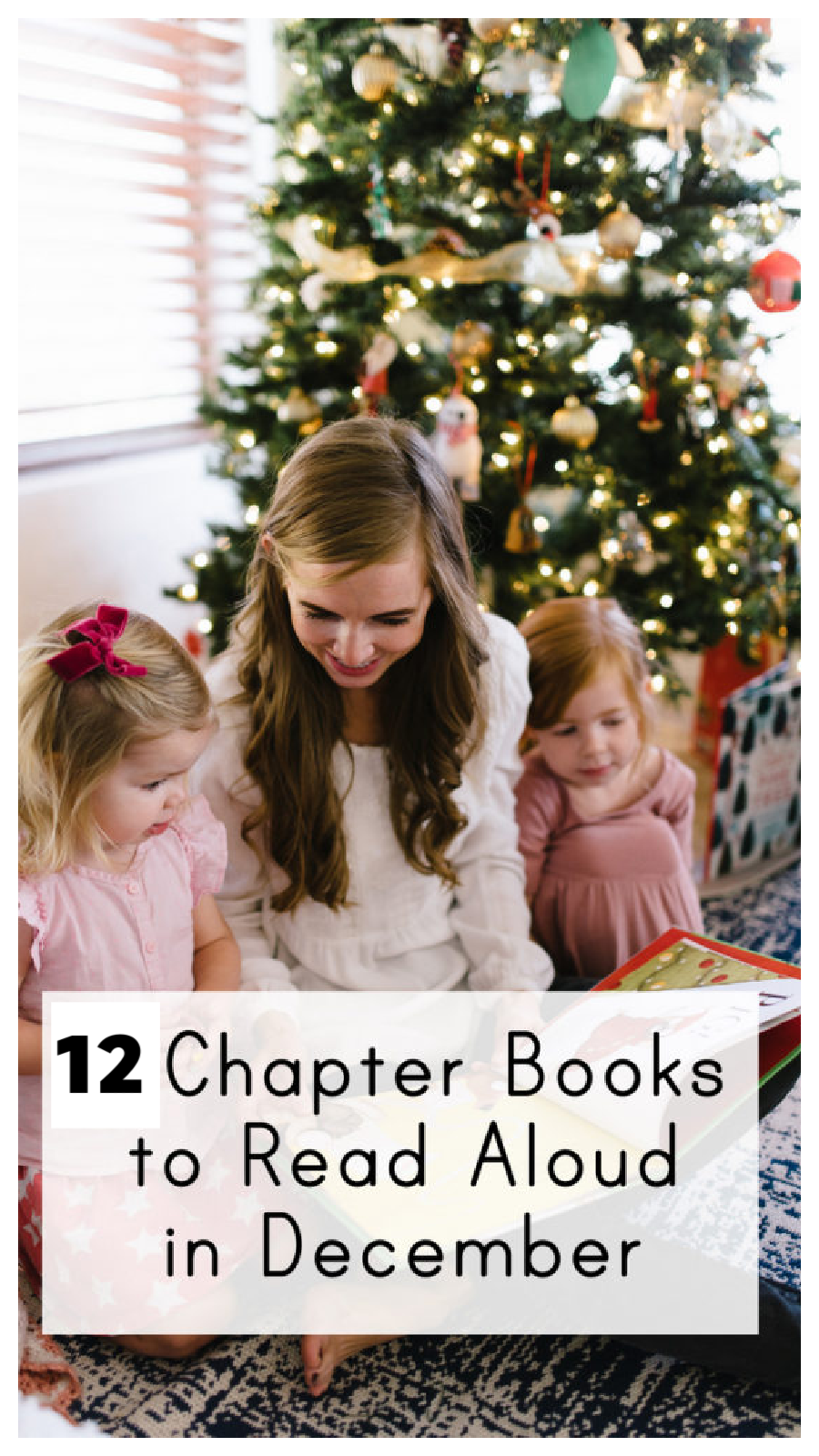