A few weeks ago, when I did a post about my favorite mystery titles, I got some requests to do a similar list but for elementary school readers!

Luckily, Ella is a massive mystery reader and we had a great time putting together a list of mystery books for kids!

Whether you’re grabbing them on audio, reading them aloud or handing them to a child to read solo, I hope these will be hits at your house! 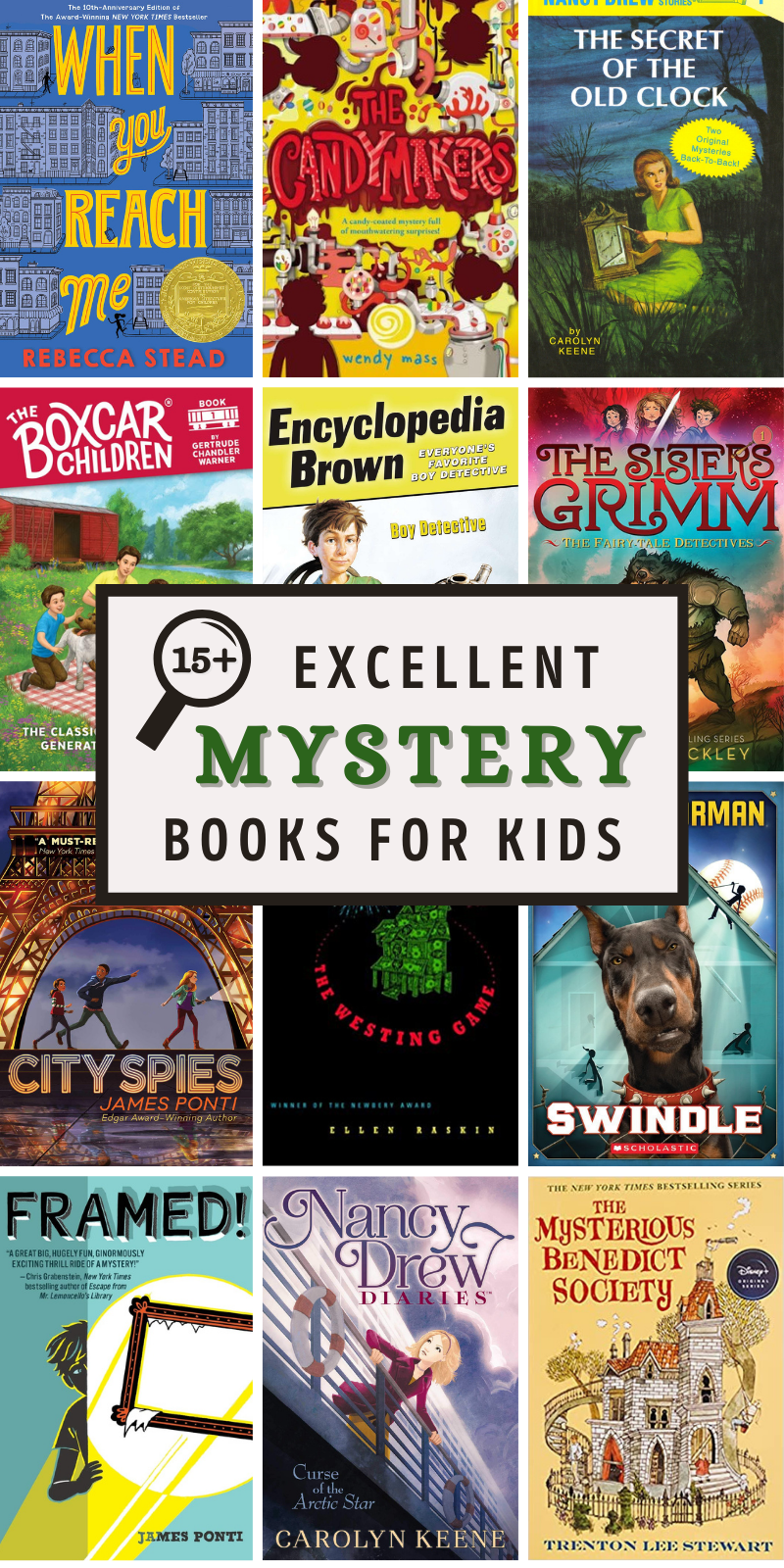 The Westing Game by Ellen Raskin
This classic Newbery-winning mystery begins when sixteen strangers are summoned to the will reading of Samuel W. Westing, a well-renowned millionaire and game player. Anyone of these sixteen people could end up with his fortune, but only if they could find the answer to the confusing and mysterious game he has them take part in.

When You Reach Me by Rebecca Stead
I read this book and loved it, but couldn’t quite figure out what to say about it so I never did a full review. It’s quirky, to be sure, but fun and extremely readable. This book was universally a winner in the mock Newberys around the country the year that it was released and ultimately won the gold sticker. (Also check out her book Liar & Spy if you want more mystery books for kids).

39 Clues series by Rick Riordan
Grace Cahill, the last matriarch of the world’s most powerful family, is on her deathbed and makes a quick decision to change her will. Those inheriting anything have to choose between taking a clue or one million dollars. The 39 clues are hidden around the world to reveal the family’s secret to their source of power. Can Dan and Amy put all of the clues together or will they abandon the mission completely to discover what happened to their parents? This series has each book written by a different popular author.

Chasing Vermeer by Blue Balliett
Some very unexplainable things are happening. Both Petra and Calder are experiencing these bizarre events and are brought together when a famous Vermeer painting disappears. They are now caught in the middle of an art scandal and must figure out how to wipe their names from the suspect list.

Nancy Drew Diaries series by Carolyn Keene
I grew up reading the original Nancy Drew books so it’s fun to see the same characters in this new version of the mystery stories. Ella LOVES this series and has read them over and over again.

Nancy Drew by Carolyn Keene
Ella got hooked on the Nancy Drew series because there were some included on the Amazon FreeTime Unlimited books on her new Kindle and then she discovered we had a whole set of them on my bookshelf. I grew up with Nancy Drew (my mom bought a huge set of the original yellow hardcovers from a friend for $5 or $10!). And, of course, don’t forget the equally beloved Hardy Boy series.

Theodore Boone series by John Grisham
Theodore Boone is 13 years old and obsessed with the law. He dreams everyday of becoming a lawyer is is constantly networking himself and studying the law. Because of his nosy nature, he ends up in the middle of a murder case and only Theo knows the truth about the main suspect. As an adult reader, I didn’t love it nearly as much as his adult mysteries, but it’s still a fun read. (Full review here)

Among the Hidden series by Margaret Peterson Haddix
In this book, the world is run by the Population Police who made it a law for citizens to only have two children. Luke is an illegal third child, therefore he has lived in isolation for twelve years and is considered a Shadow Child. One day, Luke unexpectedly sees a girl’s face in a home he knows only have two children. Will Luke and Jen be able to ever meet? And even bigger, can they ever come out of the shadows? Her books are SO GRIPPING – she has about a million.

Boxcar Children by Gertrude Chandler Warner
I was obsessed with this chapter book series growing up and read probably a hundred of them. I like that the mysteries aren’t too scary and I really love that they showcase siblings that like each other, get along, and work together to solve problems

The London Eye Mystery by Siobhan Dowd
Ted and Kat tend to bicker a lot, until they watch their cousin Salim get on The London Eye ferris wheel and never get off. They have to work together to make some headway on the investigation that police can’t even figure out. This one is hard to put down once you start.

The Candymakers by Wendy Mass
The Candymakers is just the kind of book I wish my school libraries had been full of. Funny, mysterious, and clever. Four kids trying to invent a new candy, all of them harboring secrets? This book is a winner. (Full review here)

Encyclopedia Brown series by Donald J. Sobol
I read and re-read these books as a child and loved trying to figure out the mysteries before flipping to the back to check out the answer. Also, I just really want an encyclopedic memory.

The Sisters Grimm series by Michael Buckley
I first heard about this series nearly a decade ago from my mother-in-law who read it with one of my nieces and Ella spent a year blazing through the ten books of the series. Two orphaned sisters are sent to live with their grandmother (who they didn’t even know existed) in a strange little town called Ferryport Landing. When they arrive they soon learn that they have descended from the Brothers Grimm and the book of fairy tales those brothers wrote? Is actually history. And as one fairy tale mystery after another pops up in their town, it’s up to the sisters to solve the mysteries. This series is just DANG fun, with all the characters from every fairy tale you know popping up. The question is, who can they trust and who is trying to take them down?

The Mysterious Benedict Society by Trenton Lee Stewart
I read this book back when I was a school librarian and have been a fan ever since. We listened to the whole 13+ hour audiobook in the car and my two older girls both LOVED it. As soon as we finished, Ella checked out the rest of the series and listened to them in a week (oh, to have that much listening time. . . ). The book begins with a strange ad in the newspaper asking super smart children to apply and when four children pass the test put before them. Now their job is to go on a secret mission at a mysterious school called the Learning Institute for the Very Enlightened, and puzzles, tests, and riddles will be everywhere they turn. The television series on Disney+ is also REALLY great.

Framed series by James Ponti
Ella has loved the City Spies books, so when I discovered this mystery series by the same author, I snagged them all for Ella who blew through them in a week. This book follows Florian Bates who is the only kid that the FBI Director has on speed dial (and a kid that a whole lot of criminals want taken care of). After a move to DC, Florian and his new friend Margaret uncover a mystery that involves a major crime ring, the FBI and the National Gallery. It’s up to them to solve the mystery AND get their homework done.

City Spies by James Ponti
City Spies is the story of five kids from all over the world brought together to operate out of a secret MI6 base in Scotland, working on cases that adults can’t get anywhere near. It’s clever and funny and fast-paced and a total kid pleaser. This is the first in the series which currently has 3 books.

Swindle series by Gordan Korman
This book was on my 2019 Summer Reading Guide as a book for the whole family to enjoy and it’s such a fun heist story. I used to read this one aloud to my fourth and fifth graders when I was a school librarian and it was a hit with virtually every single kid.

The Great Shelby Holmes series by Elizabeth Eulberg
The first book in this series came in Ella’s Bookroo chapter book box and after she blazed through it, she checked out the next three books in the series from the library.  Shelby Holmes is nine years old (but in sixth grade, thanks to her smarts) and she loves to solve the toughest crime. And when John Watson – the narrator – moves in to her Harlem neighborhood? The dognappers don’t stand a chance.

And if you’d like a printable copy of this mystery books for kids list so you can take to your library or screenshot on your phone for easy access, just pop in your email address below and it’ll come right to your inbox!