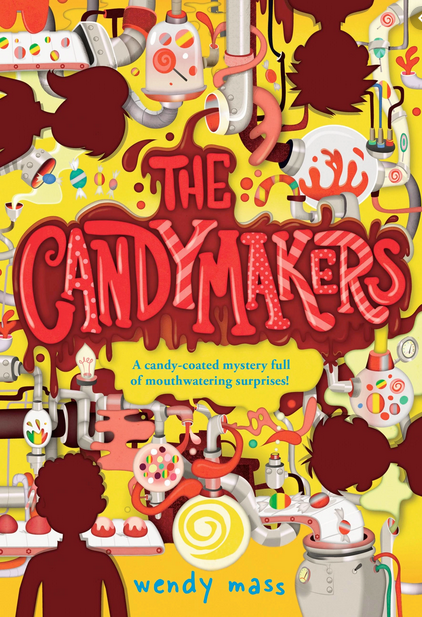 8 of 10: The Candymakers is just the kind of book I wish my school libraries had been full of. Funny, mysterious, and clever. Four kids trying to invent a new candy, all of them harboring secrets? This book is a winner.

I haven’t read a LOT of Wendy Mass books (and by “not a lot,” I mean “exactly one other one besides this title,”) but the woman is a VERY popular middle grade writer, I’m starting to realize and this one made me realize why. Wendy Mass books are just FUN.

I’ve read a number of books in the last little while that have tried to imitate the same clever, amusing feel that The Mysterious Benedict Society did well. And they have failed quite spectacularly by my standards (School of Fear was one of them – it felt like it was just trying so very very hard).
I worried originally that this book might fall into the same trap, but it neatly avoided it, much to my relief.

the candymakers by wendy mass

The basic premise of The Candymakers is that four children are meeting at a candy factory as part of a nationwide candy making contest. Children are given free rein at candy factories across the country and have several days to develop a  new candy. Then all the candies are collected and a winner is chosen.

The four children meeting at the Life is Sweet factory all have specific reasons for wanting to win. The story unfolds carefully, starting with one of the children and beginning the story from his point of view. Then, you get the backstory on the next child and you learn things that weren’t revealed by the first child. And so on until you know quite a lot about the surprising and mysterious (and, overlapping) backgrounds of each of the main characters.

This could have been mega-confusing, but it was done so well that I never had any problems following what was going on or who was thinking what.

Not only are the characters all fun and mainly likable (once you know their stories), but the descriptions of the food are KILLER. You will want a large supply of candy along with this book. I’m warning you.

This is one of those books that is just borderline fantasy. Nothing quite outright magical happens, but things that aren’t exactly possible happen too. And it’s delightful.

And it gets better as it goes along, rather than tapering off like I felt The Mysterious Benedict Society did.

It’s a little bit long of a book (it clocks in at just over 450 pages) and I know firsthand that books that fat can be a hard sell to a lot of kids, but truly, the length of it is my only hesitation. Other than that, The Candymakers was just a perfect middle grade book.