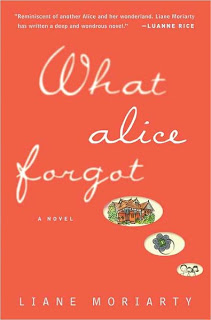 What Alice Forgot is one of my favorite books of all time. Read on for a brief summary and detailed review of this perfect chick-lit book. You’ll definitely want to take a copy of this on vacation with you.

I have a secret soft spot in my heart for chick-lit (oh, was that your respect I hear crashing down?). I don’t read a lot of it, though, because so much of it is just terrible and leaves me completely disappointed.

Every now and again, though, I read something that is just so delightful and so fun that it makes me run to the library and check out about ten more books (all of which end up being lousy and then I give up for another year or so).

What Alice Forgot? One of the ones I loved.

I’m already a sucker for books about memory loss, and so when I read a review of this a couple of weeks ago, I hadn’t even finished reading the post before I was clicking over to request it from my library. The premise is similar to Remember Me? except that Remember Me? is terrible.

Alice comes to on the floor of the gym, with a bunch of worried friends around her. They aren’t the only ones that are worried – Alice is expecting her first baby and she’s concerned that the fall might have hurt the baby (she also can’t figure out why she’s at the gym; she hates the gym).

The surprise of being at the gym, though, takes a quick backseat to the shock Alice receives when she realizes that it’s not 1998 like she thought, but instead it’s 2008. She’s not pregnant – she has three children.

And the happy, new-ish marriage to Nick that she remembers is now on the verge of divorce. It’s a lot to take in.

Now Alice is determined to figure how her life has changed so much – why has her marriage fallen apart, and who are these children, and why is her relationship with her sister strained? How has she gone from a quiet and happy twenty-nine year old to a thin, grim, nearly-divorcee at thirty nine? And is her memory going to come back? And if does, what then?

I think the key to success with this book is that it doesn’t try to play the amnesia bit for laughs. Never once does it feel gimmicky. The whole premise worked really well for me.

But it’s not just the premise that’s solid here.

The narration is carried by three different voices. There is Alice, of course, who is not only navigating the present without her memory intact, but also recounting memories of the past – meeting Nick, their early married life together, the beginning of their enormous house remodel.

Then we have Elizabeth, Alice’s older sister, who is writing letters to her therapist, recounting her own life problems and trying to deal with Alice’s sudden change in behavior. Her life stands in rather stark contrast to Alice’s, and the juggle she has between newly-resurrected protective feelings toward Alice and many years of jealousy and misunderstanding is very well-handled.

There’s also Frannie, the pseudo-grandmother to Elizabeth and Alice, writing letters to an unidentified someone. Frankly, she could have been cut, but. . . her story isn’t terrible. Just rather unnecessary.

Having all these narrators might be too much, but Moriarty works them quite masterfully. They each have distinct voices and Alice and Elizabeth’s stories, in particular, gripped me. One of the things that I hate about most chick-lit or romance novels is that you know what the ending is going to be and it’s just a matter of plowing through pages to get there. This is not like that. There was no race to the end – it wasn’t the happy (or unhappy ending) I was working for, it was the reading itself I enjoyed.

And the characters are, almost entirely, excellent. Alice is just so likeable. And Nick? I couldn’t not love Nick. Their three children are terrific as well – a little crazy, sometimes loveable, sometimes needing a good thumping (um, I don’t thump my child, just for the record). Elizabeth and her husband are also stellar, well-rounded, real characters.

There are a few characters that are maybe a bit much, but they aren’t the major characters, so I could forgive them.

What I want in a book, also, and which I feel like I so rarely get, are some twists in the plot that I didn’t see coming at all, but that work perfectly, rather than feeling contrived. And some of the ones here – they got me. I loved it.

This book made me laugh (when Nick tells Alice something she normally would have said to him in their now-poor relationship, she shoots back, “There’s a new Alice in town.” I loved her), and it made me tear up. Watching Alice interact with her children whom she doesn’t remember at all is very sweet. And her attempts to resuscitate her dying marriage are both heartbreaking and hopeful.

And what I really love is a story where I can’t see where it’s headed. Some of Emily Giffith’s books do this brilliantly, and I felt like this one did as well. Sometimes I felt certain that Alice and Nick would be reunited, sometimes I thought Alice would let the divorce run through and start a new life. Up until the very very end, I just had no idea.

I read a few reviews that said it wrapped up too quickly at the end, but I’m inclined to think that’s the point. This book wasn’t about the ending – it was about Alice seeing her life through her younger self’s eyes and trying to make sense of it. It was about her reexamining relationships and trying to decide where things went wrong and how she might fix them, and if she should even try.

There is a little bit of swearing in the book, but overall, it’s quite clean.

I finished this book and immediately emailed my mom to tell her she should read it. And really, there can’t be a much higher recommendation than that.

Is there a What Alice Forgot movie?

Right now, no, but a What Alice Forgot movie is supposedly in the works with Jennifer Aniston set to star as Alice (and I think she’s a pretty good choice!). I’m just crossing my fingers they don’t ruin it.

If you liked What Alice Forgot, you might enjoy these posts: