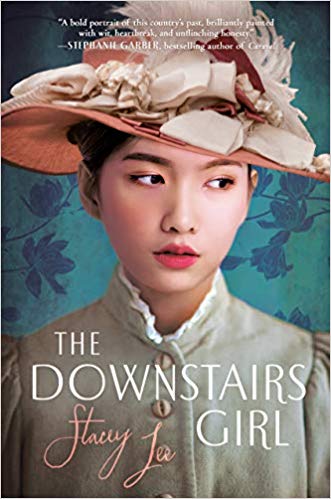 You already know that I love a bestseller. Show me a book with a ton of buzz or topping the New York Times charts and I’m very likely to want to read it.

But it’s sometimes equally delightful to dive into a book knowing absolutely nothing about it beforehand.

The latter was the case with The Downstairs Girl.

I got an advance copy in the spring and promptly put it on my shelf with my other advance copies.

A month or two later, when I was looking for my next book to read, I pulled The Downstairs Girl off the shelf and started reading, knowing nothing about it aside from what the back cover shared.

I haven’t read either of Stacey Lee’s other books, so she was new to me too.

And then I just loved every page of The Downstairs Girl and have been eagerly awaiting its official publication so I could share it with you.

The Downstairs Girl by Stacey Lee

The Downstairs Girl is set in Atlanta in the 1890s.

It’s been 25 years since General Sherman burned down much of Atlanta during the Civil War and the city has mostly been restored.

It’s also been 25 years since slavery was abolished, but the rights African Americans were granted with the end of the war are now under major attack as Jim Crow laws start being passed.

Women are also starting to vigorously campaign for their own right to vote.

Jo Kuan is a seventeen-year-old girl who has lived her whole life in Atlanta and she’s closely following all these changes.

She herself lives on the margins as a Chinese girl and is accustomed to the stares that accompany her wherever she goes.

(I didn’t know that, after slavery was abolished, many Southern growers brought in workers from China, hoping to keep their plantations running as they had before the war. They were dismayed to find that Chinese workers didn’t enjoy being worked to death and paid virtually nothing anymore than African American slaves did. Most of the Chinese workers fled North or to bigger cities and the Chinese Exclusion Act of 1882 prohibited immigration of Chinese Labors for the next six decades, which meant that there were very few Chinese in the South).

Jo feels especially desperate because in the opening chapter of the book, she’s fired from her job as a hat maker (despite the fact that she’s significantly more talented than her co-worker) and she knows her odds of finding work are very low.

Adding to her money worries is the fact that Old Gin, the elderly Chinese man who has raised her, seems to be getting ill and with her cash flow ending, she’s very anxious about how to take care of him.

Their living circumstances are also dicey – for many years, the’ve been living under the print shop & house that belongs to the Bell family that runs one of the local newspapers. There is an abandoned Underground Railway station there that the family seems not to know about and Jo and Old Gin have managed to avoid detection for a long time.

Jo also feels a lot of love for the Bell family, who doesn’t know she exists, but that she’s heard them living their lives above her for as long as she can remember and in some ways, they feel as close to a real family as she has.

With Jo’s job gone, Old Gin manages to secure Jo a new job (or an old job, since it’s a job she used to have several years earlier) as a lady’s maid for the daughter of one of the wealthiest families in Atlanta. Jo didn’t like working for them in the past and she’s not thrilled about the idea now, but it does seem marginally better than starving to death.

And as if that isn’t enough change, she overhears the Bell family discussing their dwindling subscription numbers, in large part due to a competitor publishing a wildly popular women’s advice column. Jo decides to take matters into her own hands, penning an anonymous advice column of her own, signed “Miss Sweetie” and delivers it secretly to the Bells.

Of course, they publish it and it’s wildly popular, thanks to her quick wit and strong opinions, and now Jo finds herself leading a double life, working both as a maid and as the most popular unknown writer in Atlanta.

And as if that isn’t enough, it’s becoming clear that OId Gin is hiding things from her and Jo is determined to figure out what his secrets are, despite his clear desires to keep them to himself.

I loved this book so much – it’s exactly the kind of young adult historical fiction I can’t get enough of. The writing was so good, the plot is very tight, and there were unexpected discoveries that, when they’re revealed, seem so obvious in hindsight but that took me completely off guard.

Stacey Lee has two other historical fiction titles (Outrun the Moon and Under a Painted Sky) and I can’t wait to read those ones too.

If you’re looking for a really well-done historical novel, you can’t do better than The Downstairs Girl.