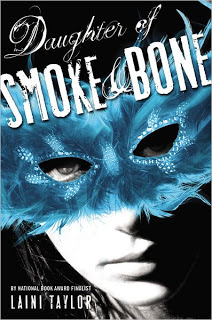 You know how sometimes everyone is raving about a book and you just feel certain you won’t really like it?

That was Daughter of Smoke and Bone for me. I read one gushing review after another and my copy from BEA just sat under my bedside table.

Part of my hesitancy was that I read Lips Touch Three Times a couple of years when it was a National Book Award Finalist and I did not particularly care for it.

So, that was a big strike right there for me.

And then, also, other-world fantasy is. . . just not my genre.

Which means that I’m admitting that I was wrong and I loved Daughter of Smoke and Bone, just like everyone else I know. It’s just that good.It’s not only so good that I forgive it for being a trilogy (really? can NOTHING stand alone anymore?), I’m actually happy there is more to come.

And, this isn’t borderline fantasy. It’s a full-on other species, angels, collections of human teeth, flying/cursed beings fantasy.  I should have hated this book.

daughter of smoke and bone by laini taylor

You don’t really need to know a lot about the plot – and, really, it’s probably a more enjoyable read if you can just be surprised by how everything plays out – but I will tell you that it’s blue-haired, art student Karou’s story. She lives in Prague and has no idea what her background is. She’s grown up in the shop of a monster, a part human, part many-other-animals chimaera named Brimstone who mainly deals in human teeth. Karou has spent her childhood watching him barter for teeth and, eventually, being sent to collect them herself, but she has no idea why.

Now she lives in an apartment, attempting to have a somewhat normal life, although she continues to visit the shop (which acts as a portal that can open to anywhere on earth), and run errands for Brimstone.

And then, on one trip to Morocco, an angel appears and tries to kill her. Karou (who is just exceedingly tough, gutsy, and all-around excellent) manages to get away, but she realizes quickly that this wasn’t an isolated incident.

Something much bigger is going on – she’s already been noticing that Brimstone is running low on teeth and that black hand prints are showing up on the doors around the world that lead back to his shop – but she has no idea what it might be and Brimstone and those that work with him aren’t saying a word to her.

But, whether they like it or not, she’s about to find out exactly what’s going on, perhaps more than she would have wanted to know.

This book starts fast, and just gets better from there. The pace is very quick, without feeling frantic. I didn’t have that “I can hardly breathe” feeling as I read – instead it was more of a “I just want to keep reading and reading” feeling. I loved every page.

I like it when a book surprises me, but I especially like it when a book surprises me in a way that makes me think, “Of COURSE this is how it had to be. Why didn’t I see that coming?”  To me, that’s one of the signs of a good writer. There’s no need to throw something absurd in to catch you off guard, but it’s not so obvious you figure it out within a few pages. This book delighted me over and over again as the story unfolded.

Daughter of Smoke and Bone is definitely written for older teens, I think (at least, I wouldn’t hand it over to a thirteen your old), but it’s not overly graphic. It’s just quite intense, has some fairly dark parts, and has some, er, mature relationships. This is very much a high stakes book; you can sense almost immediately that there is no guaranteed happy ending for anyone.

This book deserves every word of praise its received.  I usually feel annoyed that I’ll need to reread or at least skim a book before starting the second book of the series, but in this case, I am eagerly anticipating a second reading.

I don’t usually link to other reviews, but I really loved Kim’s, and I always enjoy the clever things that Angela Noelle has to say about the books she reads. If you’re still on the fence about this book, they might convince you.

If you liked this review of daughter of smoke and bone, you might also like these books: