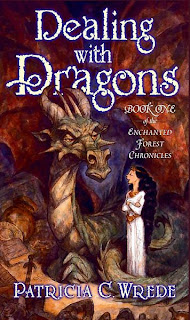 8 of 10: Dealing with Dragons was all you could ask for in a children’s fantasy – funny, clever, fast-paced, and a strong, terrific heroine.

This was the book Smalldog proposed last month for Tell Me What to Read. I put it on hold and when I went to pick it up, the librarian at the children’s desk (who is everything you could ask for in a children’s librarian) said, “Oh, have you read this?” When I replied that I had not, she smiled and said, “You’re in for a treat!”

Isn’t that what you want to hear when you pick up a book you know nothing about? (Yes, yes, it is).

And she was right – Dealing with Dragons was delightful. Just the kind of book I’ll be handing to my children to read or possibly reading aloud to them if I can figure out how to pronounce ANY of the names in the book (which is highly doubtful).

The story follows Princess Cimorene (see? how would you pronounce that name?!) who is not particularly interested in the etiquette lessons she’s forced to endure. She makes do by convincing various staff to teach her to fence, perform magic, etc, but of course she’s always caught and told such pursuits are “not proper.”

The final straw comes when she is to be married to a prince who doesn’t particularly care for her and whom she thinks, predictably, is a total bore. And so Cimorene runs away, finds herself in a dragon’s lair and gets herself hired on as a dragon’s princess, responsible mainly for cleaning and cooking and running errands.

Cimorene is delighted and her dragon is very smart and seems to like her a great deal, so this is a good scenario all around, except that princes keep showing up in order to defeat the dragon and rescue Cimorene who is decidedly uninterested in being rescued.

And then it suddenly becomes fairly apparent that the wizards, whom the dragons have an uneasy accord with, are plotting something and Cimorene is determined to find out what it is, whether it’s by venturing into the forbidding caves the dragons rule or pretending to be an empty-headed princess when the wizards come snooping around.

And it doesn’t take her long to discover that something is definitely afoot.

Oh, Dealing with Dragons was so delightful. I keep remembering all the clever things that happened, like the princes who are turned into stone, and the jinn that tries to kill off Cimorene, and the other dragons’ princesses who are constantly comparing how many princes have tried to come and rescue them.

I’m determined to read the rest of the series. Even if it’s not until my kids are old enough to have me read it aloud to them.