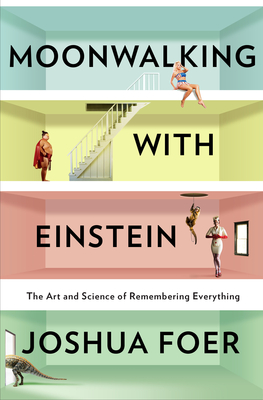 So! Book #1 of my summer reading list down. I’m quite proud of myself.

The comments were full of people who absolutely loved Moonwalking with Einstein and predicted I would as well.

Which means it’s hard for me to say that it wasn’t my favorite book.

I liked it, but I didn’t love it. It’s not one I’d particularly recommend, frankly.

moonwalking with einstein by joshua foer

Moonwalking with Einstein is kind of two separate things.

On the one hand, you have a bunch of history about memory – how ancient civilizations viewed memory, some of the well-known (and lesser-known) studies and tests of the human memory, people who either have lost their memories or have incredibly amazing memories, and basically all sorts of fascinating trivia and history about the human mind.

This part, I loved. I recounted stories and studies to Bart. I underlined things like “life seems to speed up as we get older because life gets less memorable as we get older.”

I was fascinated by the concept of the OK plateau, where you subconsciously decide you are good enough at something and despite continued practice, you no longer improve (say, typing. Once you hit around 80 wpm or whatever, you don’t tend to get faster, even though you type probably every single day. Or driving. You don’t improve much after the first couple of years). I loved learning about how to blast through that plateau (although the answer is, to no one’s surprise, hard-work, failure, and focused practice. So, you know, no easy answer there).

I think if this had been the whole book, I’d have really really enjoyed it.

But. . .there was the other part. This was about the memory competitions that take place in the US and on the world stage. Foer covers it one year and is pretty amazed at the abilities of the competitors. But he’s even more amazed when every person he interviews tells him it’s not that they are more gifted than anyone else, it’s that they just have learned methods to remember things. He wonders if he can do it.

So he sets off to try to learn the methods and see if they’re right. Which, in theory sounds pretty interesting.

Except basically all the people he trains with are guys drinking themselves into oblivion every night and then doing high-level cramming. It’s people trying to make a killing off of some memory tricks. It’s training for a competition that, at the end of the day, seemed to me like one big party trick with people I didn’t find at all enjoyable to read about.

Even after making it to the final rounds of the US championship, Foer admits that it’s still more convenient to use a post-it note to write things down and he can’t remember where he left his keys. He’s no better at remembering general kinds of things than an average person.

Which left me thinking, “What’s even the point of all this?”

Now on to the next book, Ruby Red.