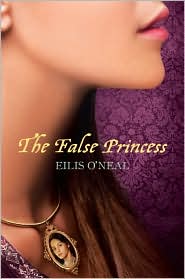 The False Princess was so so much better than I expected. A really fun younger YA fantasy that reminded me of Ella Enchanted or The Goose Girl. Definitely recommended if you’re a fantasy fan.

You know how tons of books say things like, “Perfect for fans of _______ and ________.” And how most of the time the only similarity is that the authors they reference write in English and the book you are holding are written in English?

The False Princess said it was perfect for fans of Gail Carson Levine (hello, Ella Enchanted, one of my favorite books ever) and Shannon Hale (whose books I think walk on water). I was dubious, to say the least.

People, I was wrong. The False Princess book actually is nearly on par with those books (of course, not QUITE as good, because what is as good as those books, but it really is a fun read).

The False Princess by Eilis O’Neal

Nalia is the princess and only child of the king and queen. Except, on her sixteenth birthday, her parents reveal that she’s not the real princess. A prophecy was made about the real princess, foretelling her death before she reached sixteen, and so the real princess was sent away and Nalia – a name that isn’t even hers, but belongs to the real princess – has been put in her place unbeknownst to the entire kingdom, until the danger has passed.

And now that the real Nalia is sixteen, safe from harm, she is returned to her rightful place and the false princess, whose true name is Sinda, is sent to a teeny town out in the kingdom to live with her one remaining relative, a frosty aunt who isn’t thrilled about suddenly being responsible for a teenager.

Not to mention a teenager who appears to be pretty useless when it comes to any sort of manual labor. But then, Sinda discovers she has magical abilities. Unharnessed, true, but definitely there.

Sinda returns to the city to attempt to enroll herself in the kingdom’s wizarding school, but besides magical training, she also finds a possible romance with her former friend from the court, not to mention a plot that might overthrow the kingdom. Maybe, between these things, she can find a place in the world for herself now

So you know, all things I like in a book. And this book had a few twists that I did not see coming. Clever! (or perhaps I am dumb, but I prefer to think that it’s a clever book).

Also, Sinda is such an excellent character. I feel like sometimes authors try and make their female characters super extra awesome to show girl power or whatever and it just makes it feel contrived. I love Sinda because she’s not like that – she’s strong and she’s smart. Sometimes. Other times she’s confused and makes foolish mistakes and her judgment is a little off. You know, like a real person.

I’ve already handed off my copy of The False Princess book to Ralphie; you know I like a book when I can hardly wait to pass it on.