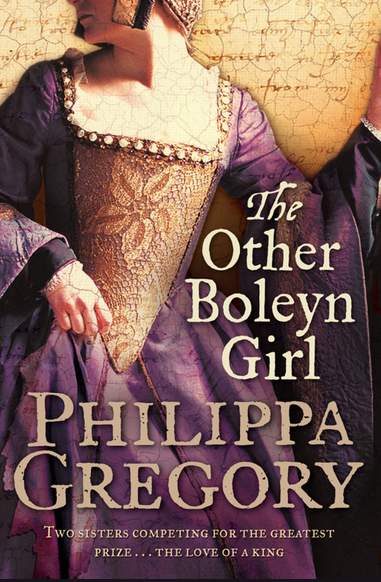 I put a hold on The Other Boleyn Girl book at the library and although I was fourth in line, it showed up just a few days later. Then, suddenly, I realized that the book was due in six days and I hadn’t even started and there was no chance of renewing it. I have learned that if I don’t read a book the first time it comes through my hands, I won’t be likely to do it the second time around. So, I was pretty determined to finish this book before it was due on Monday.

I’ve been reading loads of YA books as of late (some of which I may even eventually write about), and so 600 pages suddenly seemed like a lot. Also, the print! It is so very small! Fortunately, one could hardly consider The Other Boleyn Girl

book heavy reading and I read it in about four days.

The Other Boleyn Girl

The story is told from Mary Boleyn’s point of view (the younger sister of Anne Boleyn). She is married at about twelve, but when she’s fourteen, the king starts to take an interest in her and her family tells her to forget about her husband (but stay married of course because scandal!) and let the king chase her. And maybe have some children with him. And while you’re at it, make sure it’s a boy because maybe he’ll be king someday.

This goes on for a few years and Mary does indeed manage to have two children with the king (historians apparently aren’t sure whether or not the children were really Henry the Eighth’s) and one is even a boy. But while she’s still on bed rest after the birth, the king starts to wander and the Boleyn family pushes Anne forward (not that Anne needs all that much pushing – she’s desperate for power) and she does snag them. But she’s not content to be his mistress like Mary. She makes it very clear that, if he wants her, he’ll have to put aside his wife, Catherine, princess of Spain, and marry her.

This is when all that craziness with the Pope and Henry and the Church of England starts up. It takes a number of years, but Henry finally rids himself of Catherine and marries Anne. This is extremely unpopular as now no legal wife feels very safe when the legitimate and honorable queen can be put aside for an upstart Boleyn.

Now the pressure is on Anne to get herself a son. She has a daughter. So, she legally adopts Mary’s little boy without telling her until the deed is done, which breaks Mary’s heart. Mary doesn’t care all that much about being set aside as the King’s mistress because her heart is wrapped up in her children.

Anne continues trying for her own son, but she suffers three miscarriages, the third being a horribly deformed child. The news of this last child spurs Henry to action; he’s already been dallying with other women, particularly Jane Seymour, but now he wants free of Ann since she is clearly incapable of giving him a male heir and also to prove that the “monster child” is not his fault.

Trials begin, casting suspicion on Anne and claiming that she’s involved in an adultery ring which includes her beloved brother, George. They are all hauled off to the Tower and then, despite claiming that Anne will be sent to a nunnery, Henry has her, along with the other men, beheaded.

Mary has always been close to Anne, but also very jealous of her and isn’t quite sure how to think of this. She knows that Anne has drifted into dangerous and forbidden paths to keep her crown and to get a son, so she worries how much of the accusations are true. And, since Anne was ruthless about having Catherine chucked, it does seem a bit like it was coming to her to now have her own hold on the throne yanked from under her. And Mary has her own life outside of the increasingly dramatic court; her first husband has died years before and she’s secretly remarried to a commoner who she absolutely adores.

Um, yes, that’s the whole story. Please, you already knew Anne Boleyn lost her head. That won’t come as any big surprise. I did really enjoy watching the whole thing unfold, even knowing the ending. The change in the tone of the court – from civilized and steady to out-of-control – is very well-written. You can feel it become more mad by the moment and by the time Anne gets herself offed, it’s no surprise. The events of the past decade have clearly been building to such a moment and Anne has really no one but herself to blame for this.

The The Other Boleyn Girl book cover claims that the two are best friends but also rivals and that Mary has to step aside to give Anne her chance. I didn’t read it that way – it was hard to tell that they were ever very emotionally close and Mary didn’t so much step aside as get completely shoved out of the way by Anne.

I know the movie just came out and I was interested to find that Natalie Portman plays Anne and Scarlett Johannsen plays Mary, since it’s hard for me to envision Natalie Portman playing such a power-hungry woman. The movie has gotten fairly horrendous reviews, alas, but I still might see it now just because I’ve read the The Other Boleyn Girl book.

RA asked if the book was indeed slightly smutty and the truth is there are a few pages you might want to just turn quickly. And of course part of that is that King Henry VIII was a big womanizer – the whole six wives thing doesn’t happen if you aren’t pretty interested in new and pretty wives every few years. And having your second wife convince you that you don’t need the Pope and in fact you can do whatever you want makes you a bit insane with power after a while.

Also, this is clearly only relevant to the copy I had, but the first thirty pages had fallen out in a big old chunk so the library lady rubberbanded the whole mess together for me, but I took it off to read, obviously, and then I started sticking the missing pages in as a bookmark. Very handy. And when we were in the car in Houston and my mom had nothing to read, I simply handed her the first thirty pages. It was very nice. You should go ask for that copy.

If you liked this review of The Other Boleyn Girl book, you might also like these books: