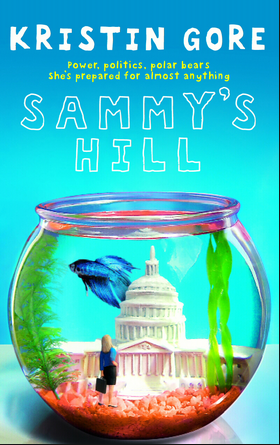 I read Sammy’s Hill and Sammy’s House as part of my rigorous course of study for the upcoming Texas Book Festival. (If reviews on the back reference Bridget Jones’s Diary, I believe one can be fairly certain that the book’s content will not, in fact, be rigorous).

Despite the non-rigor (I have never used that word so many times in my life) of both Sammy’s Hill and Sammy’s House, I found them very charming and enjoyable.

The main character, Sammy, is working as the health-care adviser to a brand new senator from Ohio. She’s a little bit on the trippy side, what with her tendency to be a bit scatter-brained, be unbelievably clumsy, a complete hypochondriac, and also paranoid. Fortunately, after the first 100 pages or so, many of these things slide to the background, as if Gore realized “hmm, all this wackiness is detracting from my main story.” (My mom emailed me about 50 pages in to say: “I can understand a girl having swirling, irrational, compulsive thoughts — but to actually take photos of yourself with a clock and newspaper and then MAIL them to yourself by certified mail just in case you’re accused of a crime?? That is VERY BIZARRE.”). So yes, she gets more normal.

Sammy meets this very charming fellow who unfortunately works for a very uncharming Senator (wrong side of the aisle and all). Sammy is willing to forgive that, but less willing to forgive how much Aaron seems to adore this senator (doesn’t he realize that this senator is
EVIL?! (and belongs to the wrong party)?). So clearly this is a rocky relationship from the get-go.

Things start to get a bit crazy as she tries to juggle her relationship, her increasingly busy job as her senator is chosen for the Vice-Presidential candidate, and a host of other life responsibilities (parents, friends, fish, etc).

I didn’t realize until I was about half-way through Sammy’s Hill that Kristin Gore is the daughter of Al Gore. Knowing this made reading the books just a bit more funny to me – is the completely insane and power-hungry president she describes based on George Bush? What about the female senator running for President? An relation to our friend Hillary C? Although I don’t think she ever specifically names a party, it’s pretty obvious that Sammy is a Democrat (I’m sorry, but working on passing health care bills to the detriment of big business? Well, you draw your own conclusion).

Anyway, I really liked Sammy’s Hill and Sammy’s House for some light, but not completely brainless reading. And I’m quite looking forward to meeting her in just a week and a half.

If you liked this review of Sammy’s Hill and sammy’s House, you might also like these books: