Over the past year, I’ve really worked to identify the places in my routine that are creating problems and then figuring out how to fix them.

These tend to be the most mundane of issues, but once they’re fixed, my whole life feels a lot more manageable.

One of those was meal planning.

I have a massive board of main dishes on Pinterest, and a cupboard full of cookbooks, but somehow, when it came time to meal plan, it just brought every other part of my food routine to a grinding halt.

It felt like it took me FOREVER to pick recipes for the week, I noticed I tended to pin a lot of the exact same kinds of recipes (how many pizzas is too many in one week?), and I couldn’t make a grocery list or actually go grocery shopping until I’d made up a menu.

It’s a first-world problem to be sure, but it was a problem that was plaguing me week after week.

I’d put off making a menu and then wouldn’t go grocery shopping so we’d have no dinner plans, not to mention none of the staples for breakfast and lunch.

(Assuming I wasn’t out of eggs. Or butter. Or milk).

Then, just after Christmas, I happened to see a post somewhere about Sweet Peas Meals.

I’d heard of it a year or so earlier when it launched because I have followed both of the bloggers who created it for years and year and had lots of success with their recipes, but hadn’t given their meal planning service a second thought because I thought I didn’t really need it.

Fast forward a year and I was honest enough with myself to know I needed some help.

It also was right as I was putting together my list of projects for 2018 and on a whim I decided one of my projects would be trying 6 months of Sweet Peas Meals.

I bought a 6 month subscription (you can use the code Janssen20 for 20% off any plan) and I was hooked in about five seconds.

Every week, you get a meal plan with six dinner recipes, plus breakfast and lunch and seasonal snack ideas, and the grocery list to go along with it. There is also a section with recommendations for prep that you can do (along with a time estimate for each section – proteins, sauces/marinades, and vegetables) to make it faster when dinnertime rolls around. 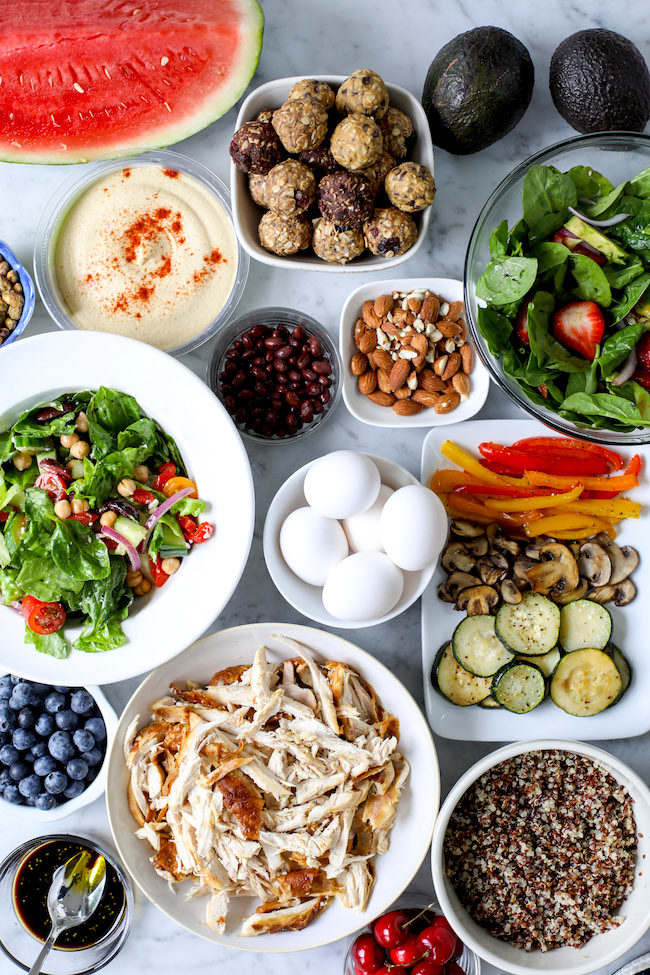 Because my real problem with meal planning has been decision fatigue, I committed to just making whatever they had on the list, no hemming and hawing about whether we’d like it or not. The only exception is that if we’re going out to dinner or have other plans, I can take out any extra meals.

Other than that, I’m sticking to it religiously.

After I mentioned it (“mentioned” = “talked endlessly”) on Instagram stories, I got about a million questions, which I’ve tried to respond to, but I wanted to put them all in one place here.

How does it compare to other meal plans?
I’ve never actually tried another meal planning service, so I have no expertise, but I’ve glanced at other ones occasionally and never felt particularly compelled by their sample menus. I was already familiar with the bloggers (How Sweet It Is and Two Peas and Their Pod) that created it and knew I liked their recipes, so it felt like a safe bet to me.

Does this one have various diet options?
It’s not designed to fit any specific kind of eating (paleo, low-carb, vegan/vegetarian, gluten-free, etc) but I feel like they are pretty darn healthy and it’s definitely increased our vegetable consumption, which feels like a big win to me.

What kind of recipes are there?
So far, we’ve had crockpot enchilada quinoa, cauliflower & chickpea taco, honey chipotle chicken bowls, thai chicken zoodle soup, sausage skillet lasagna, and salmon. Some of those are ones I wouldn’t have made on my own (cauliflower tacos? No. Also the zoodle soup), but they’ve all been FANTASTIC. Not just fine – some of the best meals I’ve made. We’ve had zero losers so far. My children asked for seconds of the cauliflower and chickpea taco filling (which blew me away) and Bart couldn’t stop talking about how good the zoodle soup was. Because I just committed to making whatever they sent, I don’t have any decision fatigue about the recipes and I just trust that they’ll be amazing. And so far they haven’t let me down, even when I’m dubious.

Do you make any adjustments?
I’ve made a few changes here and there – with the sausage skillet lasagna, I used spinach instead of kale (because I had a massive bag I needed to finish up), when I made the salmon, I just cooked them as fillets instead of threading them on skewers (because I didn’t have any skewers) and for an upcoming pasta dish, I’m just doing the filling as a topping on angel hair pasta instead of putting it in pasta shells. But basically, I’ve stuck to the recipes pretty closely.

Is it kid-friendly?
Frankly, I don’t think about my kids too much when I make the menu. I cook things that seem interesting to me and food is not my hill to die on as a parent – they can eat what I make or they can have a banana or apple. I encourage them to try things and they usually will, but if they absolutely won’t, I don’t push it. And they’ve all gone through various cycles of picky and non-picky – I just try not to make any sort of power struggle out of it. I also try never to identify things as foods they probably won’t like. All of this is a long way to say that everyone has eaten all the meals so far and not complained about them, and some of them they’ve eaten a lot of and some of them they’ve eaten less of.

Is there meat in every meal?
Since I’ve only been doing this 2 weeks, I’m not an expert, but so far it looks like there are about 2 vegetarian meals a week (and they’ve had a note with them about what kinds of meat you could add if you’re so inclined. Similarly, they note how to make most of the recipes vegetarian).

How long do the meals take to cook?
They’ve all been right around 30-45 minutes total (unless it’s a slow-cooker meal, and then it’s much faster), although I find that for many of them don’t require nearly that much hands-on time, which means I can put something in the oven and then have time to clean up or prep other parts of the meal or set the table. Also, I feel like the dishes count is pretty low – even Bart (who does most of the dishes) has commented on how much faster clean-up seems to be over the past few weeks.

How many people do these recipes feed?
They all say 4 people (or occasionally 4-6) and we’ve had leftovers every night except one (sometimes it’s just enough leftovers for me or for Bart to have for lunch, and sometimes there is enough for the whole family).

How complicated are the recipes?
I’d say pretty average. If you’ve made recipes from my blog, I’d say they are right at that level.

Does it use up all the ingredients pretty well?
Yes! I feel like I have less waste than I had when I was meal planning on my own, and not only do they have items that are used multiple times in a week, I had a few leftover items and then they showed up on the next week’s menu so I could use them up them (like half a head of cabbage or a cup of ricotta cheese), which delighted me (and kept my grocery budget lower and reduced my waste).

How has this affected your grocery budget?
So far, it looks like it hasn’t really moved it at all. Their recipes are the kinds of recipes I was already making anyway, so it hasn’t seemed like a big change. I do feel like I’m buying more vegetables than I was before, but other than that, it seems about the same. My grocery budget (which includes things like toilet paper and hand soap and ziplock bags) is usually between $80-100 a week, and the first week, it was $91 and the second week it was $93.

How much does it cost?
They have monthly, six-month, or 12-month plans and they run between $15.99 – $10.99 per month. With the coupon code (Janssen20), it’s less than $4 a week.  I figured I’d give it six months to see how it went and then I can either sign up for another six months or just start back at the beginning and go through all the meals again (although then they won’t be seasonal).

Do you print out the menu and grocery list?
Nope – I just pull up the PDFs on my computer or phone, place my grocery order for pick-up, and then pull up the recipe on the screen when I’m cooking.

I seriously feel like this has been the biggest weight off my shoulders this year so far to not have to worry about menu planning.

The new week’s menu comes every Thursday morning, so then I place an order for grocery-pickup on Thursday evening, and pick it up on Friday, and then I can do any prep on Friday afternoon if I’m so inclined (which, so far, I have not been, but I hope to do a little more pre-chopping or sauce making now that my girls are back in school and we’re on more of a normal schedule).

And then we’re all ready for the weekend and to start the week ready to roll on Monday.

I feel like it’s completely paying for itself in reduced stress on a weekly and daily basis, less food waste, and better meals.

Plus, after a couple of years of dinner time feeling pretty stressful to me, I feel like cooking has become fun again to me, which fills me with delight.

Bart would probably be tired of me talking about how great it is, but since it means we’re eating way better meals than we have in many moons, he hasn’t said a word about my over-the-top enthusiasm.

If you try it out, let me know how you like it! And if you have other questions, let me know and I’ll try to answer them.