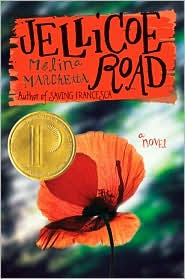 9 out of 10: Jellicoe Road is everything I could want in a book – mystery, great characters, a little romance, a strong ending. The slow start may put some readers off, but it was well-worth it for me.

I have to admit, I’ve been less than impressed with some of the Printz books in the past. A few, yes, have been terrific, but several of them have been just a little much (or little) for me.

When Jellicoe Road won the Printz award this year, I knew I planned to read it, but I still had doubts. Then I started seeing positive reviews for it pop up all over the Internet and I though just maybe it would be terrific. Then – proving once again that the personal recommendation is strongest – Elizabeth emailed me to ask if I’d read it and used the words “I really really really really loved it.” We’ve talked books enough that I know we have a lot of overlapping book love, and I vowed to move it to the top of my pile (it was already sitting in my library book basket).

I’d been warned it was a slow start, but really I thought it was more confusing than slow. There are a lot of characters and I kept having to flip back to the beginning to figure out who people were. But, spurred on by the many good things I’d heard about it, I just dealt with it and moved forward. And you should too.

Anyway, with that unconscionably long introduction, here’s the plot:

Taylor is an 18 year old girl at a boarding school near the Jellicoe Road (this all takes place in Austrialia – the author is Austrialian, so this makes sense). Nearby is a town and they call the students who go to the local high school the “Townies.” Every school year, a group of cadets come and camp/live on some adjacent property.

There’s a years-old war going on between the three groups; younger kids get kidnapped, supplies are stolen, and property is taken control of (bike paths, a garage, a club house, etc). And of course, people from the various groups secretly date each other. Of course.

Taylor has a lot of things going on besides the war – her mom left her in the town when she was young and she’s never heard from her again, and her surrogate mother, Hannah, has disappeared (perhaps murdered by the serial killer who has been picking off victims for nearly two decades in the area). Three years earlier, Taylor ran away in an attempt to find her mother and was accompanied on the journey by a runaway cadet, Jonah, who, after three days, called the leader of his group who came and retrieved them both. Needless to say, she’s gota lot on her mind.

Then, when the school year starts up again, she’s put in charge of her school’s fight in the war. She doesn’t particularly want it, but she’s not ready to give it up to the other Year Eleven kids who are trying to take it over. And worse, Jonah, the cadet who betrayed her, is the leader of the cadets this year.

Hannah, before she disappeared, had been writing a manuscript of some sort about five kids who lived on the Jellicoe Road two decades earlier. Taylor has peeked at the manuscript from time to time and realized it’s not actually in order – it just kind of jumps around.

Jellicoe Road itself switches between Taylor’s story and the story of the five kids (which is not in order in the book either). It’s these two narratives, Taylor’s full of flashbacks and the current war, and the five kids story, not in any apparent order, that makes this book slow-going in the beginning.

How do they connect? What happened to Taylor’s mother? Where is Hannah? Who are these five kids? Why did Jonah cut their journey short?

It’s a long book (over four hundred pages) and it comes together slowly, but so perfectly that I can’t bring myself to return it to the library without rereading the second half.

On the other hand, Kelly, a friend of mine from the iSchool and whose reading tastes generally align very closely with mine, didn’t really care for it, so I know it’s not a book that will appeal to everyone.

For me, though, it was a complete gem. If you’re willing to just trust the author to make it worth your while, I can’t recommend Jellicoe Road highly enough.