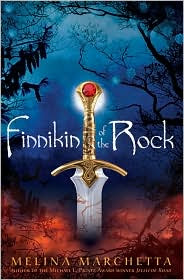 8 of 10: Full of great characters, Finnikin of the Rock is the kind of fantasy I can really love about a kingdom that’s been cursed, and Finnikin’s quest, a decade later, to break the curse and restore peace. If you like Graceling or Fire, you’ll likely enjoy this one.

So when Finnikin of the Rock came out (the first book in the Lumatere Chronicles series), I requested it immediately from the library. And never read it. I checked it out a second time. I never read it. But . . .it was fantasy! And Melina Marchetta usually writes realistic fiction! And. . .sometimes fantasy scares me, what with the complex maps in the beginning of the book and a bunch of made up words and cities and animals and . . . I just didn’t even open it.

Now, clearly, I have rectified the situation. And it was a terrific book. Of course it was.

Despite having those terrifying maps in the front of the book, this book was the kind of fantasy I can deal with, where there aren’t talking animals or something – instead it’s fairly normal except that there is some curses/spells that are cast and some people can walk through the dreams of other people. I can handle that.

finnikin of the rock by melina marchetta

Finnikin grew up in the kingdom of Lumatere (the Rock refers to the area of the kingdom where he lived), where his father was Captain of the King’s Guard. Because of his father’s position, Finnikin spent a lot of time in the castle and was dear friends with Balthazar, the heir to the throne. But then, when the boys are still fairly young (around 10 or 12, I think), the kingdom is attacked, the royal family murdered, and the king’s brother usurps the throne.

In the resulting chaos, the people of Lumatere blame the people who live in the Lumatere Forests on the border of the kingdom, slaughtering them in great numbers. When the leader of the Forest people is brought to be burned at the stake in the middle of the square, she puts a curse on the kingdom. The ground opens up and people begin fleeing the city, until the gates seal shut and a dark mist descends on the kingdom which makes it impossible for anyone who has left the city to reenter and anyone who remains in the city is trapped within.

It’s now been ten years since these events and Finnikin, who did manage to escape the city, has been wandering the other kingdoms in the land with the King’s advisor, looking for refugees from Lumatere and trying to convince one of the other kingdoms to give them a small piece of land for the refugees to gather and build a new home.

And then, in a dream, Finnikin is instructed to go to a convent-type place where someone is waiting for him. It’s a girl, named Evanjalin, and she has broken her vow of silence to claim that the prince, Balthazar, is still alive and can help break the curse and overthrow the imposter king.

Finnikin is both hopeful and skeptical. Of course he hopes that his friend is alive and that the life he knew before can be reclaimed, but he also thinks it is unlikely that this girl, who claims to be able to walk through the dreams of others, really knows what she’s talking about.

Now that I think about it, it’s really a journey book, as this little band (which grows along the way) goes in search of Finnikin’s father and his guards, the priest of the kingdom, and the prince, with the hopes of returning to Lumatere and setting things right again.

All the things that make Marchetta such a great writer of contemporary fiction are in play in this book. The characters are so richly drawn – by the end of the book, I was amazed at how many many characters were that you knew well, that were completely fleshed out, full of human flaws, but still admirable or likable. It can also make for a frustrating read because people react as real people would, not always with common sense or in the most reasonable ways.

Like Jellicoe Road, this book asks you to trust the author – things are complex in the beginning and she spins out the clues slowly. I had to just keep reading with faith that I’d eventually understand what was going on. And, what do you know, by the end I did.

Also, there is a twist at the end that took me completely off guard. Oh, how I love it when that happens (not that I’m hard to fool as a reader, but still . . .).

And it STOOD ALONE. There was no sense that this was a set-up for a sequel. There was no cliffhanger. Things were resolved (but not so neatly as to be eye-roll inducing). I felt satisfied when I closed the book.

Finnikin of the Rock is definitely a book aimed at an older YA audience. It’s not gratuitously violent, but it doesn’t skirt around the fact that war and power-struggles are messy, ugly businesses. People do horrific things and some people truly are evil. Consider yourself warned.

And now I’m going to stop procrastinating reading other Melina Marchetta books. Because two home runs should be convincing enough for me.

Copy checked out from my local library. Three times.