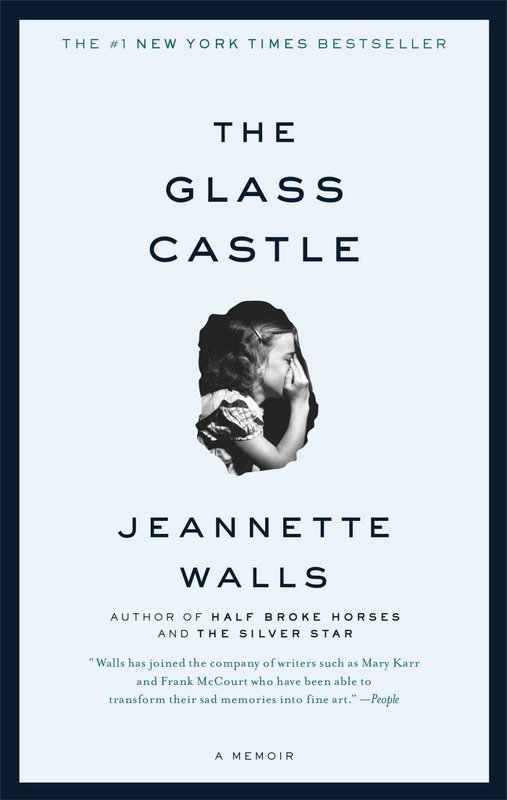 My friend Jennifer mentioned The Glass Castle by Jeanette Walls on her blog a few months ago (she said I had to read it) and then my mom emailed me two weeks ago telling me that she’d read the book and couldn’t put it down and, if I’d like, she’d mail it to me. Never one to turn down a book delivered right to my mailbox (it’s like “Netbooks”), I said yes, and it showed up on Saturday. And, as I ought to have suspected, this book was phenomenal. I raced through it, and when I wasn’t reading, I was thinking about reading.

The Glass Castle by Jeanette Walls

The Glass Castle is Jeannette Walls’ memoir about her life growing up with her unbelievably dysfunctional parents. Her dad is an alcoholic who can’t hold down a job and manipulates the family like mad to get his way. He’s a very smart man and he teaches his kids a lot of things, but he is just completely untrustworthy and can’t be counted on. Numerous times, when they fall behind on bills or he gets into trouble with the law, they pack up in the middle of the night and take off to a new town, where things seem to look up temporarily before everything falls apart again. Her mom is an artist who never wants to work, despite having a teaching license, and can’t say no to the dad, no matter what the cost is to her children. She craves excitement and detests any sort of normal life, eschewing charity or welfare, and pretending that their life of destitution is really a grand adventure.

In Welch, West Virginia, their life hits an all time low. They live an a total dump with a roof that leaks (her brother sleeps under an inflatable raft to keep from getting soaked in the night), garbage all around the house, since they can’t pay for the city garbage service, and the kids rummage through the garbage cans in the school bathrooms to find food. Jeannette describes coloring her legs with sharpie markers so that the holes in her pants won’t be as obvious. The children finally realize that their parents will never pull themselves together and if they want to get out, they’ll have to do it themselves. The three oldest children begin working and saving every penny they can in order to afford to travel to NYC and live until they can get a job. Unfortunately, after about ten months of saving, the dad finds the money, smashes the piggy bank, and spends it all.

The title comes from the Glass Castle that her dad always talks about building. It will be made completely of glass and be powered by solar panels. He draws up the blueprints and takes them everywhere, letting the kids design and tinker with the plans for their individual rooms. Later, when Jeannette is days from leaving to go to New York City, he pulls out the plans and tells her to stay so that they can build the Glass Castle. Jeannette, finally mostly free from his pull, resists and tells him that he can build it, but she’s leaving.

The story is so well-written that, even during sort of mundane happenings (not that there are many of these), you can hardly put the book down. It’s full of fascinating things and some really awful experiences too. And yet, as so many reviewers mentioned, it never appears that she’s complaining or bitter toward her parents. It’s a life she doesn’t want and eagerly escapes, but one with some happy memories too. She wants to help her parents as she escapes from poverty, but eventually comes to terms with their unwillingness to live a normal life and their desire to be free from the constraints of jobs, a real home, and established life.

This book is just plain worth reading. And it will make you unbelievably grateful for your own life.

What about The Glass Castle Audiobook?

The Glass Castle audiobook is available through Audible or as a book on CD and is read by the author, Jeanette Walls. It is not an abridged version of The Glass Castle book.

Have you seen The Glass Castle movie?

Yes! I got invited to see an early screening of The Glass Castle movie and it was tremendously well done.

I think the movie version really captured the essence of the The Glass Castle book even though some parts were altered (including adding quite a bit of Jeanette Walls’ adult life with her first husband as she remembered her childhood and interacted with her parents as an adult).

If you liked the book, I highly recommend seeing The Glass Castle movie, although it’s definitely not a movie for children.

Are there other Jeanette Walls books?

Yes! In addition to The Glass Castle, Jeanette Walls has also written a novel called The Silver Star and Half Broke Horses, which is a fictionalized memoir of Jeanette Walls’ grandmother.

If you liked The Glass Castle, you might also enjoy: