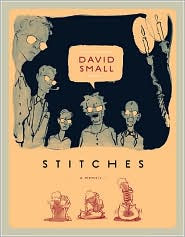 I have to say, I was just not as excited about any of the books nominated for the National Book Award this year. Last year, even though I ended up not loving a few of the titles, they all sounded at least somewhat interesting. This year? The list isn’t so hot, in my opinion.

After boldly declaring that I was going to read all the books (gulp) before the announcement, I sat around twiddling my thumbs and making zero progress.

Finally, when I got Stitches from the library, I figured I’d dive in to that one because, well, it’s a graphic novel, so I knew it would be fast. Which it was. I finished the whole thing in about an hour.

Stitches is David Small’s memoir. You may know David Small, even if you don’t recognize his name. He won the Caldecott Award for “So You Want to be President?” a few years ago, and he also illustrates many of his wife’s books (his wife is Sarah Stewart, author of such lovely books as The Library and The Gardener).

His early life was pretty horrible. His mom suffered from some pretty debilitating depression and appears not to have really cared for David at all. His dad was a doctor and did a ridiculous number of tests on David throughout his childhood. When David is a teenager, a family friend notices a growth on David’s throat and eventually he goes in for surgery. When he wakes up from the surgery, though, he finds out that the surgeon accidentally slashed his vocal cords and he can hardly speak anymore. He has a massive, ugly scar up the side of his neck – he says he looks like a poorly sewn boot. His home life continues to get worse until he finally leaves home at sixteen and begins making his way as an artist.

Obviously things work out okay for him – he’s now a very successful artist and apparently happily married, but oh. my. word. This book was so ridiculously depressing. The pictures, which have a bit of an eerie, dreamlike quality to them, don’t help. If I drank, I would have turned to the bottle to drown my sorrows after this book.

If you read many book blogs (or belong to any YA list-servs) you’ll know that everyone is all up in arms about this David Small memoir because it was published as an ADULT book and now is taking one of the five coveted spots on the list for YOUNG PEOPLE. The horror!

Kelly pointed out that the publisher actually doesn’t have a Young Adult or Children’s imprint, so all their books are considered adult, which is a fair point. On the other hand, as someone on a list-serv pointed out, the National Book Award is for literature, and the strength of this book is primarily in the pictures, unlike the Caldecott award.

I don’t know – frankly, I don’t necessarily have a problem with it being on the list, but Stitches is not a book I would recommend, and it’s almost certainly not the one I’d vote for off the shortlist this year.