Most of us don’t really want to talk about death with our children (or, you know, in general), but at some point, life is probably going to force you to address it.

Whether it’s the death of a beloved pet, a parent or a grandparent (or someone else entirely), that conversation is a tricky one to have.

These children’s books about death are gentle ways to talk about death, loss, and grief in a way that’s appropriate for children and can open a dialogue whether it’s before or after they’ve experienced the loss of someone they know and love.

Of course, I hope you’ll never need them, but if you do, these are some of my favorite titles on this hard topic. 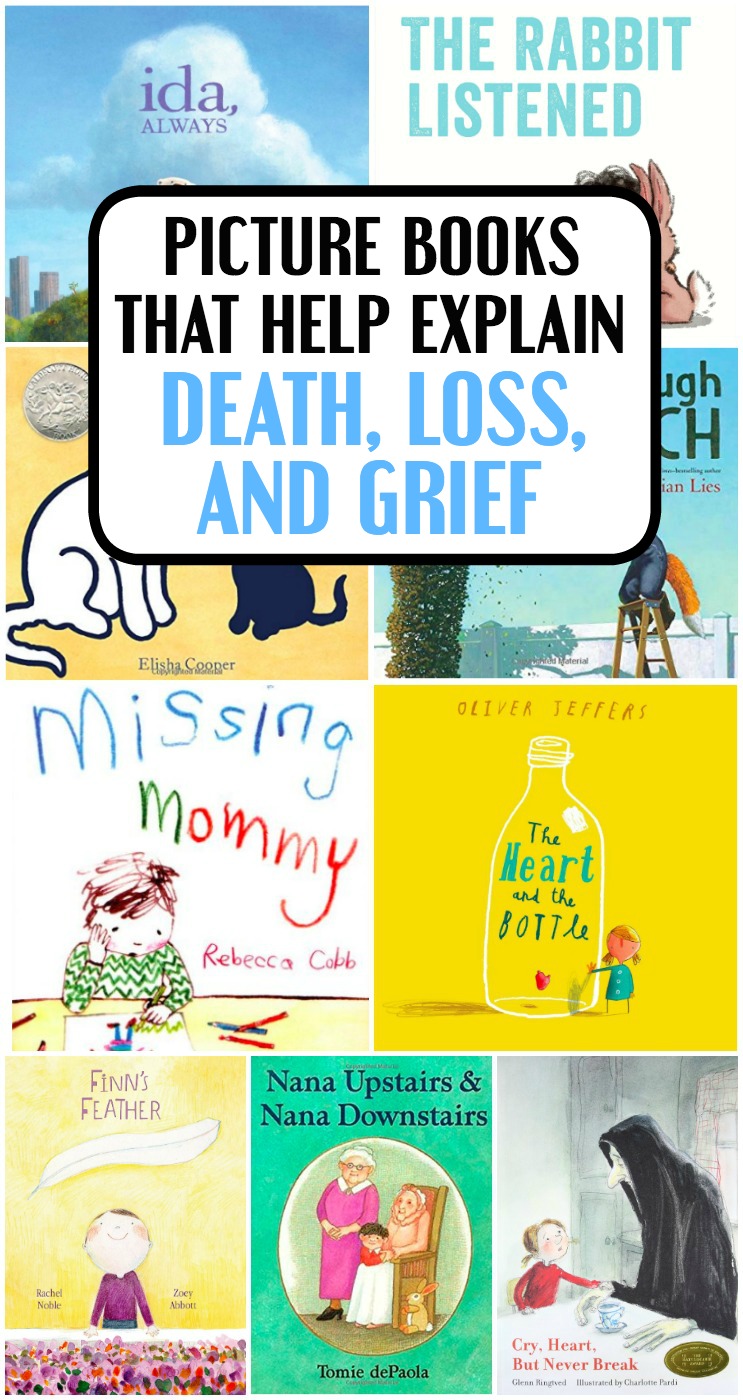 The Heart and the Bottle by Oliver Jeffers
A little girl enjoys all the wonders of the world around her, accompanied by her grandfather. But when he dies, the little girl decides the best option is to put her heart into a bottle so she doesn’t have to feel the hurt any more. But along with that hurt, comes curiosity and wonder, and sealing up her heart cuts her off from those things too.

My Big Dumb Invisible Dragon by Angie Lucas, illustrated by Birgitta Sif
I love the analogy of grief as a dragon in this book. Sometimes it’s loud and in your face and sometimes it’s just quietly sitting nearby. When a little boy loses his mom, his dragon that no one can see is constantly with him, although over time, the dragon starts to leave for periods of time. It’s a perfect book whether your child is grieving or if they have a friend or family member grieving.

The Dead Bird by Margaret Wise Brown, illustrated by Christian Robinson
You probably know Margaret Wise Brown from Goodnight Moon, but I didn’t read this book until I was an adult. It’s an unsentimental story of a group of children who find a dead bird in the park and (ignoring all the rules about touching dead animals – I kind of felt like I needed to scrub my hands just reading it) bury it and visit the grave for several days.

Missing Mommy by Rebecca Cobb
This one gets me every time. Told with simple childlike drawings and a first person voice, a little boy attends his mother’s funeral and then, in the days that follow, wonders why she’s left behind her belongings, feels angry that she’s gone, and worries that she left because he was sometimes naughty. It feels unfair that other children still have their moms. But the rest of his family helps him through his grief, reminding him that they are still a family that takes care of each other and that, even though Mommy is gone, they can remember the time they did have together.

The Rabbit Listened by Cory Doerrfeld
When something tragic happens, different animals try to help Taylor, offering to laugh or be angry or ignore it or fix it. But nothing helps until the rabbit appears and quietly sits in silence until Taylor is ready to talk and then gently listens to the feelings that come after the tragedy.

Big Cat, Little Cat by Elisha Cooper
In this Caldecott Honor book, simple line drawings and lots of whitespace tell the story of a cat. And then another cat joins the family. Big Cat shows Little Cat the ropes and the two become friends over the years until Big Cat goes and doesn’t come back. 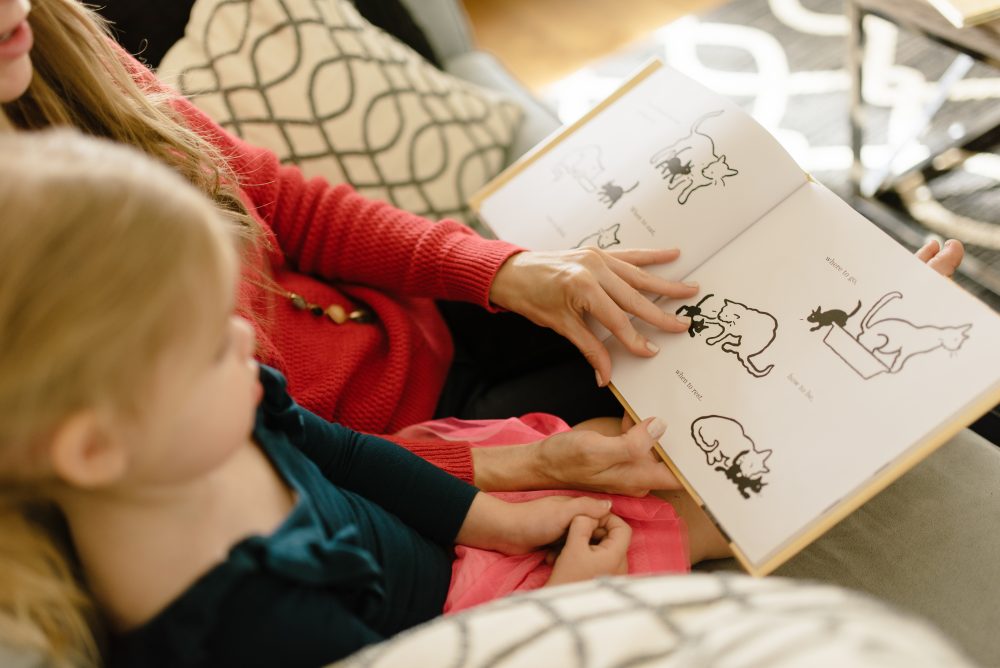 Cry, Heart, but Never Break by Glenn Ringtved, illustrated by Charlotte Pardi
This book, translated from Danish, is definitely a little unusual, but also very touching. In it, four children know that their grandmother is close to death and make a promise that they’ll keep Death from coming for her. But of course Death does arrive and helps the children understand that loss is a part of life and that it’s time to say goodbye.

Ida, Always by Caron Levis, illustrated by Charles Santoso
Inspired by a true story at the New York City Central Park Zoo, Gus and Ida are polar bears who spend their days together. Until Ida gets ill and Gus realizes she isn’t going to get better. When she dies, Gus grieves and then slowly realizes that their memories will live on even though Ida is now gone.

Finn’s Feather by Rachel Noble, illustrated by Zoey Abbott
When Finn comes outside to discover a beautiful white feather resting on the doorstep, he’s sure that his Hamish has sent it to him. As the story progresses, you realize that Hamish is FInn’s brother who has passed away. His mother and his teacher aren’t nearly as excited about it, but Finn’s friend is thrilled for him.

Grandpa’s Top Threes by Wendy Meddour, illustrated by Daniel Egneus
I didn’t realize this was a book about grief originally, but as Henry interacts with his withdrawn grandfather, you slowly start to realize that they are both missing the grandmother who has recently died. It’s such a sweet gentle book and we’ve read it multiple times in the last few weeks.

The Rough Patch by Brian Lies
When Evan’s beloved dog dies, Evan destroys the beautiful garden they created together and watches it become overgrown and abandoned. But eventually, a pumpkin grows in that garden and, taking that pumpkin to the fair, Evan discovers that in the wake of heartbreak, there might be hope and even another chance at love.

Nana Upstairs and Nana Downstairs by Tomie dePaola
I’m not sure anyone creates books that are more gentle and tender than Tomie dePaola, and this one is probably the most touching of all of his I’ve read, based on his own childhood. In it, he goes to visit his grandparents each week, but his favorite person to spend time with is his grandmother’s mother (Nana Upstairs) who is mainly confined to bed at 94. She shares candy with him and tells him stories and they both need afternoon naps. When he is four, she passes away and he’s devastated until he sees a shooting star from his bedroom window.

The Longest Letsgoboy by Derick Wilder, illustrated by Catia Chien
This gentle book follows a girl and her dog through the dog’s last day of life. Told by the dog himself, on his last walk on the earth, he beautifully describes all he sees, feels and smells.

Still Mine by Jayne Pillemer, illustrated by Sheryl Murray
This book reminds us that even when someone is no longer with us, you can still capture moments that remind you of your loved one and they are still yours.

The Treasure Box by Dave Keane, illustrated by Rahele Jomepour Bell
Going out on treasure hunts with grandpa is her favorite thing to do. The searching comes to a halt when her grandpa is too sick to come along and ends up passing away. She’s devastated when it happens and cannot open the treasure box until Grammy comes over to open it up with her.

And if you’d like a printable copy of this list of books about death for kids that you can take to your library or screenshot on your phone for easy access, just pop in your email address below and it’ll come right to your inbox!

Any other children’s books about death or grief you’d recommend? Please share them in the comments to make this post even more helpful for other families.