It’s been the most fun thing to watch Star’s reading take off this year (thanks, Savvy!)

The hardest part is keeping her in books – every night, she snuggles up in her top bunk with her book light and reads 2-3 little chapter books.

It’s a good thing we live near the library!

I asked her last week if she’d like to share some of her recent favorites and she was wildly enthusiastic!

So, here’s crossing our fingers that this is the beginning of a new series, Star Suggests! 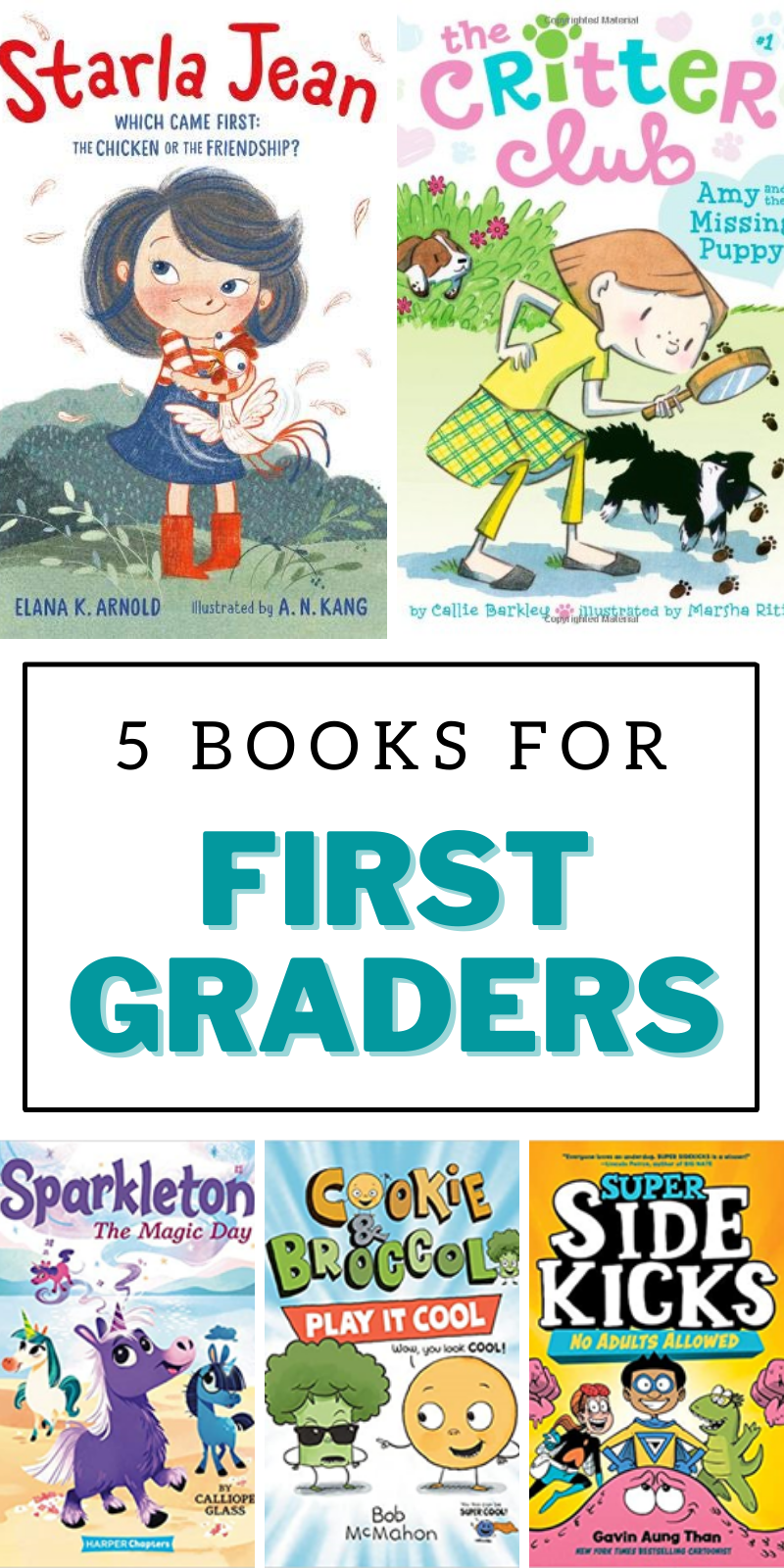 Super Sidekicks by Gavin Aung Than
144 pages
I checked this graphic novel out when I was working on this Dog Man post and before I even had a chance to crack it open, Star had read the whole thing alone, read it aloud to Tally, and then requested that I get the second book in the series from the library. So . . . I guess she liked this book about a group of sidekicks who get tired of being the sidekicks and decide it’s time to form their own superhero team.

What Star has to say:
Super Sidekicks is not too hard to read and it’s a graphic novel which is really fun. It’s very funny and I like funny things. There are a lot of good characters like Goo – he’s hilarious. I think most kids would like this book. I really want to read the next Sidekicks book.

Cookie and Broccoli by Bob McMahon
80 pages
I’m always on the lookout for more graphic novels for younger readers (you can see a whole list of our favorites here) and this one, about two elementary school friends, Cookie and Broccoli, is a delight. In this installment of the series, their friendship is put to the test when Broccoli’s math skills make him the new leader of the Cool Crowd. Can their friendship weather popularity? (Spoiler: yes).

What Star has to say:
Cookie & Broccoli is super funny. It’s a shorter, easier read – I probably read it in about ten minutes. It’s kind of like Elephant & Piggie but for a little bit older kids.

Starla Jean by Elana K. Arnold, illustrated by A. N. Kang
96 pages
I read this one aloud to Tally after Star raved about it and it was very cute. Starla Jean spies a chicken at the park and, despite her dad’s warning that it’s very hard to catch a chicken, she manages to catch the chicken (whom she immediately names Opal Egg) and brings her home as a pet. Which is delightful until someone shows up to claim the chicken.

What Star has to say:
I like that this one has big print and even though it’s not a graphic novel, it’s still really good. It has a lot of colorful pictures. It’s weird but pretty funny.

The Critter Club by Callie Barkley, illustrated by Marsha Riti
130 pages
This has probably been Star’s favorite series so far – she’s blown through nearly two dozen of them and is always anxious to see if the library has any she hasn’t read. These sweet animal-centric mysteries are just perfect for readers making the jump to chapter books – the text is nice and large with black and white illustrations on nearly every page.

What Star has to say:
This is one of my favorite series. It has black and white pictures and big print. They’re detectives and they solve problems about animals. I’ve read most of them and I’m very excited to read the rest of them.

Sparkleton by Calliope Glass, illustrated by Hollie Mengert
96 pages
This fun early chapter book series has tons of full color illustrations (think Mercy Watson or Princess in Black style) and features Sparkleton, a unicorn who desperately wants his sister to give him magic to grant wishes. He’s certain he’ll be wonderful at it. . . but, it’s maybe not as easy as he suspects. Can he undo the magic or will everything be opposite forever?

What Star has to say:
It’s half graphic novel and half not graphic novel. It has colored pictures and it’s a little bit for older kids and pretty fun to read. It’s about a unicorn and his older sister gives him magic powers before he’s really supposed to get them, and he messes them all up.