It’s been about two years since my neighbor and I started subscribing to a CSA box (if you’re not familiar with CSAs, it stands for Community Supported Agriculture, where a farm offers weekly shares of vegetables – you get very fresh and local produce and they get a steady income to support their farm).

Over the last couple of years, I’ve gotten a lot better about using it. Now there are few things that show up that strike fear into my heart (I even managed to use the very bizarre-looking kohlrabi last night in a Thai stir-fry dish).

The first week that we got it, Bart was not very impressed. I think he had visions of a boxful of the kinds of things his grandmother grew in her (extremely large) garden – berries, grapes, apples, and the occasional carrot.

Our CSA is not like that (and I kind of suspect most of them are not). It’s heavy-duty vegetables. There aren’t a lot of things to eat in there straight out of the box – most of it needs some prep.

So it was definitely a bit of a learning curve; we had to learn what some of these unidentifiable vegetables were, how to prepare them in ways we liked, and how to eat more vegetables than we ever had before.

But now, we’re big fans. If you’re wondering about taking the leap, let me try to convince you a little: 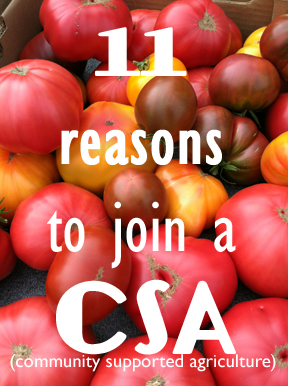 reasons to join a csa

Next week, I’ll share some of recipes I like for using up our CSA vegetables (like chard, bok choy, cabbage, arugula, and turnips) and blogs that are the most helpful in providing recipes. If you have questions about CSAs, I’d love to try and answer them (although I am far from a pro).