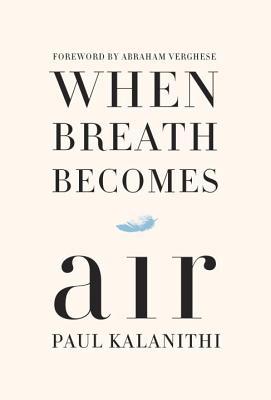 There’s nothing quite like reading on a crowded airplane while trying not to let your seatmate see tears running down your face.

When Breath Becomes Air is a memoir of a Paul, a neurosurgeon at Stanford. He was diagnosed with terminal lung cancer at age 36 and wrote an op-ed in the New York Times called How Long Do I Have Left? that went viral. I heard about both the article and the book from his sister-in-law, Joanna Godard, the blogger behind Cup of Jo, who mentioned them both as they were published.

Paul wrote When Breath Becomes Air about facing his own death and it was published last week, ten months after he died.

From his early years, he was interested in death and mortality, the meaning of life, human morality, and how those play out for people through the ages and all over the world. He did an undergrad degree at Stanford with degrees in English and Biology, as two different ways to think about life and went on to get a master’s in English. And then, as he was finishing up that degree, he decided to go into medicine where he could see first-hand life and death and their intersection.

He went to med school at Yale, where he met his wife Lucy, and then together they went back to Stanford for residency. He worked his way to the top of neurosurgery – one of the most demanding fields of medicine – and then, in his last of seven years of residency, was diagnosed with terminal lung cancer. “Death,” he says, “so familiar to me in my work, was now paying a personal visit.”

Suddenly, he’s on the other side of the doctor-patient relationship and he has to confront the realities of mortality. Of course, one of the terrible truths about cancer (and most terminal diseases) is that while you know death is on the horizon, you don’t know how far away it is. Do you have months? A year? Five years? Ten? And what are you going to do with that time? Of course, all of us know what we’re eventually going to die, but we don’t really live with that knowledge in a tangible way as we make decisions. We all assume we’re going to live to be 80 or 90. He describes it, “my state of knowledge was the same, but my ability to make lunch plans had been shot to hell.”

Paul had planned to become a surgeon-scientist but he doesn’t have enough time left to really do the kind of scientific research he was interested in – the timelines are just too long for the years he has left. He’d always wanted to write a book, but planned to do that after his medical career was over. At first he goes back to surgery but as his cancer progresses, he decides that’s not how he wants to spend his remaining time and instead dedicates the last year of his life to writing this book about facing his own death.

He and Lucy also decide they want to have a child together before he dies, and their daughter, Cady, is born eight months before Paul dies. At the end of the book, he writes directly to her, the most important thing he wants her to know about their briefly overlapping lives:

When you come to one of the many moments in life where you must give an account of yourself, provide a ledger of what you have been, and done, and meant to the world, do not, I pray, discount that you filled a dying man’s days with a sated joy, a joy unknown to me in all my prior years, a joy that does not hunger for more and more but rests, satisfied.

While this book is basically going to break your heart right in half, it’s also surprisingly funny. Talking about his first experience in labor and delivery he says, “An Anne Geddes photo this was not.” Listening to a doctor describe making the tough decision about delivering twin babies at 23 weeks and 6 days: “What a call to make. In my life, had I ever made a decision harder than choosing between a French dip and a Reuben?” After his diagnosis, he wrote a friend, “The good news is that I’ve already outlived two Brontes, Keats, and Stephen Crane. The bad news is that I haven’t written anything.”

Paul died last March, with this book not quite completed – the book deal came through only three months before he passed away – and his wife Lucy writes the epilogue and fulfilled his wish to have it published.

I tend to be a little hesitant about books that are described as having beautiful writing (doesn’t that sometimes seem to be code for, “no plot and also very long and wordy?” I know; I’m a weak reader) but there seems to be no other words to describe When Breath Becomes Air.

There’s no doubt that this was written by someone who loved literature and had spent much of his life engaging with the best writers in the English language. He references many books, poetry, and great authors, and it adds an extra layer to his own really extraordinary writing. But it never feels forced or heavy-handed or like he’s trying to be the next great American author. It’s a completely engaging story of his life and experiences, that happens to be beautifully written. It’d be a perfect book to pair with Being Mortal and would make a phenomenal book club choice.

Check back in December, and I’m almost positive that When Breath Becomes Air will be in my top 10 for 2016 – it’s hard to imagine that I’ll read ten books that are better than this one. Frankly, there might not be any.

Previous Post: « 7 Children’s Books about Food with Annie’s Homegrown
Next Post: My Best Tricks for Scoring Deals on ThredUp »