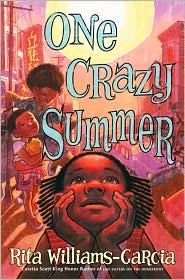 7 of 10: I liked One Crazy Summer, but not as much as I expected to. This story about three girls visiting their long-absent poet mother in California and getting swept up into the Black Panther movement didn’t resonate quite as much as I would have liked.

One Crazy Summer is one of the National Book Award finalists and one that has been getting considerable buzz from the book world. I tend to really like middle grade historical fiction and this is time period I’m particularly interested in, so I went in expecting to enjoy it.

And I did. But not as whole-heartedly as I would have liked.

one crazy summer by rita garcia-williams

The story of One Crazy Summer is told by eleven-year-old Delphine, who acts as mother to her two younger sisters since their mother walked out on them, seven years earlier. They all live in New York with their father and grandmother (the grandmother, as you can imagine, deeply disapproves of their mother and makes no secret about it). Delphine has heard rumor that her mother left because her father wouldn’t let her name the new baby (who ended up being named Fern), but she has no idea if this is true. She has some memories of her mother, mostly of her writing poetry on the wall, but they are few and far between.

And then, this summer, Delphine’s father decides that it is time for his daughters to get to know their mother and he sends them all to California for a month.

To no one’s surprise, the mother is NOT thrilled to have three children suddenly descending upon her very quiet and private life, and the girls’ dreams of visiting the beach and Disneyland and meeting movie stars are quickly dashed.

Instead, their mother sends them off each day to a Black Panther summer camp, mainly because they serve free breakfast. The girls don’t really want to be involved, but Delphine slowly starts to take an interest in the movement and the world around her.

The character development was really excellent for both Delphine and Fern, but the middle sister I found quite flat and unlikable and the mother I also thought didn’t get enough development. When their feelings toward her change dramatically by the end of the book, I thought, “How did we get here?” It was just too sudden and unexplained a switch.

As I’ve mentioned in other book reviews, it makes me crazy when the pacing of the book feels off to me (when three chapters cover an afternoon and then two weeks go by in a paragraph) and this one did that. Maybe this is a pet peeve specific to me, but this is a problem that really unbalances me as a reader and makes it harder for me to really connect with a book.

On the other hand, the writing is quite beautiful and I enjoyed the reading of One Crazy Summer (which I can’t say at all for Jumped which is also by Garcia-Williams and ALSO was short-listed for the National Book Award last year).

And One Crazy Summer had such an excellent sense of time and place; I felt like I really was in California in the middle of a hot sixties summer. I really appreciate a book that has such a strong and rich setting.

So far, my vote is for Mockingbird, but I wouldn’t die of disappointment if this one won either.