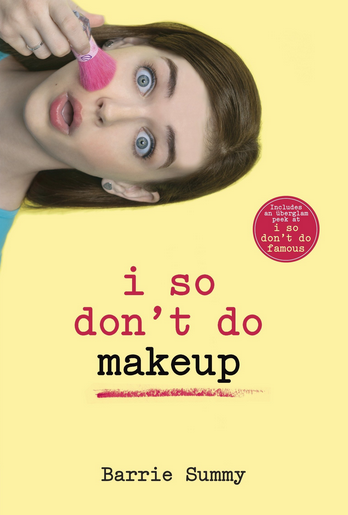 7 of 10: I So Don’t Do Makeup wasn’t my favorite book, but it was amusing enough and if I was a middle school librarian, I certainly would be buying the whole series.

Here’s the problem with middle-schoolers – they are both delightful and also annoying as can be. A book with a realistic middle school heroine is going to struggle with that same problem. And, yes, I So Don’t Do Makeup did.

I so don’t do makeup by barrie summy

This is the third book in a pre-teen mystery series starring Sherry Holmes Baldwin. Her mother, a detective, was killed a year or so earlier and now is a ghost detective, and the two of them work together to solve mysteries.

In the first book, Sherry discovers her mother is a ghost and all the rules that govern the ghosty lifestyle, so that’s not explained in great detail in this one (which, frankly, makes me want to go back and read the first one).

In this installment, Sherry has a sleepover where she and her friends try out some new makeup which they have some serious reactions to the next morning. When they return it to the mall kiosk with the news that it had such an adverse effect, they learn that several people have returned their makeup reporting pain and suffering.

Sherry is convinced that someone is out to sabatoge the kiosk (which is new and so far very successful), and she’s determined to figure out who did it, even though the ghost patrol keeps telling her to lay off (her mom is up for some international position, and they are determined that Sherry not goof it up for her).

I’m honest enough to know that while I So Don’t Do Makeup didn’t thrill me as an adult, I would have almost certainly loved it as a pre-teen. It’s like Nancy Drew meets Sweet Valley Twins (oh yes, I loved those Sweet Valley books as a kid).

If you liked this review of I so don’t do makeup, you might also like these books: