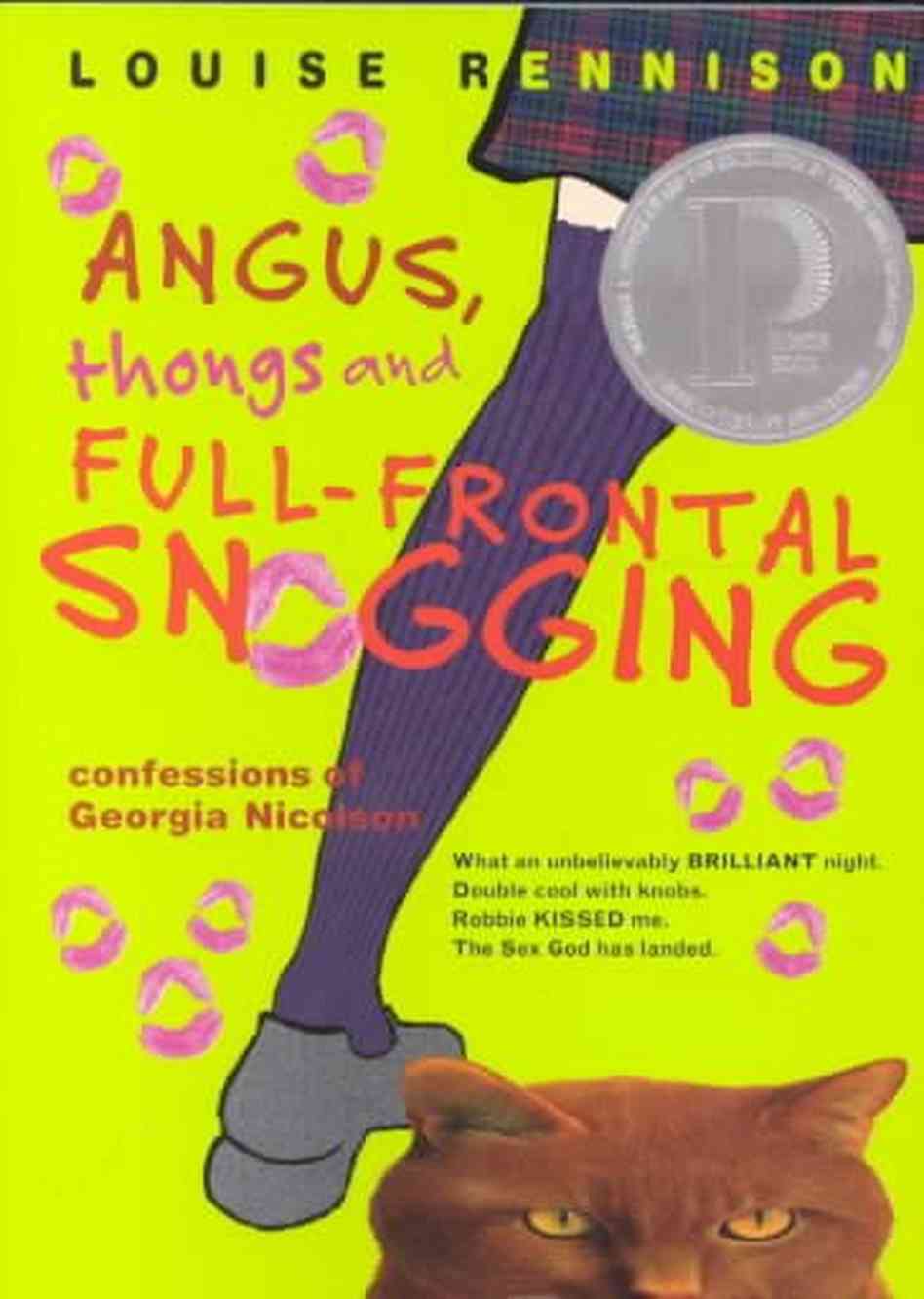 Back in those dreadful, never-to-be-remembered days when I rode my bike to work, I listened to a lot of audiobooks. Some of them were good, others were lousy, but few of them were enough to make me forget that I was biking 5 miles in the Texas summer heat.

But when I picked up the first Georgia Nicholson book (the unfortunately named “Angus, Thongs and Full-Frontal Snogging

“) on CD as part of my half-hearted attempts to get through all the Printz medal books, I surprised myself by laughing out loud as I biked. These books are serious. NOT.

Whenever I tell someone about these Georgia Nicholson books, I link them to a little blurb by the author about how she came to write these books:

One of the things I did was to write for a London newspaper. I used to write articles on just everything I liked really. It was quite good fun. I wrote an article called “Dating Over 35” and how pointless it is, because if you’re on your own after thirty-five, that’s because there is something wrong with you.

Anyways, I got a call from Picadilly Press and they said, “We loved your article, it was so funny, would you like to write a book?” And I thought, “Ooh, how sophisticated!” And she said, “No, no, no, we’d like you to write a teenage girl’s diary.” And I said, “Oh, I’m quite flattered, but why me?” And she said, “Well, we read your article and we thought that it was so self-obsessed and so childish that you could really do a good job.”

Yes, that pretty much tells you all you could ever want to know about this series (currently at nine titles). The titles are generally scandalous, but the books themselves are not.

Basically, they just chronicle Georgia’s marvy fabbity fab fab fab life in hilarious detail. She’s always in and out of love with various guys, including my personal favorite, Dave the Laugh, who at one point, after she’s dumped him unceremoniously, tells her how he might have loved her and could he have one little last kiss and, when she turns around in shock, he’s wearing a giant red clown nose. I totally snorted with laughter.

The books are full of made-up words like “maturiosity” and “glaciocity” and excellent British terms like “duff” and “loo” and then just silly nicknames like “Astonishingly Dim Monica” and “Nauseating P. Green.” There are ongoing jokes in the books, like how her best friend Jas wears tremendously big knickers or how Wet Lindsay has a very tiny forehead.

After reading the first four Confessions of Georgia Nicholson, I told Kayla about them. And a day or two later I got a text message from her saying that she was forever in my debt for me recommending these books. She is, of course, and I intend to remind her of it often.

Pretty much all our conversation these days take place in exclusively Georgia Talk – she says “Hello, my little pal” and I say that the newest book is vair vair amusing and she says, yes, she is laughing like a loon on loon tablets. And then we both do the Lets Go Down to the Disco dancing in our respective locations.

They’re silly books, yes. They make Twilight look like high-brow literature, but oh my heavens, I lurve them and for late-night, weekend, or beach reading, they cannot be matched.

Forgive me if I’m right, but I think you will laugh. A LOT. You’d be mad to miss these books.

As for me, I’m away laughing on a fast camel.