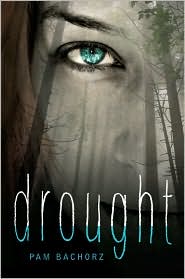 8 of 10: Ruby and her mother belong to a congregation that is under the thumb of a cruel overseer, collecting water with magical properties, while they wait for Ruby’s father to come rescue them. Drought surprised me at every turn – it wasn’t at all what I’d expected.

I have a hard time writing about books when I can’t fully grasp what is supposed to be a revelation in the book and what is just giving a brief overview. This book is one of those ones where I have no idea if I’m giving away spoilers or not. Consider yourself warned.

Ruby and her mother live with a small congregation of people in a community in some unspecified forest-y area in, I assume, the eastern United States. They spend all day, every day collecting water from plants. If there is anything worse than doing this kind of laborious, boring work, it’s doing it for 200 years. Oh yes, that’s right. . . the reason they’re collecting the water is that it has magical properties that keeps them from aging at a normal pace. After 200 years, Ruby is only about 16 physically.

Except, of course water from plants doesn’t have this mystical power (I mean, c’mon, that would be silly). It’s Ruby’s blood, added to the water, that makes this happen (it also heals wounds and makes plants grow like mad (this is, of course, not ludicrous at all)).

Ruby’s father, Otto, whom she has never met, also had this magical blood. He’s the one who formed the congregation and he disappeared 200 years ago. He left behind several vials of blood, which Ruby’s mother has distributed a drop at a time, heavily diluted, to the congregation, allowing them to continue living while they wait for Otto’s promised return.

His blood is long gone, though, and now Ruby is the one who provides the mystical water (although most of the congregation is unaware that it’s her blood in the water now).

Unfortunately, Darwin West, a man from her mother’s past, followed the congregation to the forest when they fled after Otto’s disappearance and has found out about the magic water. For the last 200 years he has been forcing them to collect the water for him (he then sells it off for a ludicrous sum). It’s when he discovers them living in the forest that Ruby’s mother came up with the water collection story so that Ruby is protected (she sneaks to the water barrels every few nights and puts blood in them).

Life is pretty horrendous for the congregation – they get little food, a lot of physical abuse from Darwin and his guards, and pathetic little huts, all of which is on top of the backbreaking work of collecting water from plant leaves. Also, they continue to live as if it’s the early 19th century – they’ve never seen a television or indoor plumbing or any of the technological advances that have taken place in the two centuries since they fled into the woods. Yet, they submit, just waiting for Otto’s promised return.

Ruby’s not such a fan of all this waiting around, working herself to the bone and watching her mom get beaten up on a constant basis. And it kind of comes to a head when one of the new guards becomes friendly with Ruby and offers to help her escape. She desperately wants to (she dreams of perhaps finding Otto and bringing him back to rescue everyone else), but she knows if she leaves, everyone will die without her blood.

Some of the things don’t make a lot of sense. Why does Darwin live in such rural conditions and live in such fear of the guy who buys the water when he’s the one who is collecting the water? And how is it possible that in 200 years living under armed guard, they’ve NEVER gotten caught putting blood in the water cisterns?

And it’s a hard sell to have it keep coming back to “we just have to wait for Otto” when things are SO bad and when it’s been 200 years (and, as far as I could tell, it’s not like he said he was coming back – he just left the blood and took off. The congregation just assumes the blood vials meant he wanted them to stay alive until he returned).

But I liked it anyway – I was so curious what was going to happen and despite my frustrations with Ruby, I also felt a lot of sympathy for her. Despite the terrible conditions, she’s also never known anything else. Hard to run away to an unknown world when you’re leaving behind everything and everyone you know. Harder still if you’re going to sentence them all to death (although after 200 years of collecting dew in a cup, death seems like it might look quite appealing).

Drought by Pam Bachorz was just so unusual. Despite the supernatural angle to it, it doesn’t feel at all mystical. I found it incredibly easy to suspend my disbelief for the mystical water bit. Frankly, it’s the “we will just sit around and wait” angle that I had a harder time swallowing. This Drought book was just nothing like what I expected and so different from much of what I’ve read in recent years – I just couldn’t put Drought down, even when I wanted to throttle the characters.