Anne Morrow Lindbergh wrote more than a dozen books, but none have been as popular or beloved as Gift from the Sea, her timeless reflections on being a woman, wife, and mother 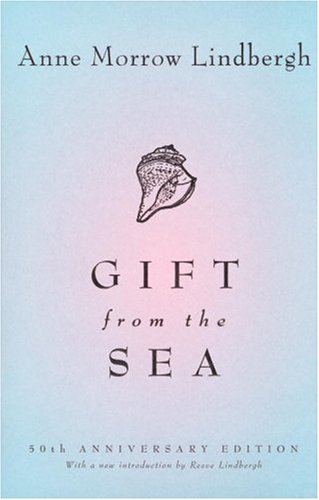 Gift from the Sea was my July pick for Tell Me What to Read, so predictably I’m writing about it here five seconds before August comes to an end.

Gift from the Sea is one of those books that I have heard about my entire life and meant to read for. . .ever. But somehow I’d just never gotten around to it, so when it got recommended in the latest round of Tell Me What to Read, it was an obvious choice.

Just before I went to NYC, I downloaded the audio version and was surprised to see how short it was. It was three parts, with each part running only about 45 minutes. Listening on double speed, that made for just over an hour of listening.

That’s a podcast, people! I’m a little embarrassed it took me 30 years to get around to it.

It was particularly interesting to read this because balance and having it all are such huge buzzy topics today, and this book, written half a century ago, deals with the same sorts of themes (but in a much less click-bait-y type of way).

gift from the sea by anne morrow lindbergh

Anne Morrow Lindbergh had a busy life – she was an award-winning writer and aviation pioneer in her own right, the mother of five, plus the wife of an American hero, Charles Lindbergh (and they’d had their oldest baby kidnapped from their home, with a huge media storm surrounding the event and the subsequent hunt for the baby and eventual discovery of his body a few months later). So . . . she knew something about stress, pressure, family relationships, and work.

In Gift from the Sea, she spends a few days away from her family in a beach house near the sea and this book is her musings on the different stages in the lives of women, with really beautiful thoughts about marriage, aging, mothering, solitude and happiness.

It was so strange to read this book written so many decades ago and think, “This is still unbelievably relevant.” I can absolutely understand why its a book so many people read every year or two throughout their lives (also, it just wouldn’t take you very long to get through it).

I really loved the audio version – it was read by the most SOOTHING narrator and it was the perfect thing to listen to as I packed late at night before my trip and then as I got ready in a quiet hotel room in New York, but I’ll admit I wished for a paper copy. I’m not a huge underliner/note-taker but I think I would have marked up half this book. There were just so many things that really hit home to me.

Have you read Anne Morrow Lindbergh’s Gift from the Sea? I’d love to hear what you thought – I’m so glad to have finally read it!

Now on to The Fifth Avenue Artists Society.

If you liked Gift from the Sea by Anne Morrow Lindbergh, you might also like these books: