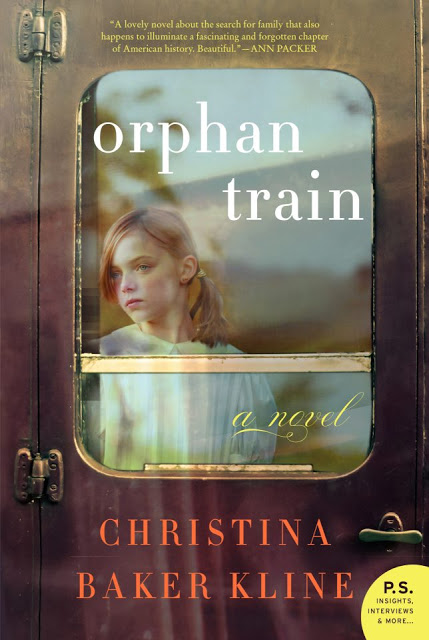 Orphan Train was one of the 11 books on my list this summer (if you’re keeping track – and I hope you aren’t – I’ve now read a whopping four of them).

The hold lists were FOREVER long for it, and when I got a Kindle copy of it from my library, I knew there was no way I’d be able to get it renewed in the next year, so I resorted to turning my Kindle on airplane mode until I finished so it wouldn’t automatically return to the library (this also meant I couldn’t download any NEW books, so I had multiple incentives to fly through this book).

But once I was a couple of chapters in, no incentives were needed because I was completely sucked into this story.

In fact, one night, Bart fell asleep while I was still getting ready for bed and in the morning he commented on what a great night sleep we’d had since we’d gone to bed so early and I admitted that I’d stayed up an extra hour or more reading Orphan Train after I realized he was asleep.

There are two story lines going on here and the narrative switches back and forth between the two.

The first one follows Molly, a seventeen-year-old in Maine who has bounced from foster home to foster home and now finds herself about half a step from getting sent to juvenile detention for stealing a book. With her foster family already not thrilled to have her, Molly knows she just needs to keep it together until she turns 18 and is out of the system, so she finds a community service project helping a rich old lady, Vivian, sort through ten bazillion boxes in her attic.

The other story is of a little Irish girl, Niamh, who comes to America with her family in the early 1900s and then finds herself alone when her entire family is killed in a tenement fire. She’s put on an orphan train headed to west, where she and hundreds of other children hope they’ll be adopted. This story follows Niamh from those early days on the orphan train (she’s about 8) all the way through her adult life.

As you can probably guess, these two story lines eventually intersect. Really, both stories are quite good, but Niamh’s story was significantly more engrossing to me (in part this is because it takes place over decades, rather than just a few months like Molly’s story).

It’s hard to even imagine how horrific life was for some of these children (I kept telling Bart while I was reading it, “Our girls have NO IDEA how good their lives are”), and even the ones that end up in good situations are still children who lost their whole families and are being plunked down in a strange place with people they don’t know. It just absolutely boggles my mind, especially how resilient most of these children were.

I’d read the Orphan Train Quartet by Joan Lowery Nixon when I was a child, so I had some familiarity with the concept of orphan trains, and it was really fun to be engrossed in that time period again.

Orphan Train has been a major bestseller since it came out about three years ago, and I’m so glad to have finally read it – it was so interesting, moving, and totally engrossing. I need to look up some other books on this topic (or just go back to the Orphan Train Quartet!).

A warning that there is one pretty awful scene about halfway through the book – I didn’t feel like it was played for shock value, but if you need a trigger warning, consider this it.

Have you read this? I’d love to hear what you thought!