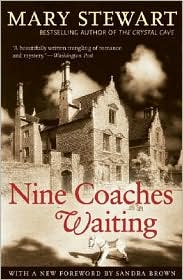 All the quotes on the back that said Nine Coaches Waiting was like Rebecca. And it totally is – beautiful/creepy old house, odd marriages, intrigue, love story – I loved this Gothic romance. Rebecca meets Jane Eyre. Highly recommended.

I suffer from a chronic problem where I read ten pages of a book, don’t get sucked in immediately and then have a hard time returning to it. I had to renew this book three times AND check it out a second time. But! When I finally sat down and read more than 15 pages, I was immediately sucked in. I flew through this book in two days.

The story follows Linda, a girl in her twenties who was orphaned some ten years earlier, while living in France with her parents. After their deaths she was returned to an orphanage in her native England where she has lived ever since. She’s been working as a tutor, but not been particularly happy there and so when a chance to be a governess for a small boy in France comes up, she leaps at the chance.

For some reason, during the interview, though, she gets a little bit of the sense that the employers don’t want someone who knows French and so she doesn’t reveal that she is completely fluent or that she lived in that country for much of her life. This makes it a bit awkward for her as she has to pretend to be picking up French slowly and to also not understand the conversations buzzing around her.

The boy, Philippe, she’ll be acting as governess to is also an orphan. His father was the oldest of three brothers, one of which now is his guardian and the other who acts as caretaker to the estate that Philippe will inherit when he comes of age. The guardian is currently out of the country for work for a few months and Phillipe is now staying with the other uncle, Leon, and his wife at the estate.

And they have a son of their own, although he’s an adult. And not only of the tall, dark and handsome variety, but also of the swanky, fast car driving variety. What’s a poor governess to do but fall in love with him?

Except. . . then there is an attempt on Philippe’s life and while it’s deemed accidental, Linda isn’t quite so sure. And so, now instead of swooning over devilishly good-looking French men, she’s looking over her shoulder and worrying about Phillipe.

This was just a really fantastic book. The pacing was fast, the plot was simple but not obvious, and the characters were excellent. Linda is quiet, but she is so capable and when things get tense, she steps up. I loved her.

And there is such ATMOSPHERE to this book. I could have sworn I was at an old French castle/manor, with sweeping grounds and winding roads. (Sadly, I was actually sitting on my couch).

If you know anything about me, you know that I am the world’s largest wimp. So it is telling that I was so engrossed in this story that even though I knew it would freak me out to read it late at night when Bart was gone, I did anyway. And then I lay in bed certain I was going to be murdered. It was worth it.

Copy obtained from my local library (and twenty cents in late fees paid on it. The shame!)