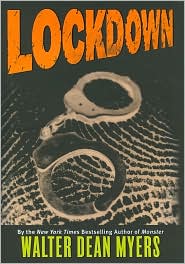 7 of 10: Lockdown is the story of a young teenager in juvenile detention, trying to get his life back on track. It’s neither as depressing as it could have been or as eye-rolling optimistic as you might expect.

This book was kind of the opposite of One Crazy Summer for me. I expected to love that one and ended up liking it. In the case of Lockdown by Walter Dean Myers, I expected to hate it and ended up quite enjoying it. Oh that “can’t judge a book by it’s cover” saying – it will always come back to bite you.

Reese is serving a two year sentence in a juvenile detention facility for stealing a prescription pad from a doctor’s office and selling it to a drug dealer who, when he was arrested, sold Reese out in about three seconds.

The jail staff sees Reese as being a little bit more together than some of the other inmates, someone who might actually have a future and so they use him in a work-study program where he spends a few hours a week at a retirement center, mainly just helping clean up and do janitorial kind of labor.

But despite threats that he’ll get his privileges taken away or have his sentence extended or perhaps get shipped off to an actual real adult prison, Reese has trouble staying out of fights. This makes the wardens CRAZY because they worry it’ll sabotage the work-study program for the future. They keep telling him that he has a future and that these other boys know it and want to keep him from straightening his life out because it puts the blame back on them for not being able to hold their own lives together.

Reese recognizes all this, but it’s hard to think about those things when someone is giving him a hard time or picking a fight. And of course, there’s his nagging concerns that when he DOES manage to get out, he won’t be able to stay out of jail, what with everyone in his neighborhood doing drugs, and his family’s mess of a situation (his mom is a drug user and his dad was physically abusive before disappearing entirely). And he’s too young to get a job and move out. Plus, he has a younger sister who really wants to make something of her life and he’s determined to help her do that if he can.

And he’s starting to make a cautious friendship with an old man at the retirement center. At first the man is very racist, but eventually they warm to each other and Reese starts to realize that everyone has issues to deal with.

It may come as no surprise to you that I have no experience being a black teenage boy from a poverty-stricken family with an abusive father and a drug-using mother, but from my comfortable middle-class couch, this seemed like a remarkably realistic book.

Sometimes books like this just irritate me because you feel like it’s all the main character’s fault, but this one does a remarkable job of making Reese a sympathetic character, while owning up to his own flaws.

There is some swearing in Lockdown, but it’s pretty minimal, which both surprised and pleased me. Sometimes these kinds of books can be insanely language-heavy in an attempt at realism and I appreciated that this was not one of them.

With three books now read from the finalists, my vote still sits with Mockingbird, but this wouldn’t be the worst choice either.

If you liked this review of lockdown by walter dean myers, you might also like these books: