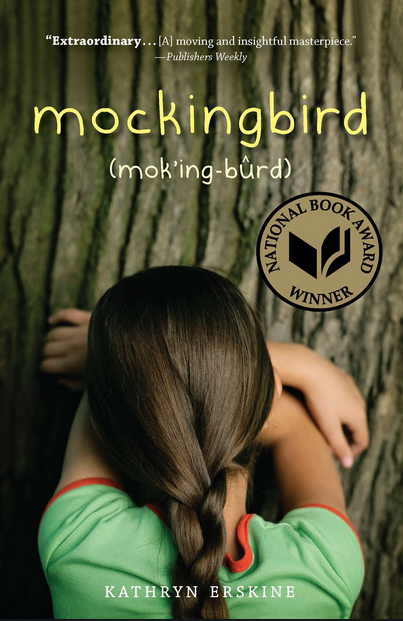 9 of 10: Mockingbird by Kathryn Erskine, about a girl with Asperger’s syndrome whose brother was recently killed in a school shooting, manages to be meaningful, appropriate, and even (surprisingly) funny. I was far more impressed with this book than I expected to be.

Look, if you want to talk about a book that has a downer of a premise, it’s this one. You’re just asking to be depressed. And yet this book is impressively upbeat, without seeming forced. Everything about this book works.

The author, Kathryn Erskine, lives in Virginia and in the aftermath of the Virginia Tech shootings, she wrote this book about a girl dealing with the death of her brother (although he was shot in a middle school, rather than at a college).

Caitlin is ten years old and has Asperger’s syndrome, so she reacts differently to the death of her brother, Devon, then other people might. Devon was the one who helped Caitlin function more normally, explained why people acted and reacted the way they did, and generally was just a terrific older brother to her (the kind you’d desperately hope you had if you had a child with special needs).

The title of the book came from, as I’d expected before even opening it, To Kill a Mockingbird, which instantly endeared me to it, as TKAM is one of my all-time favorite books. Devon loved the movie and liked to compare their family to the family in the movie (Devon and Caitlin’s mother died a few years previously of cancer). Devon even called Caitlin “Scout,” which was appropriate also because Devon was obsessed with the Boy Scout program and desperate to earn his Eagle.

Caitlin hears the word “closure” in one of the television stories about the shooting and becomes obsessed with finding it, hoping that her dad can find some too. But when she comes up with various plans of how to find closure, she keeps running into dead ends – her dad just cannot bear to face some of the realities of their new life.

I love the way the phrases Caitlin is told all the time are all capitalized, every time she uses them: “I Look At The Person” and “She doesn’t Get It.” You get a glimpse of the way her world looks – the things she hears over and over again from adults and the way she’s cataloged them away in her mind – without being beaten over the head with it.

I also really appreciated the way that Erskine portrays the people that Caitlin interacts with (Mockingbird is written in first person from Caitlin’s point of view). Some of them are mean, some of them don’t really know how to deal with Caitlin’s behavior, and some of them are delightful and natural with her. It’s so real and gave me a lot of insight into the way I interact with others, but it doesn’t feel at all preachy, which is what I tend to really shy away from.

I’ve read a few middle grade books where a main character has some sort of autism spectrum disorder, and I’ve wondered how children respond to those books. Happily, only a few months after I read The London Eye Mystery on my own, it showed up on the Massachusetts Children’s Book Award list for this past year and because of my reading of the first chapter to a few classes, two separate fifth grade classes ended up reading it as a class and both teachers told me their students really really loved it.

Of course, you can’t say that because people liked book X which happened to contain a character with autism, they’ll automatically like book Z, but I am inclined to think that this book would be well-received by its intended audience.